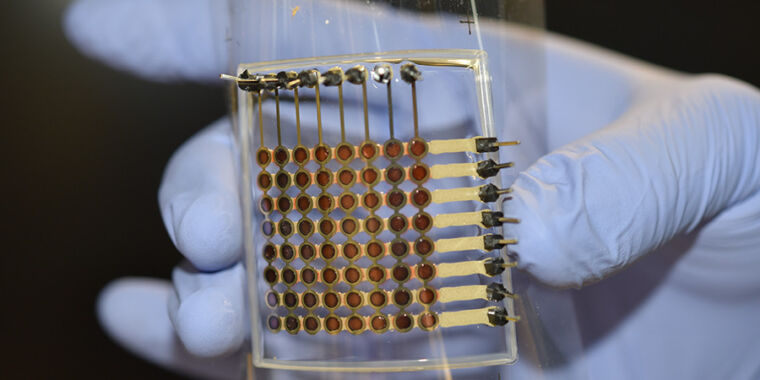 Laptops and phones with OLED displays boast rich colors at high contrasts—but they come at a premium price. Researchers from the University of Minnesota Twin Cities (UMN) say they’ve found a potential solution to that price barrier by using a 3D printer that could eventually lead to people making their own OLED screens at home.

In a study published in Science Advances on Friday, the researchers used a custom-built printer that fits on a table and “costs about the same as a Tesla Model S,” Michael McAlpine, a University of Minnesota professor in the Department of Mechanical Engineering and senior author of the study, said in a statement accompanying UMN’s announcement.

While OLED panels are typically made in large microfabrication facilities by big companies like LG Display, the research could eventually result in hobbyists being able to make cheap OLED panels in their own workshops, according to the university.

“The nice part about our research is that the manufacturing is all built in, so we’re not talking 20 years out with some ‘pie in the sky’ vision,” McAlpine said. “This is something that we actually manufactured in the lab, and it is not hard to imagine that you could translate this to printing all kinds of displays ourselves at home or on the go within just a few years on a small portable printer.”

The recently printed flexible OLED points to use for such displays beyond smartphones and laptops and into big-screen TVs and monitors, too.

OLED panels have been 3D printed before, but not at this level of success. UMN referred to previously “partially printed” OLED panels that depended on spin-coating or thermal evaporation to be used in real devices. The authors of the new paper had also used 3D printing to make a prior OLED screen, but it struggled to achieve uniform light-emitting layers.

But by tweaking the process to include two different types of 3D printing—spray printing for the active layers and extrusion printing for the electrodes, interconnects, insulation, and encapsulation—the researchers were able to create six layers to make a flexible OLED panel measuring approximately 1.5 x 1.5 inches with an 8 x 8 grid of functioning pixels that could display legible text.

“The device exhibited a relatively stable emission over the 2,000 bending cycles, suggesting that fully 3D-printed OLEDs can potentially be used for important applications in soft electronics and wearable devices,” Ruitao Su, an author of the study, said.

Next, the researchers will work to make 3D-printed OLED panels brighter and with higher resolutions.

Of course, even the most serious hobbyists will struggle to find a 3D printer of the class the UMN researchers use. However, should the technology become more accessible, we could be looking at many interesting maker projects—and maybe even the option to repair your own OLED screen next time you drop your phone or laptop.