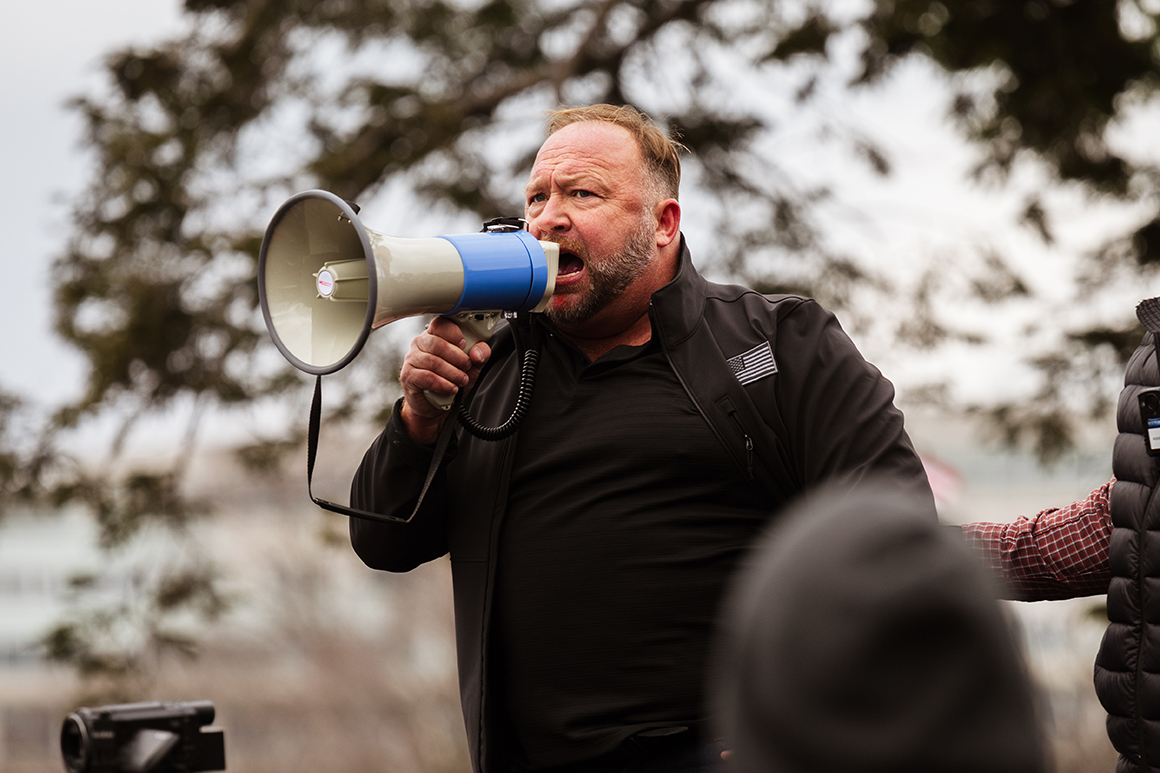 A Connecticut judge found Infowars host Alex Jones liable by default Monday in a defamation lawsuit brought by parents of children killed in the Sandy Hook Elementary School shooting over the conspiracy theorist’s claims that the massacre was a hoax.

The ruling by the judge, who cited Jones’ refusal to abide by court rulings or turn over evidence, means a jury will determine how much in damages Jones should pay to the families.

Shortly after the judge’s decision, Jones went on his show and said he’d been deprived of a fair trial.

“These individuals, again, are not allowing me to have a jury trial because they know the things they said I supposedly did didn’t happen,” he said. “They know they don’t have a case for damages. And so the judge is saying you are guilty of damages, now a jury decides how guilty you are. It’s not guilty until proven guilty.”

Judge Barbara Bellis took the rare step of issuing a default judgment in the case because she said Jones and his companies, Infowars and Free Speech Systems, had failed to turn over documents including records that might have showed how, and if, they had profited from spreading misinformation about the school shooting and other mass killings.

Messages seeking comment were sent to Jones’ lawyers. They have denied violating court rules on document disclosure and have asked that Bellis be removed from the case, alleging she has not been impartial. It wasn’t clear if they planned to appeal the default judgment.

The ruling has the same outcome as a jury determining the case in favor of the families. A jury will now determine the damages.

Twenty first-graders and six educators were killed in the December 2012 shooting. The gunman, 20-year-old Adam Lanza, killed his mother at their Newtown home before the shooting, and killed himself at the school as police arrived, officials said.

The shooting was portrayed on Jones’ Infowars show as a hoax involving actors aimed at increasing gun control. Jones has since acknowledged the school shooting did occur.

Families of the victims said they have been subjected to harassment and death threats from Jones’ followers because of the hoax conspiracy pushed on Infowars. They sued Jones and his companies for defamation and infliction of emotional distress. The hearing on damages before a jury is expected to be held next year.

“What’s clear from Judge Bellis’ ruling is that Alex Jones and the Jones defendants have engaged in a long, continuous course of misconduct in this case designed to prevent the plaintiffs from getting evidence about Mr. Jones’ business and about his motives for publishing lies about them and their families,” said Christopher Mattei, a lawyer for relatives of eight of the victims who sued Jones in Connecticut.

Messages were left for parents of some of the children killed in the shooting.

A Texas judge recently issued similar rulings against Jones in three defamation lawsuits brought by Sandy Hook families in that state, finding Jones liable for damages after defaulting him and his companies for not turning over documents. Hearings on damages also were ordered.

In one of the lawsuits, a Texas judge in 2019 ordered Jones to pay $100,000 in legal fees and refused to dismiss the suit. And a jury in Wisconsin awarded $450,000 to one of the parents in his lawsuit against conspiracy theorist writers, not including Jones, who claimed the massacre never happened.

In the three Connecticut lawsuits, Jones previously was sanctioned for violating numerous orders to turn over documents and for an angry outburst on his web show against Mattei. A judge barred Jones from filing a motion to the dismiss the case — a ruling that was upheld after being appealed all the way to the U.S. Supreme Court, which declined to hear Jones’ appeal in April.