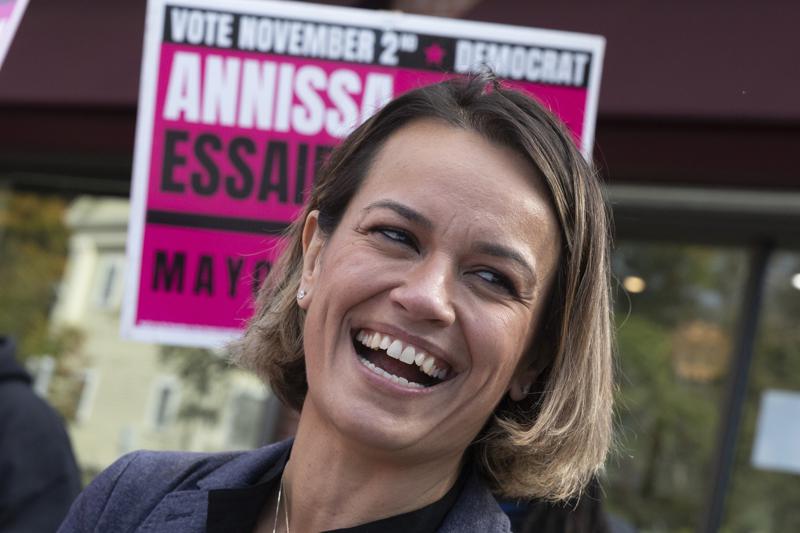 FILE — Boston mayoral candidate Annissa Essaibi George campaigns in the Mattapan neighborhood of Boston, on Saturday, Oct. 23, 2021. Essaibi George, who describes herself as Polish-Arab American, has found herself challenged on the campaign trail about her decision to identify as a person of color. (AP Photo/Michael Dwyer, File)

The question has been bubbling beneath the surface of Boston’s historic mayor’s race, where one of the two candidates, Annissa Essaibi George, has found herself challenged on the campaign trail about her decision to identify as one.

On Tuesday, Essaibi George faces off against fellow Boston City Councilor and Democrat Michelle Wu, a daughter of Taiwanese immigrants. Whoever wins will be the first woman and first person of color elected to the city’s top political office.

Essaibi George, who describes herself as Polish-Arab American, acknowledges she hasn’t always identified as a person of color — in part because Arab Americans don’t fit neatly into the boxes Americans are typically asked to check off on official forms, including on the U.S. Census.

“We have found ourselves in this weird position where there isn’t a place for us to identify as Arab," Essaibi George said in a recent interview on GBH News. “It’s unfortunate that Arabs don’t have that proverbial box to check and it is important for the Arab community to be counted, to be seen, to be heard and to be recognized."

She has identified as a person of color during her years in elected office, Essaibi George said.

Essaibi George has frequently talked about the obstacles faced by her father, a Muslim immigrant from Tunisia, and the challenges he believed she would also face as his daughter. Her mother, a Catholic, immigrated from Poland.

In a city like Boston with its long history of electing white men, particularly of Irish and Italian descent, a girl with an Arab name could never be successful in politics, her father warned, with no chance of becoming mayor.

But the 47-year-old Essaibi George, a lifelong Boston resident and former public school teacher, went on to win an at-large seat on the Boston City Council in 2015 and came in second in a September preliminary election, setting up the head-to-head match with Wu, who won the preliminary.

Although she identifies as a person of color, Essaibi George acknowledges her physical presence — including a heavy Boston accent — allows her a certain amount of privilege as “a woman who can maneuver in different rooms in different spaces."

She has also said that while her father’s family came from North Africa, she doesn’t consider herself African American, a term meant to refer to Black people.

The question of whether Arab Americans should identify as people of color extends to the Arab American community itself.

Nuha E. Muntasser, who describes herself as an Muslim Arab American or Muslim Libyan American, said she cringes whenever she has to check the box for “white” instead of being given the option of identifying as North African or Middle Eastern.

“I do not identify as white and it’s frustrating when I have to identify as that,” she said.

The choice is all the more discouraging because many Arab Americans don’t share the same experience as white Americans, she said. That sense of otherness can be even more pronounced among Arab or Muslim American women who wear the hijab, she said.

“People like me, we have to prove our Americanness,” said the 26-year-old, who lives in Sudbury, 45 miles west of Boston, and serves on the town’s Diversity, Equity and Inclusion Committee.

Muntasser also hesitates to call herself a person of color. “Because I understand the difference of what Black women experience in this country, I am not comfortable with saying I am a person of color,” she said.

The lack of a box to check for Arab Americans can also limit economic opportunities, said former Cambridge City Councilor Nadeem Mazen, an Arab American and an American Muslim.

“When you’re a minority- or veteran- or women-owned business, that’s important,” Mazen said. “People make a lot of assumptions about which boxes you can check.”

Mazen, who lives in Cambridge, said he doesn’t look like a Black person but also isn’t seen as white, occupying what he described as a kind of moving window.

“I don’t go around saying I’m a person of color or not a person of color, but I know someone like me faces a lot more discrimination than your average upper class white Cambridge resident,” Mazen said.

A pivotal moment in the trajectory of the lives of many Arab Americans came with the Sept. 11 attacks, with many still feeling singled out and under suspicion 20 years later.

A poll by The Associated Press-NORC Center for Public Affairs Research conducted ahead of this year’s 9/11 anniversary found that 53% of Americans have unfavorable views toward Islam, compared with 42% who have favorable ones.

Mohammed Missouri, 38, executive director of Massachusetts-based Jetpac, a nonprofit seeking to build political power among American Muslims, said earlier generations of Arab Americans tended to focus on assimilation rather than leaning into their identity.

“With younger people in the Arab American community, you’re seeing people whose goal is to build actual power and not just power for themselves but for the community at large,” said Missouri, an Arab American. “Younger Arab Americans are very proud of their heritage and see that as integral to their identity as Americans.”

Missouri also said that while he’s forced to check “white” on Census forms — defined as “all individuals who identify with one or more nationalities or ethnic groups originating in Europe, the Middle East or North Africa” — he doesn’t consider himself white.

Whether Arab Americans fall into the broader category as persons of color is still a matter of debate within the community he said, adding that some “white-passing Arab Americans” prefer to identify as white.

“It’s going to be a fluid conversation we’re going to keep having,” he said.

Walsh was replaced on an acting basis by Kim Janey, sworn in March 24 as Boston’s first female and first Black mayor.