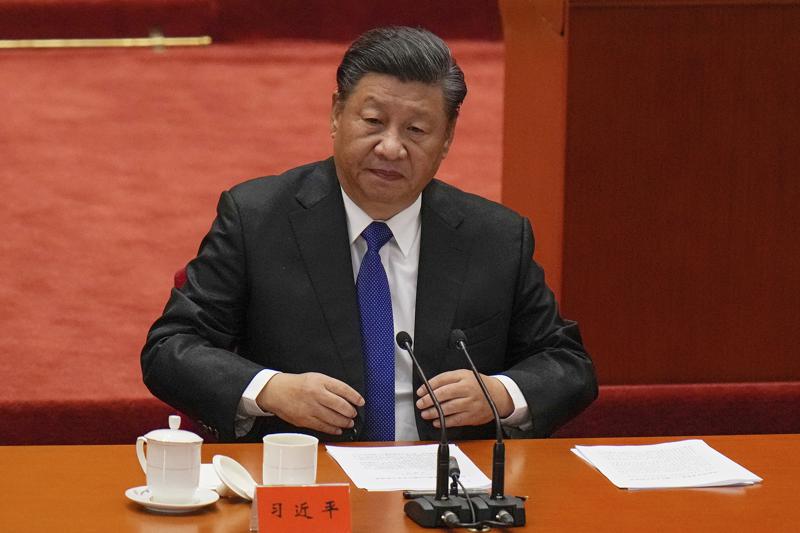 Chinese President Xi Jinping looks as he arrives at an event commemorating the 110th anniversary of Xinhai Revolution at the Great Hall of the People in Beijing, Saturday, Oct. 9, 2021. Xi said on Saturday reunification with Taiwan must happen and will happen peacefully, despite a ratcheting-up of China’s threats to attack the island. (AP Photo/Andy Wong)

TAIPEI, Taiwan (AP) — Chinese leader Xi Jinping said on Saturday that a “peaceful” reunification of Taiwan with China’s mainland was in Beijing’s interests, despite ratcheted up military threats against the self-governing island.

Xi spoke at an official celebration in Beijing’s Great Hall of the People that focused largely on the need for the ruling Communist Party to continue to lead China as the country rises in power and influence.

“Reunification of the nation must be realized, and will definitely be realized,” Xi vowed before an audience of politicians, military personnel and others gathered in the hulking chamber that serves as the seat of China’s ceremonial legislature.

“Reunification through a peaceful manner is the most in line with the overall interest of the Chinese nation, including Taiwan compatriots," the leader added.

Taiwan and China split in 1949 amid a civil war, with the then-ruling Nationalist Party fleeing to the island as Mao Zedong’s Communists swept to power on the mainland.

Saturday’s ceremony in Beijing was in honor of the 110th anniversary of the Chinese revolution that led to the overthrow of the Qing emperors and the establishment of the Republic of China under Sun Yat-sen. Taiwan celebrates Oct. 10 as National Day and Xi’s address touched on common aspirations for a unified future, despite the stark differences between China’s authoritarian one-party system and Taiwan’s vibrant multi-party democracy.

Taiwan’s National Day celebrations this year will feature a rare display of military equipment, including missiles and a performance by fighter jets to be held Sunday in front of the Presidential Office Building in the center of the capital, Taipei.

That marks the first inclusion of military hardware in Taipei’s official celebrations in years, and the first since Taiwanese President Tsai Ing-wen took office in 2016.

Local media coverage of rehearsals for the celebration showed large missile launch vehicles driving on Taipei’s streets, although the missiles themselves were not directly visible.

In the past, the Taiwanese government has kept its missile capabilities out of the public eye to avoid appearing provocative, said Kuo Yu-jen, a defense studies expert at the Institute for National Policy Research in Taiwan.

Kuo added that Taipei feels it “must demonstrate that Taiwan has the ability to deter China’s threat” as Beijing becomes “overly assertive.”

In years past, the national day celebration has featured choreographed performances by motorcycle-riding military police and overflights by the island’s air force. However, missiles were not part of that display.

“I think this is to raise Taiwan’s people’s morale,” said Fan Shih-ping, a professor of political science at National Taiwan Normal University.

Taiwan’s leader Tsai has placed a higher premium on national defense than her predecessor from the more China-friendly Nationalist Party, launching a revitalization of the island’s shipbuilding industry and commissioning a program to build submarines domestically. She has also instituted reforms in the military, including improving benefits for military personnel and even increasing the quality of food served in the messes.

Taiwanese Defense Minister Chiu Kuo-cheng told legislators Wednesday that the situation with China “is the most severe in the 40 years since I’ve enlisted.” Chiu later told reporters that he believed China would have “comprehensive” capabilities to invade Taiwan by 2025.

Since the split, Taiwan has been self-ruled, but its sovereignty is denied by Beijing, which has refused to renounce the option of using force to bring the island under its control. Beijing has also sought to isolate Taiwan internationally by barring it from the United Nations and other international organizations and opposing official contacts between its government and nations that recognize China, especially the United States, which is legally bound to consider threats against Taipei a matter of “grave concern."

U.S. and Japanese officials have warned that China’s growing capabilities pose a rising threat to Taiwan’s security and that of the region.

“The Taiwan question is purely China’s internal affair, which tolerates no external interference," Xi said on Saturday. “No one should underestimate the Chinese people’s strong determination, will and capability to safeguard national sovereignty and territorial integrity."