The Developmental Psychology of Identity

(for anarchists and others who are dealing with Identity debates) 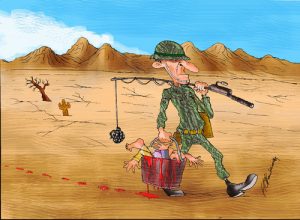 One of the standard theories of developmental psychology is Erik Erikson’s psychosocial stages of development. The theory consists of 8 sequential stages of development, each with specific existential crises preoccupying an individual’s overall goals at different points in their life. While the sequential aspect of Erikson’s theory and the age boundaries defined by each crises have been criticized, it is overall supported to the extent that it has been scrutinized. Accepting the criticisms, I will simply list the stages and their associated crises that are described as a dichotomy:

Basic trust vs. mistrust: Can I trust the world?
Autonomy vs. shame and doubt: Is it okay to be me?
Initiative vs. guilt: Is it okay for me to do, move, and act?
Industry vs. inferiority: Can I make it in the world of people and things?
Identity vs. role confusion: Who am I? Who can I be?
Intimacy vs. isolation: Can I love?
Generativity vs. stagnation: Can I make my life count?
Ego integrity vs. despair: Is it okay to have been me?

Right in the middle of Erikson’s list is the crisis of Identity. For Erikson, the crucial time-frame for resolving this crises is between the ages of 13 and 19 years old …adolescence. His theory is that if someone successfully resolves this crisis, they form a solid concept of who they are and what they should expect from themselves. If they are unable to resolve this crisis, it will persist throughout the rest of their lives and interrupt the later stages of their development. What I find apt about this theory is the correlation between identity crisis and adolescence, and the consequences of unresolved identity issues. This is what a typical interpretation of this stage looks like (from wikipedia):

The adolescent is newly concerned with how they appear to others. Superego identity is the accrued confidence that the outer sameness and continuity prepared in the future are matched by the sameness and continuity of one’s meaning for oneself, as evidenced in the promise of a career. The ability to settle on a school or occupational identity is pleasant. In later stages of Adolescence, the child develops a sense of sexual identity. As they make the transition from childhood to adulthood, adolescents ponder the roles they will play in the adult world. Initially, they are apt to experience some role confusion—mixed ideas and feelings about the specific ways in which they will fit into society—and may experiment with a variety of behaviors and activities (e.g. tinkering with cars, baby-sitting for neighbors, affiliating with certain political or religious groups). Eventually, Erikson proposed, most adolescents achieve a sense of identity regarding who they are and where their lives are headed.

Erikson is credited with coining the term “Identity Crisis.” Each stage that came before and that follows has its own ‘crisis’, but even more so now, for this marks the transition from childhood to adulthood. This passage is necessary because “Throughout infancy and childhood, a person forms many identifications. But the need for identity in youth is not met by these.” This turning point in human development seems to be the reconciliation between ‘the person one has come to be’ and ‘the person society expects one to become’. This emerging sense of self will be established by ‘forging’ past experiences with anticipations of the future. In relation to the eight life stages as a whole, the fifth stage corresponds to the crossroads:

What is unique about the stage of Identity is that it is a special sort of synthesis of earlier stages and a special sort of anticipation of later ones. Youth has a certain unique quality in a person’s life; it is a bridge between childhood and adulthood. Youth is a time of radical change—the great body changes accompanying puberty, the ability of the mind to search one’s own intentions and the intentions of others, the suddenly sharpened awareness of the roles society has offered for later life.

Adolescents “are confronted by the need to re-establish boundaries for themselves and to do this in the face of an often potentially hostile world.” This is often challenging since commitments are being asked for before particular identity roles have formed. At this point, one is in a state of ‘identity confusion’, but society normally makes allowances for youth to “find themselves,” and this state is called ‘the moratorium’:

The problem of adolescence is one of role confusion—a reluctance to commit which may haunt a person into his mature years. Given the right conditions—and Erikson believes these are essentially having enough space and time, a psychosocial moratorium, when a person can freely experiment and explore—what may emerge is a firm sense of identity, an emotional and deep awareness of who he or she is.

As in other stages, bio-psycho-social forces are at work. No matter how one has been raised, one’s personal ideologies are now chosen for oneself. Often, this leads to conflict with adults over religious and political orientations. Another area where teenagers are deciding for themselves is their career choice, and often parents want to have a decisive say in that role. If society is too insistent, the teenager will acquiesce to internal wishes, effectively forcing him or her to ‘foreclose’ on experimentation and, therefore, true self-discovery. Once someone settles on a worldview and vocation, will he or she be able to integrate this aspect of self-definition into a diverse society? According to Erikson, when an adolescent has balanced both perspectives of “What have I got?” and “What am I going to do with it?” he or she has established their identity:

Dependent on this stage is the ego quality of fidelity—the ability to sustain loyalties freely pledged in spite of the inevitable contradictions and confusions of value systems.

Given that the next stage (Intimacy) is often characterized by marriage, many are tempted to cap off the fifth stage at 20 years of age. However, these age ranges are actually quite fluid, especially for the achievement of identity, since it may take many years to become grounded, to identify the object of one’s fidelity, to feel that one has “come of age.” In the biographies Young Man Luther and Gandhi’s Truth, Erikson determined that their crises ended at ages 25 and 30, respectively:

Erikson does note that the time of Identity crisis for persons of genius is frequently prolonged. He further notes that in our industrial society, identity formation tends to be long, because it takes us so long to gain the skills needed for adulthood’s tasks in our technological world. So… we do not have an exact time span in which to find ourselves. It doesn’t happen automatically at eighteen or at twenty-one. A very approximate rule of thumb for our society would put the end somewhere in one’s twenties.

Some of this will likely make an anarchist want to vomit, but for all of its repulsiveness, there are some important insights into the questions of identity that anarchists have been dealing with as of late. According to survey results that were released in 2010 (http://pimpmygarden.org/anarchistsurvey.com/results/#Q3), most anarchists are either adolescents or young adults. According to Erikson’s theory, the issue of identity should be the primary concern in their lives or the concern which the current crisis of their life is contingent upon resolving. But there is more to this issue that pertains specifically to anarchists. We live in a world where adolescence is prime time for being manipulated by social structures (for some excellent insight, watch Merchants of Cool: http://www.pbs.org/wgbh/pages/frontline/shows/cool/view/ ). Not only is it big money, it is also big politics. Adolescents are targeted specifically because of the loyalties they’re likely to form depending on how they resolve their identity crisis. Every authoritarian wants a piece of this action and it there is hardly an outside to the competition of those authoritarians. Anarchists (and counter-cultures) send a message that sympathises with adolescents struggling with their identities in a world that wants to control them at every turn. For these reasons, it is no surprise that identity is such a hot topic.

Developmental psychology can be instructive for anarchists in comprehending the importance of identity issues, but it can also help anarchists resolve them. The failure of what is sometimes called Identity Politics is that instead of comprehending and offering resolutions, it elaborates on the matrix of identities offered by the very institutions anarchists are in revolt against. It takes the sociological data and uses it for comparisons of privileges, quantities of those effected by one aspect of identity or another, and offers a moral politics meant to establish the correct decision-makers. What psychology could offer instead is a perspective that recognizes the social and psychological consequences of identity, but also a way to consider what it can mean to identify as an anarchist. As individuals in revolt, it’s nice to know that we are each treated differently by the institutions we oppose; but, leaving it there is only useful for asking those institutions to change the way they sort us out and treat us based on those very same identities. That is not liberation, it is an improvement that those institutions could make to better control us. As anarchists, our loyalties are different, our lives are not the lives these institutions want us to live, our liberty is not the liberty offered by voting for representatives and choosing the products we consume but do not have a role in producing. These identities are only so many buttons for authoritarians to push according to where they want us and how they want us.

Anarchist identity doesn’t need to be hegemonic. It doesn’t need to create new idols that provide an easily digestible picture of the Good. It doesn’t need to be filled with prescriptive roles like organizer, activist, street fighter, or worker. There is a deeper and richer life outside of and against such authoritarianism. One in which you become the creator of your own identity, where you decide your own loyalties and your own roles. A life where your own liberties, desires, associations, and satisfactions belong to you or something else that is more important to you than this society (if something like green anarchism is your angle). At the very least, a critique of the identities that authoritarian institutions want you do adopt can inform your choices and empower you to recognize those identities for what they are: the hooks at the end of authority’s fishing poles, baited with status and waiting to reel you in.

2 thoughts on “The Developmental Psychology of Identity”