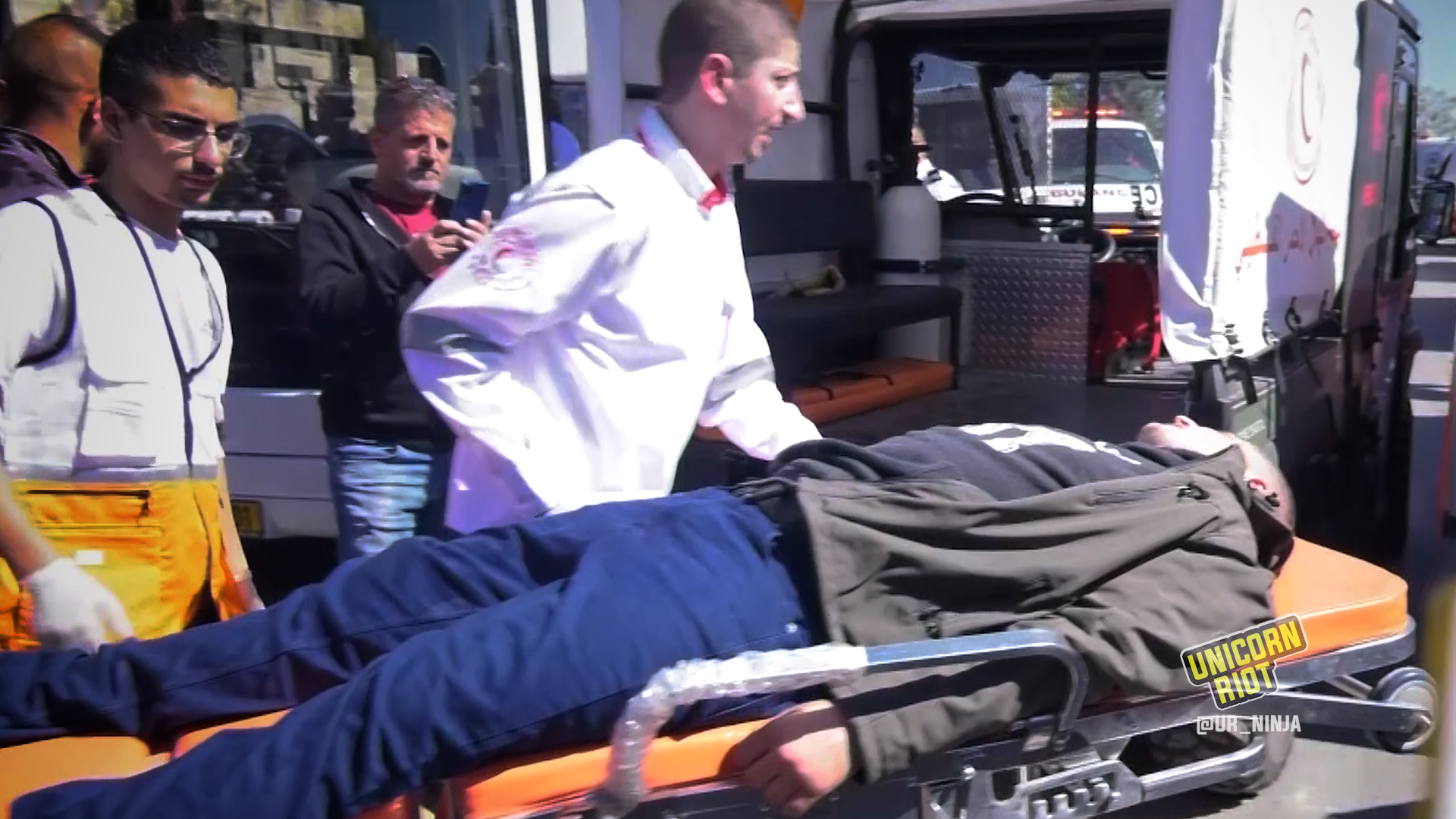 Old City, Occupied East Jerusalem, Palestine – At least 153 people were hospitalized Friday after Israeli police stormed the Al-Aqsa Mosque in Jerusalem. As tensions are rising, these were the first confrontations at Temple Mount since the start of Ramadan on April 2, 2022. The Palestinian Prisoners’ Club reported that 400 people were detained.

The Palestinian Red Crescent said that 153 wounded people were hospitalized and “dozens” were treated on site. Israeli police announced that at least three officers were wounded in the clashes, most of which stopped at noon on Friday.

Muhammad Abdo, a paramedic at Al Aqsa Mosque, told Unicorn Riot that Israeli forces shot a guard at the mosque in the eye with a rubber bullet and said that of the hundreds wounded, which included youth and elderly, many of them suffered “critical injuries.”

“There are very critical injuries, for elderly people, they are the first injuries we received. And there are also injuries to young people who were in Al-Qibli Mosque in Al-Ain, but we were not able to treat them and get them out, so the ambulance will have to take them out. There is a guard in Al-Aqsa Mosque who was shot with a rubber bullet in the eye. The injury looked really bad and he was referred to the eye hospital.”

Friday morning’s clashes came during a time of severe tension boiling for three weeks, with deadly violence in Israel and the occupied West Bank, coinciding with the Jewish and Christian Passover and Ramadan.

Al Aqsa Mosque is located atop a hill in the Old City of Occupied East Jerusalem in the Temple Mount or Haram esh-Sharif (Ar: الحرم الشريف). The Temple Mount also is considered the most revered location in Judaism. Over the years, tensions and clashes between the Israeli police and Palestinians around Temple Mount have been constant.

An axis of the Israeli-Palestinian conflict, Temple Mount houses significant religious holy sites for Judaism, Islam, and Christianity, including the Dome of the Rock, Al Aqsa Mosque, and the Western Wall. It is considered the most revered site in Judaism, and the third-most revered site in Sunni Islam.

The Old City of East Jerusalem has been occupied by Israel since 1967, although Muslims have historically managed the site since Saladin captured Jerusalem in 1187. Currently the site is managed by the Jerusalem Waqf Council, the latest iteration of a centuries-long series of religious trusts, funded by the neighboring Kingdom of Jordan. The Waqf’s photographer, Rami Khatib, was seriously injured by Israeli police on Friday and removed on a stretcher.

The Temple Mount clashes are the first since the start of this year’s Ramadan, a time when Muslims gather at the contested site.

During the month of Ramadan last year (2021), night demonstrations in Jerusalem and clashes in the Al-Aqsa courtyard later turned into an 11-day war between the Islamic Resistance Movement (Hamas), which controls the Gaza Strip, and Israel.

“The coincidence of the Jewish Passover, the month of Ramadan and the Christian Easter symbolizes what we have in common. We must not allow anyone to turn these sacred occasions into a platform for hatred, incitement and violence.”

The United Nations Special Envoy to the Middle East, Tor Veniseland, called on “officials on both sides to de-escalate the situation and prevent new provocations from radical circles.” There are long-standing concerns that Israeli hardliners and some American Christians aim to destroy the Muslim sites and rebuild a temple there, which would risk a larger religious conflict across the region.