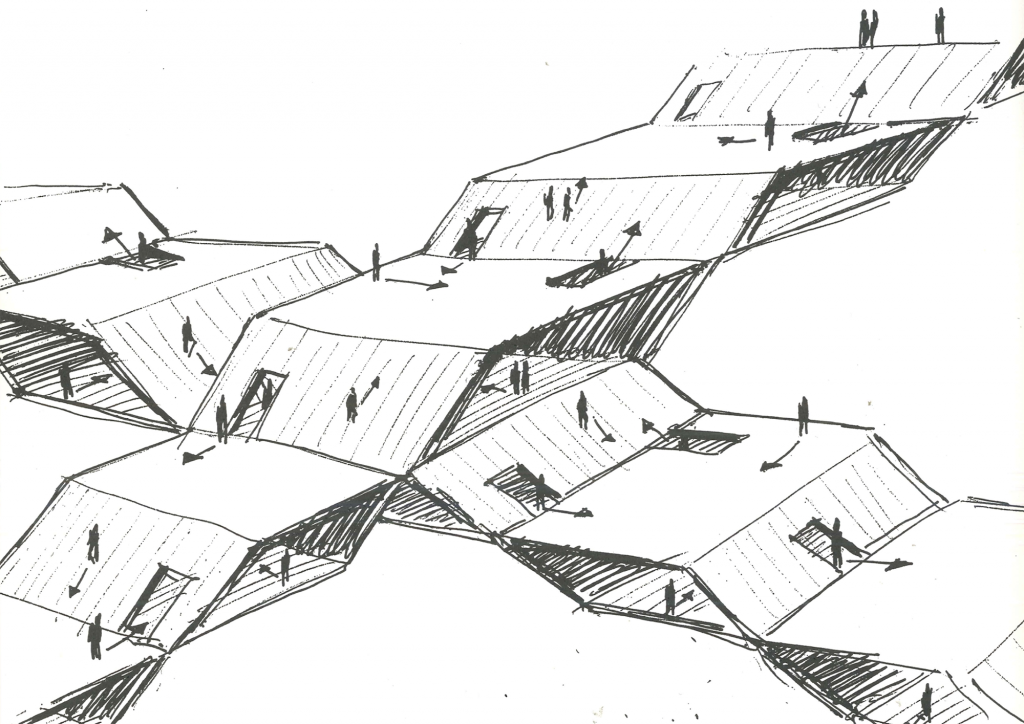 Along the Diagonal Line

Recently I’ve been thinking a lot about diagonal lines and processes of diagonalization. Inherently formal and spatial, if not also graphical, the diagonal or oblique line has played any number of important roles: from the diagonal of the unit square (which nearly destroyed Pythagoreanism and, later, played an important role in Plato’s Meno), to the modern intervention of Georg Cantor’s “diagonal argument” (where in 1891 he demonstrated that the real numbers are uncountable), to the structuralism of A.J. Greimas and Jacques Lacan, to Gilles Deleuze and Félix Guattari’s postmodern “machine,” defined as a diagonal that cuts through an assemblage. The diagonal is a dynamic force that grants access to several important domains, namely relation, contradiction, and the irrational.

The diagonal line is a ubiquitous technology, used in philosophy, mathematics, physics, architecture, art, and many other fields. Two significant technologies of visuality, the camera obscura and vanishing-point perspective, both work along the diagonal, where oblique lines figure as a way to deal with depth, rendering it for a flat surface. As a compositional element in painting, drawing, and sculpture, the diagonal is prized for its sense of motion and dynamism. In cinema, diagonal eye-line matches help to establish spatial continuity by linking shots together. The diagonal can cut; it can push you off balance. The diagonal can link; it can point and find the exit.

Sara Ahmed has used "oblique or diagonal lines" to characterize queerness, and indeed the diagonal — whether alone or via synonyms like the oblique, the slanted or askew, the non-orthogonal — has come to mean differences and deviations of all kinds. Some have found inspiration in Lucretius, who popularized a key concept in materialist philosophy, the clinamen or swerve, a diagonal deviation experienced by atoms falling downward through the void. For followers of Lucretius, the diagonal is the origin of change, growth, perhaps even human freedom. “An atom is deviated,” wrote Alain Badiou, and “the world can come into being.” A whole new spark of life ignites through the deviation of the diagonal line.

Perhaps this is why the diagonal has long figured prominently in esoteric and mystical practices. Triangles, pyramids, and pentagons — symmetrical on one axis if not on another — these shapes seem to awaken forces of spiritual insight if not also the occult, so that a triangle might represent the Christian trinity, or an eye on a pyramid might indicate a vast worldwide conspiracy. Paul Virilio once wrote of a "cryptic energy…the energy of everything that hides itself" found through inclined or oblique structures.

Diagonals can also establish hierarchies and order things into sequences. In operating systems like Unix and DOS, a slash is used to designate parent-child relationships in filename paths, or, more loosely, to designate "inside," "downward," or "linked to." As a non-alphabetical character, the slash often falls under the radar, filling syntactical and infrastructural roles more commonly than semantic ones. Students of Latin or Greek will often draw the letter x in their notebooks as a marker of chiasmus, two criss-crossed diagonals, named after the Greek letter χ [chi]. And across physics, engineering, and architecture, the diagonal proves itself to be a useful structure indeed, from pitched rooflines (which use the diagonal to add a lateral vector to the vertical force of gravity), to the truss (which abstracts a material’s tension and compression into vertical, horizontal, and diagonal lines), to the lines of a sailing vessel (which combine a wing in the air and a knife in the water to plot a course diagonal to the wind).

One of the most interesting leads I’ve found so far is the work of architects Paul Virilio and Claude Parent, who in 1963 formed the influential "Architecture Principle" group, publishing a series of nine booklets in 1966 on the diagonal, or what they called "the oblique function."

I’ll try to post more about this in the future, including inquiries into the following:

— the diagonals of Greimas’s semiotic square

— Sara Oppenheimer’s use of the isovist

Send me your best diagonal references!