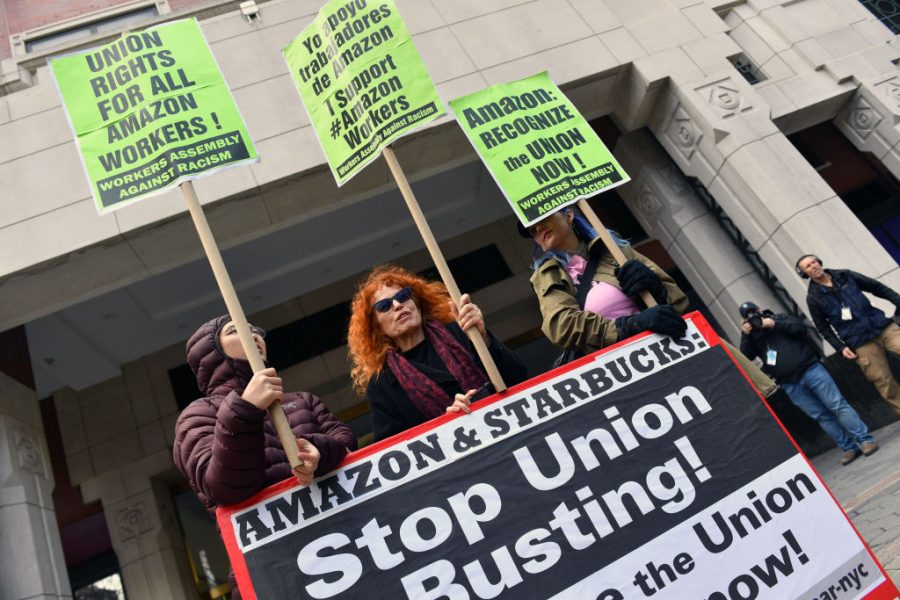 A Democratic consulting firm that works for some of the country’s largest unions was exposed for aiding Amazon’s attempt to crush the Staten Island union drive. Democrats’ consulting class is profiting off both corporate union busters and the labor movement.

A recent union drive at an Amazon warehouse on Staten Island didn’t just deliver the first labor victory anywhere in the online retailer’s US operations when workers voted to unionize there. The bitter fight over the unionization effort has also provided a rare glimpse into how Democrats’ consulting class simultaneously advises — and profits off — purportedly pro-union Democratic politicians, corporate union busters, and the labor movement itself.

The prominent Democratic consulting firm Global Strategy Group (GSG) was recently exposed for helping spearhead Amazon’s attempt to crush the Staten Island union drive. It turns out that the firm — which reaps millions of dollars each election cycle conducting polling, research, and public relations for candidates and liberal organizations — has also long done work for some of the country’s largest unions.

GSG originally sought to defend its work for Amazon, claiming in a since-deleted statement that a report from CNBC “incorrectly attributes anti-union work to GSG that was done by others.” On Monday, the firm issued a half-hearted apology, writing: “While there have been factual inaccuracies in recent reports about our work for Amazon, being involved in any way was a mistake. We are deeply sorry, and we have resigned that work.”

When approached by us, two of the unions that previously contracted with GSG — the American Federation of Teachers (AFT) and a New York chapter of the Service Employees International Union (SEIU) — said that they will no longer employ the firm.

However, five unions and several big-name Democratic candidates that have employed the firm in recent years did not respond to a request for comment as to whether they would sever ties with the company.

The episode highlights a central conflict at the heart of today’s Democratic Party, one with real implications for organized labor: Democrats present themselves as the party of organized labor, while also relying on campaign contributions from major corporations. Similarly, many of the consultants who work for labor unions or to elect Democrats spend as much or more of their time working on behalf of corporate interests that pay far better, so they have little real loyalty to Democrats’ working-class base.

“Democratic firms are particularly valuable to corporate America because they understand how institutions and individuals within the Democratic Party operate,” Jeff Hauser, executive director of the Revolving Door Project, an organization that scrutinizes the personnel who move between corporations and government, told us:

Amazon benefits from having strong relations with Democrats, especially at a time when they are at odds with the labor movement. So it’s particularly important for leadership in the Democratic Party to demonstrate solidarity with Amazon workers by boycotting firms that fight against workers and in favor of union-busting.

“Working for Working People Is Good for Business”

GSG, a New York City–based public relations and research firm founded in 1995, advertises its deep ties with the Democratic Party. “GSG led polling for dozens of winning campaigns and political organizations in 2018 and 2020 to secure today’s Democratic majority in the US House of Representatives and US Senate,” notes the firm’s website. “In fact, our political team has polled in more races than any other firm.”

In the past two election cycles, GSG clients included the Democratic Senatorial Campaign Committee and Democratic Congressional Campaign Committee, the party’s official committees to elect senators and representatives, as well as those committees’ allied super PACs, Senate Majority PAC and House Majority PAC. The firm says it served as “a polling partner” in 2020 for Priorities USA, an outside group backing President Joe Biden that was funded in part by large union donations.

The firm has also worked on the campaigns of Cheri Beasley, who is running for Senate in North Carolina; Representative David Cicilline (D-RI); Representative Val Demings (D-FL), who is challenging Marco Rubio for his Senate seat in Florida; Senator Ed Markey (D-MA); and Representative Joe Morelle (D-NY).

None of those committees, lawmakers, or candidates returned requests for comment from us about whether the recent revelations about GSG’s work on the Amazon union campaign would impact their relationship with the firm.

In addition to its Democratic clients, the firm has also worked for a number of labor unions in recent years — including the National Education Association, the International Brotherhood of Carpenters New England Regional Council of Carpenters, the Associated Actors and Artistes of America, the International Brotherhood of Electrical Workers Local 98 in Philadelphia, the SEIU Local 775 in Washington State, and the ​​American Federation of School Administrators Local 1 in New York, according to Department of Labor records and federal campaign finance reports.

We contacted all of those unions to ask whether GSG’s work with Amazon would affect their relationship with the firm going forward, and none responded.

Two unions that were listed on GSG’s website as clients last fall, but have not worked with GSG for several years, said they would not work with the firm in the future.

“We are glad that GSG has written an apology, and is taking some accountability in the aftermath of the disclosure that they assisted Amazon,” AFT president Randi Weingarten told us:

There are many consultants who have consistently supported the rights of those who work hard for a living — people like teachers, bus drivers, nurses, and Amazon workers — to have a voice on the job. We will work with those folks who didn’t have to be reminded that working for working people is good for business.

Meanwhile, a spokesperson for the SEIU 1199 in New York told us the union would not work with GSG moving forward. “The union has not used them since 2016 and probably won’t again,” the spokesperson said, adding, “We applaud Amazon workers for their historic victory and call on Amazon to respect their vote and negotiate a fair contract without delay.”

The Nevada Democratic Party, which was taken over by candidates backed by the local Democratic Socialists of America chapter last year, told More Perfect Union it won’t work with GSG again, either.

“We Regret Being Involved”

Soon after GSG’s work for Amazon was first reported, the Amazon Labor Union that had organized the Staten Island workers filed a complaint with the National Labor Relations Board (NLRB) against the firm for violating federal labor law.

The complaint alleges that the website and other materials that GSG reportedly set up for Amazon contained lies about unions in violation of federal labor law, according to the Amazon Labor Union’s lawyer, Seth Goldstein. (GSG denies that it produced these materials, but CNBC reported that it “has documentation to back up its reporting, including descriptions of the firm’s work with Amazon.)

On Monday, GSG apologized for consulting with Amazon on its union-busting efforts, and suggested that it will not aid the company in future efforts to block its employees from unionizing. “While there were inaccuracies in the description of our work, we regret being involved in any way and have resigned this work with Amazon,” Tanya Meck, a partner and managing director at GSG, told the City.

But GSG has represented many other powerful corporate clients. The firm worked on behalf of both Uber and Lyft in their attempts to block legislation classifying their drivers as employees rather than as independent contractors.

GSG has also worked for Tyson Foods, which came under fire last year for not taking adequate precautions to protect plant workers from COVID-19. Other clients include Apollo Global Management, the hedge fund of billionaire Donald Trump donor Marc Rowan, and Comcast, which faced its own union-busting allegations in 2020.

The Joe Biden administration has its own close ties to GSG. For example, Jen Psaki, Biden’s press secretary, was a senior vice president and managing director for GSG from 2011 to 2012.

Biden pledged to be the most “pro-union” president in American history and recently spoke out in favor of Amazon workers who want to unionize, but he has declined to take executive actions that would help workers in union elections, as we previously reported.

Meanwhile, top Biden administration officials have rotated through the revolving door between Amazon and its associated firms and government, as New York Magazine recently reported. The company was also one of the top contributors to his candidate committee in 2020.

Amazon held such meetings at the recently unionized Staten Island warehouse ahead of the union election. GSG helped produce materials for these meetings, according to reporting by CNBC.