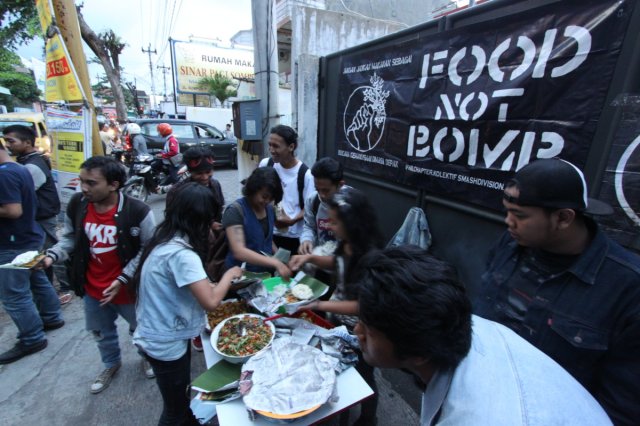 This is the first in a series of articles by Matt Crossin, ‘Critical Notes on Developments in the Anarchist Movement’. New articles in the series will be published in coming weeks.

A strange development has occurred which has led to anarchist theory being increasingly associated with a tactic referred to as ‘building Dual Power’. The advocates of this tactic believe that anarchists – being opposed to bosses and governments – should, as our primary strategy, create parallel, self-managed institutions, such as worker co-operatives, community assemblies, mutual aid groups, and so on. The argument goes that as such organisations proliferate, they will constitute a form of a popular power which not only provides an attractive vision of another world, but leaves the capitalists without workers and the State irrelevant.

Though using the term ‘Dual Power’ to refer to such tactics appears sporadically in the 1990s (in the material of the group Love and Rage, for example), it’s unclear how exactly the association became so widely popularised over the last few years. What is clear is that this conception of Dual Power has nothing in common with the original usage, coined by Lenin, as a means of describing a condition of revolutionary potential.

Dual power was not a strategy to achieve such circumstances (let alone socialism). It described a really existing situation wherein organs of workers’ power (soviets, factory committees, militias), formed through class struggle, could marshall resources and popular legitimacy capable of rivaling, and conceivably surpassing, that of the State. Such conditions placed workers in a position to expropriate the capitalist class and overthrow the State. Later, in the Spanish Revolution, similar committees and collectives, with the same revolutionary potential, emerged amidst the anti-fascist insurrection, and then sat uneasily alongside a gradually reconstituted Republican government. In both cases two rival claims to power co-existed: one bourgeois, one proletarian. In neither case does dual power refer to the employment of a strategy; certainly not one based on starting cooperative workplaces, community gardens, or ‘mutual aid’ groups like Food Not Bombs – whatever the merits of those respective projects.

Real dual power is inherently unstable, given it represents an active threat to the power of governments and capitalists. In both the Russian and Spanish cases, the circumstances of dual power were ended by inevitable confrontations. In Russia the Provisional Government was overthrown in favour of an increasingly authoritarian Bolshevik government (initially legitimised under the banner of ‘all power to the soviets’). In Spain the revolutionary committees, having failed to smash the State beyond repair, or fully socialise production, were subsumed by the Popular Front, and eventually crushed by a liberal-Stalinist coalition within the Republican government they had helped revive.

Far from representing the politics of classical mass-anarchism (sometimes referred to as ‘class struggle’ anarchism), the new advocates of Dual Power as a strategy are, in reality, reviving the old ‘utopian’ tradition of non-confrontational, non-revolutionary socialism. It is, at best, the proto-anarchist politics of Pierre-Joseph Proudhon, rather than the anarchism of Errico Malatesta, Mikhail Bakunin, or the revolutionary anarchist workers’ organisations which developed out of the Federalist wing of the International Workingmen’s Association.

Like Proudhon, and contrary to the revolutionary anarchist view, the proponents of Dual Power argue that we can improve our position under capitalism, and ultimately achieve anarchy, by cobbling together whatever resources we can muster and managing them in an autonomous, cooperative manner. In practice, this would mean the better off among us providing goods and services to those of us who are worse off (a form of service provision often confused with the concept of ‘mutual aid’)1 and cooperative businesses competing with traditional firms on the market.

Historically, this strategy has been a loser, for reasons that were well articulated by anarchists and Marxists alike. As workers, we have barely anything to share amongst ourselves. Meanwhile, the capitalists have everything. They will always be able to out-compete the cooperative sector. The logic of the market will always pressure the worker-owners of those co-ops – that is, of cooperatively managed private property in the form of firms – to worsen their own conditions, lower their own wages, reduce the quality of their products, and raise prices for consumers in order to survive.

Survival, while maintaining the spirit of the cooperative project, is itself a struggle. Driving traditional capitalist firms out of business, appropriating their resources, placing this property under broader social control, and having the State vanish in the process, is a fantasy.

The advocates of Dual Power avoid the whole question of what victory looks like. Even if the Dual Power strategy could achieve a situation of real dual power (as articulated by Lenin), our goal as anarchists is to eliminate capital and the State, not to exist ‘outside of’ or ‘parallel to’ them as a ‘second power’. Clearly, at some point, we would need to expropriate capital, and this would naturally invoke the response of the State, which both depends on and reproduces class society.

Yet counter-power – power within traditional capitalist firms, against the bosses and the government, capable of seizing control over the economic life of society, putting it in service of human need, and forcefully defending this transformation of social relations – is rarely addressed by the champions of Dual Power. Here there is also a fundamental weakness in the Dual Power vision of reform, as it is our structural position within capitalist firms (which require our labour) that allows us to exert leverage over the bosses and the governments which serve them.

Anarchists should keep in mind Peter Kropotkin’s words on this subject, and his warning to workers who refuse to abandon such tactics for revolutionary struggle:

Work for us, poor creature who thinks you can improve your lot by co-operatives without daring to touch at the same time, property, taxation, and the State! – Keep them up and remain their slave!