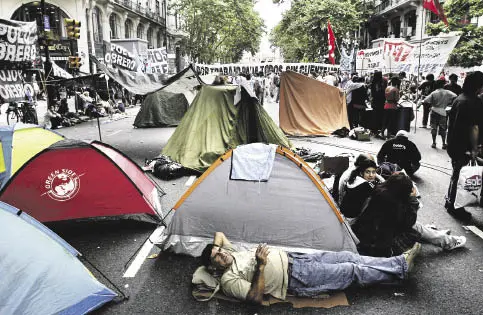 This is the second in a series of articles by Matt Crossin, ‘Critical Notes on Developments in the Anarchist Movement’. Published on 25 July 2022.

It is not uncommon, particularly in North America, to see anarchism defined as an ideology rooted in ‘direct democracy’, consensus decision making, and the maintenance of ‘horizontal’ (i.e., ‘non-hierarchical’) social relations, particularly in autonomous zones or public spaces.

This idea of anarchism is unusual in that it places at the centre of its definition an adherence to very specific forms of procedure and interpersonal behaviour while downplaying the political ends a ‘horizontal’ movement should be trying to establish. From this perspective, reclaiming public space as an opportunity to hold non-hierarchical public assemblies, where we can hammer out decisions by consensus, is, in itself, ‘anarchist’ – whatever the result of such processes.

This has little to do with the classical, mass-anarchist tradition and its politics of revolutionary socialism. It is, instead, an approach which is better described as falling under the banner of ‘neo-anarchism’ (or ‘small-a anarchism’). Neo-anarchism is a modern conception of anarchism largely informed by the feminist and peace movements of the 70s, the environmental movement of the 80s, the alter-globalisation movement of the 90s, and the Argentinian uprising of 2001; which coined the term horizontalidad (‘horizontalism’) to describe the movement’s rejection of representative democracy, the use of general assemblies to coordinate activity, and converting abandoned or bankrupt factories into cooperative businesses.

Take, for instance, the insistence by neo-anarchists on the use of consensus decision making. Though consensus (or ‘unanimity’, as it was typically called) was sometimes a feature of anarchist political organisations, and often seen as an ideal to work towards through comradely discussion, it was never a fundamental component of the anarchist movement. Anarchists have generally agreed that the appropriate form of decision making depends on the circumstances concerned, and frequently endorsed variations of majoritarian voting; particularly in mass organisations based on commonalities other than close-ideological affinity, such as unions. The focus for anarchists has generally not been the form of decision-making, but instead the principles of free association and solidarity. Furthermore, though anarchists have always stressed the right of the minority to be free of the majority’s coercion, it is even more important that the great majority be free of minoritarian rule or sabotage. As Malatesta wrote in his pamphlet Between Peasants: A Dialogue on Anarchy:

everything is done to reach unanimity, and when this is impossible, one would vote and do what the majority wanted, or else put the decision in the hands of a third party who would act as arbitrator, respecting the inviolability of the principles of equality and justice which the society is based on.1

In response to the concern over minoritarian sabotage, he continues by asserting that such a situation would

As for ‘autonomous zones’ and the tactic of reclaiming public spaces (as seen in the Occupy movement) – here we have no connection to anarchism as a revolutionary tradition, and an example of a tactic which has repeatedly shown its inability to extract significant reforms, let alone revolutionise production and destroy the State.

The fundamental limitations of the ‘public occupation’ or ‘autonomous zone’ , and the defeats which have followed from these limitations, have led some former advocates of the strategy to make a notable transition from neo-anarchism to parliamentary politics. Though inexplicable to some outside observers, the change is easily understood when we consider neo-anarchism’s peculiar view of ‘direct democracy’, or ‘horizontally organised spaces’, as the defining characteristic of anarchism, and not a theory of libertarian revolution against the State and capital.

If we accept the idea of anarchism as proposed by the neo-anarchists, there is no fundamental contradiction between anarchism and involvement in parliamentary politics. If the political party is a directly democratic one, composed of social movements, and committed to horizontal interpersonal relations, what difference does it make if the decision made (ideally by consensus) is to campaign for political candidates, or even administer the State?

We have seen this with the so-called ‘Movements of the Squares’ in Europe. Activists who took part in the 15M (or ‘Indignados’) movement in Spain abandoned their dismissal of all politicians (“¡Que no nos representan!” – “They don’t represent us!”) with the formation of Podemos and various other ‘municipalist’ parties.2

A similar trajectory was followed by the anthropologist David Graeber towards the end of his life. Graeber – a figurehead of Occupy Wall Street and, prior to that, a participant in the alter-globalisation movement – apparently saw no contradiction between his professed (neo-)anarchism and his efforts to join the British Labour Party in support of Jeremy Corbyn. In particular, Graeber was enthusiastic about the Labour-affiliated organisation Momentum; an outgrowth of the Corbyn leadership campaign, which he argued constituted a unique attempt to fuse a radical social movement with a traditional parliamentary party.3

More recently we have witnessed the absurdity of a self-proclaimed ‘libertarian socialist’, Gabriel Boric (who touts his association with Chile’s radical student movement), ascending to the presidency in the aftermath of a militant popular uprising.

The damage caused by these supposedly ‘unique’ attempts to translate the ‘horizontalism’ of neo-anarchism into the party-form – which, in reality, hardly differs from the historic approach offered by Marxists as an alternative to anarchism – has been outlined well elsewhere, and there is no need to go over the details here.4
It suffices to say that in each case there was bureaucratisation, accomodation with the necessities of administering the capitalist state (or even just campaigning to administer it), and zero empowerment of workers against the bosses.

The reality is that there is no way to fully ‘prefigure’ anarchy and communism through ‘directly democratic’ spaces of ‘autonomy’. Anarchism requires a specific anarchist movement and anarchist practice. Though we must certainly organise ourselves from the bottom up, with a consistent federalist structure, we can not simply bring about our ideal by ‘living anarchisticly’ or relating to one another as ‘horizontally’ as possible. Similarly, the content of anarchism can not be limited to the structure of our movement – its content of revolutionary class struggle must be maintained. To quote Luigi Fabbri:

If anarchism were simply an individual ethic, to be cultivated within oneself, and at the same time adapted in material life to acts and movements in contradiction with it, we could call ourselves anarchists and belong to the most diverse parties; and so many could be called anarchists who, although they are spiritually and intellectually emancipated, are and remain, on practical grounds, our enemies.But anarchism is something else… proletarian and revolutionary, an active participation in the movement for human emancipation, with principles and goals that are egalitarian and libertarian at the same time. The most important part of its program does not consist solely in the dream, which we want to come true, of a society without bosses and without governments, but above all in the libertarian conception of revolution, of revolution against the state and not through the state…5

The article is also available in Chinese here:
https://zhuanlan.zhihu.com/p/548127105