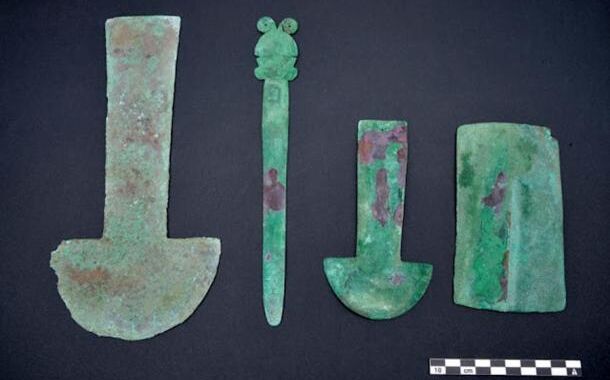 Ancient Peruvian was buried with tools for cranial surgery

Archaeologists recently unearthed an unusual tomb in a temple complex at the Huaca Las Ventanas archaeological site near Lambaeque, in northern Peru. The site belonged to the Sican culture, one of the several complex societies that flourished prior to the rise of the Inca Empire (around 1400 CE) in northern Peru. The tomb reveals that the Sican—like several other Indigenous cultures spanning the length of Peru and about 4,000 years of history—practiced a type of cranial surgery called trepanation.

Trepanation is the delicate art of cutting or drilling a hole in a person’s skull. It sounds brutal, but it can actually help relieve pressure on the brain from inflammation or bleeding, such as might occur after a head injury. Modern surgeons sometimes use a similar procedure, called a craniotomy, to relieve pressure from bleeding under the membrane that surrounds the brain.

Of course, modern craniotomies are guided by CT scans and MRIs. Ancient surgeons just had to go by sight and feel, which makes their success rates pretty remarkable. Archaeologists in Peru have found the remains of about 800 trepanation patients from the last 4,000 years, and the majority of them show signs of bone healing around the edges of the hole—which means they survived serious head trauma and cranial surgery to treat it.

Assuming that the tools belonged to the tomb’s occupant, it tells us that the Sican surgeon buried at Huaca Las Ventanas wasn’t a butcher; he was, as Sican National Museum director Carlos Elera put it in a press statement, “a specialist in cranial trepanations, and his surgical instruments were oriented to everything that was human skull surgery.”

A whole suite of surgical tools wrapped in a bundle were lying alongside the long-dead surgeon; archaeologists found dozens of wooden-handled bronze awls, needles, and knives in a range of sizes. Most of the knives were single-edged blades, but one was clearly special. The semicircular blade, called a tumi, was a staple of both surgery and ritual sacrifice for the Sican, their predecessors the Moche, and later the Inca. Ritual tumis were large and elaborate, but ancient surgeons used a smaller, more utilitarian version for trepanation.

“We are comparing the instruments of a modern surgeon with these objects, to see what similarities they have,” said Elera. One difference is already obvious: The bronze in most of the tools contains a fairly large amount of arsenic, which would probably raise some eyebrows in a modern surgical suite.

On the other hand, the Sican surgeon would probably have recognized the tools used by his colleagues several hundred years earlier and several hundred miles to the south, in the Paracas culture of what’s now southern Peru. Archaeologists have found very similar surgical tools—awls, knives, needles, and tumis—at Paracas sites. But while the Sican surgeon used bronze tools, Paracas surgeons favored razor-sharp obsidian blades. They share that preference with some modern surgeons, who use obsidian scalpels for their sharpness and precision.

Two examples of the surgeon’s work also joined him in his grave; archaeologists found two frontal bones (the bone that makes up the forehead). One belonged to an adult, one belonged to a child, and neither originally belonged to the surgeon (his was still attached to the rest of his skull). Both had been carefully cut using a classic trepanation technique.