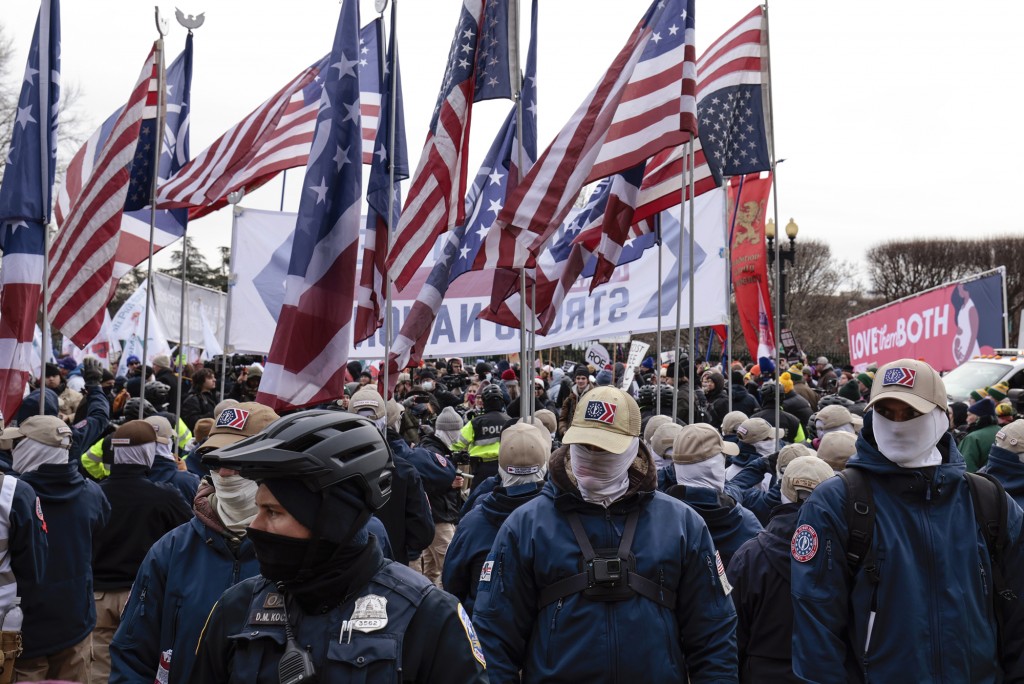 Members of the Patriot Front march with anti-abortion activists during the 49th annual March for Life rally on Jan. 21, 2022, in Washington, D.C.

In 1982, an extremist group calling itself the Army of God kidnapped Dr. Hector Zevallos and his wife. Zevallos was an abortion provider in Edwardsville, Illinois, and his abduction signaled the rise of a new generation of white nationalist extremist groups, many of which made opposition to abortion their top priority.

Zevallos and his wife were eventually released, but the rightist Supreme Court succeeded in overturning Roe v. Wade last month thanks in part to decades of unrelenting violence by the Army of God and other anti-abortion extremists — violence that set the stage for the rise of the white nationalist domestic terror groups that threaten American democracy today. The Army of God was an early precursor to today’s pro-Trump paramilitary organizations.

Over the past four decades, the right-wing campaign against Roe v. Wade has been the most violent protest movement in modern American history. Despite recent complaints by conservatives about acts of violence associated with the George Floyd protests in 2020, no other recent social protest movement comes close to anti-abortion activists’ long record of violence.

Between 1977 and 2021, anti-abortion extremists committed at least 42 clinic bombings, 196 clinic arsons, and 11 murders of doctors and clinic staffers, according to data compiled by the National Abortion Federation.

The political side of the anti-abortion movement has only occasionally and very reluctantly condemned the violence, and instead has taken advantage of the intense media attention that clinic bombings and the murders of doctors have generated for their cause. Anti-abortion leaders have long considered terrorism a useful political tool, keeping up the pressure against legalized abortion while also attracting zealous new recruits. In the process, anti-abortion extremists have helped build a foundation for the pro-Trump extremist groups that are proliferating today.

To skirt the law, anti-abortion extremists have tended to form groups without much structure, making it more difficult for them to be sued by reproductive rights groups or investigated by law enforcement. The Army of God, for example, had such an amorphous framework that abortion rights activists and federal officials found it difficult to determine whether the organization really existed or not, despite investigations by a Justice Department anti-abortion violence task force and the FBI in the 1990s.

After Don Benny Anderson and two other men who had called themselves the Army of God were charged in the Zevallos kidnapping and sent to prison, the group’s name was widely used by other extremists throughout the anti-abortion underground. Yet the Army of God seemed to be nothing more than a nom de guerre, a name invoked by extremists who did not want to claim personal responsibility for major acts of violence. Supreme Court Justice Harry Blackmun, the author of the 1973 Roe v. Wade decision, received a threatening letter from the Army of God in 1984; as a result, security guards were assigned to protect him whenever he appeared in public.

But while the group lacked any apparent organization, there were real people committing real acts of violence in its name. And there were anti-abortion activists who worked hard to expand the Army of God’s reach. In fact, the group’s most potent weapon became a document known as the “Army of God Manual,” an anonymously written how-to guide to anti-abortion violence that circulated widely in the extremist underground. In the days before the internet, the manual was printed out and secretly distributed by hand or mail.

The Justice Department struggled to uncover the truth about the Army of God. In 1994, a federal grand jury in Alexandria, Virginia, investigating anti-abortion violence issued a subpoena to John Burt, a longtime extremist. When officials learned that Burt had a copy of the “Army of God Manual,” they flew back to his home with him to get it. The manual explained that the group’s soldiers did not usually communicate with each other or meet. “That is why the Feds will never stop this Army,” the manual states. “Never.”

Another extremist anti-abortion group that was fluid and shifting was the Lambs of Christ, founded by Norman Weslin, a former Green Beret who became a Catholic priest and was arrested at least 80 times for leading clinic blockades. James Kopp, who murdered the abortion provider Dr. Bernard Slepian in 1998 in Amherst, New York, was affiliated with the Lambs of Christ, but federal investigators were unable to connect any anti-abortion organization to Kopp’s killing of Slepian. Kopp fled to France, and a couple who were anti-abortion activists pleaded guilty to conspiring to help him avoid capture; he was ultimately sentenced to life in prison. Kopp’s nickname in the anti-abortion movement was “Atomic Dog,” a name mentioned in the Army of God manual.

The intentionally loose and informal organizational structure used by anti-abortion extremists has been adopted by pro-Trump white nationalist extremists as well.

The intentionally loose and informal organizational structure used by anti-abortion extremists has been adopted by pro-Trump white nationalist extremists as well. For example, extremist leader Thomas Rousseau was involved with a group called Vanguard America at the violent Unite the Right rally in Charlottesville, Virginia, in 2017. James Fields, who marched with Vanguard America at the rally, was arrested for driving his car into a crowd of counter-protesters, killing Heather Heyer and wounding many others. Vanguard America’s connection to Fields was devastating, despite the group’s denials that he was really a member.

With Vanguard America mired in controversy, Rousseau simply quit the group and created a new, nearly identical one, now known as Patriot Front. Last month, 31 members of Patriot Front, including Rousseau, were arrested when police in Coeur d’Alene, Idaho, stopped a U-Haul truck full of Patriot Front members, all dressed alike and wearing masks to hide their identities. They were on their way to start a riot at a Pride event in downtown Coeur d’Alene, police said. On July 2, about 100 masked members of Patriot Front marched through Boston, carrying metal shields and a banner saying “Reclaim America.” The group was accused of assaulting a Black man during their march. Members of the Patriot Front march with anti-abortion activists during the 49th annual March for Life rally on Jan. 21, 2022, in Washington, D.C.

Today, anti-abortion extremists and white nationalists are forging alliances, and the dividing lines between them are increasingly blurred.

The anti-abortion and white nationalist camps seemed to merge during the January 6 insurrection. Longtime anti-abortion extremist John Brockhoeft livestreamed himself outside the U.S. Capitol during the riot, claiming he was “fighting for our beloved President Donald J. Trump.” In 1988, Brockhoeft was arrested outside an abortion clinic in Pensacola, Florida, after authorities, who had been tipped off by his wife, found explosives in his car. He later admitted to committing a series of arsons and bombings of abortion clinics in Ohio. Brockhoeft served seven years in prison.

Also at the Capitol on January 6 was Jason Storms, now the national director of Operation Save America — the current name for Operation Rescue, once the nation’s largest and most volatile anti-abortion protest organization. He was joined by other members of the group, which reported on its website that Storms and others had “set up the Lord’s beachhead at this immense gathering.”

“We went to DC, meeting other OSA brethren there to engage in worship, prayers of repentance, to preach the Word of God, the Gospel, and to explain to the thousands there why our nation is on the precipice of ruin,” the group’s website says.

White nationalist and anti-abortion extremists have bonded over their shared white Christian nationalism and their fears of white demographic decline. The “great replacement,” a conspiracy theory claiming that the U.S. government is seeking to replace white Americans with nonwhite immigrants, has motivated white nationalists to oppose abortion alongside with their opposition to immigration; some white nationalists only want abortion banned for white women.

Patriot Front members attended the January “March for Life” in Washington, which has long been the largest event of the anti-abortion movement, held annually on the anniversary of the Roe v. Wade decision. They carried banners that read like something straight out of the Third Reich: “Strong families make strong nations.”