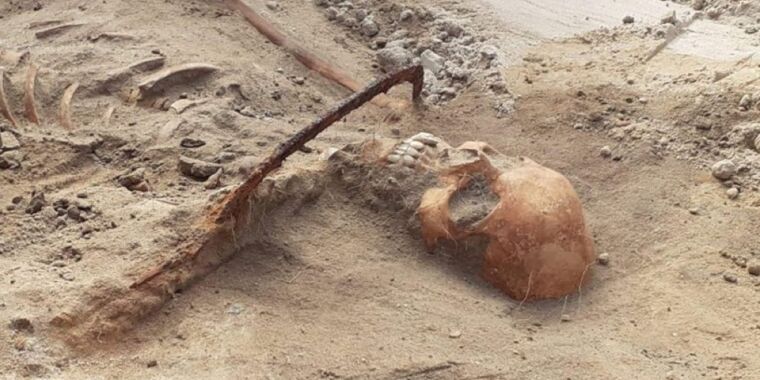 Vampire folklore across cultures is filled with various tips on how to keep a recently deceased person from rising from the grave as an undead fiend who preys on the living. Now archaeologists have uncovered an unusual example of people using these tips in a 17th-century Polish cemetery near Bydgoszcz: a female skeleton buried with a sickle placed across her neck, as well as a padlock on the big toe of her left foot.

Tales of vampire-like creatures date back at least 4,000 years to ancient Mesopotamia. For instance, the Assyrians feared a demon goddess called Lamastu (literally, “she who erases”), who they said killed babies in their cribs or while still in the womb. Other ancient texts mention a similar creature, Lilith—who also appears in Hebrew texts and folklore—who steals away infants and unborn children. Neither of these could be considered “vampires” in the modern sense, but they are the precursors to the Greek legend of Lamia, an immortal monster who sucked the blood from young children.

In Chinese folklore, another type of proto-vampire, called the k’uei, were reanimated corpses that rose from the grave and preyed on the living, as were the Russian upir, Indian vetala, Romanian strigoi, and Greek vrykolakas. News reports specifically referencing vampires didn’t appear in English until 1732, as suspected “epidemics” of vampirism caused a mass hysteria that swept across Eastern Europe. By the 19th century, most of Europe was consumed by vampire hysteria, inspiring writers like John Polidori (“The Vampyre,” 1819), Sheridan LeFanu (Carmilla, 1872), and of course, Bram Stoker, whose Dracula (1897) pretty much spawned the modern vampire genre.

Naturally, the fear evoked by the presumed existence of such creatures inspired many different approaches to ensuring that the dead stayed dead. In the early Middle Ages, Russian villagers would exhume suspect corpses and destroy the body by cremation, decapitation, or by driving a wooden stake through the heart. Stakes were often secured above corpses upon burial, so the creature would impale itself if it tried to escape.

In Germany and the western Slavic regions, suspected vampires were decapitated, and the head was buried between the feet or away from the body. Other strategies included burying corpses upside down, severing the tendons at the knees, or—in the case of Greek vrykolakas—placing crosses and inscribed pottery fragments on the chest of the deceased. In places where vampires were believed to suffer from arithmomania, poppy seeds or millet seeds would be scattered at the site of a suspected vampire. (The X-Files episode “Bad Blood” humorously used this bit of folklore with Mulder’s favorite snack, sunflower seeds.)

The first early medieval graves in the region near Bydgoszcz were discovered between 2005 and 2009, when archaeologists recovered jewelry, semi-precious stones, a bronze bowl, and fragments of silk clothing. Dariusz Poliński of the Nicholas Copernicus University led the archaeological team that returned to the site earlier this year in hopes of discovering more artifacts. That didn’t happen, so they turned their attention to a nearby 17th-century cemetery in the village of Pień instead.

That’s when the researchers identified the grave containing the female skeleton. Other examples of anti-vampire burials have been found in Poland, according to Poliński. Several skeletons with severed heads were found in 2008, for example, and a body with a brick forced into the mouth and holes drilled through the legs was also found. “Ways to protect against the return of the dead include cutting off the head or legs, placing the deceased face down to bite into the ground, burning them, and smashing them with a stone,” said Poliński.

Nonetheless, this latest find is unique. While there have been reports of people placing scythes or sickles near a grave as an offering to prevent demons from entering the body, the placement of this sickle was different. “It was not laid flat but placed on the neck in such a way that if the deceased had tried to get up, most likely the head would have been cut off or injured,” said Poliński. As for the padlock on the big toe, “This symbolizes the closing of a stage and the impossibility of returning.”

Another unusual feature is that the skeleton appears to be that of a woman of high social status, given the care with which she was buried. There were also remnants of a silk cap on her head, which would not have been affordable for a member of a lower class. As for why she would have been buried in such a way, Poliński said that she had very noticeable protruding front teeth. This may have made her appearance different enough that she was deemed a witch or vampire by superstitious locals.