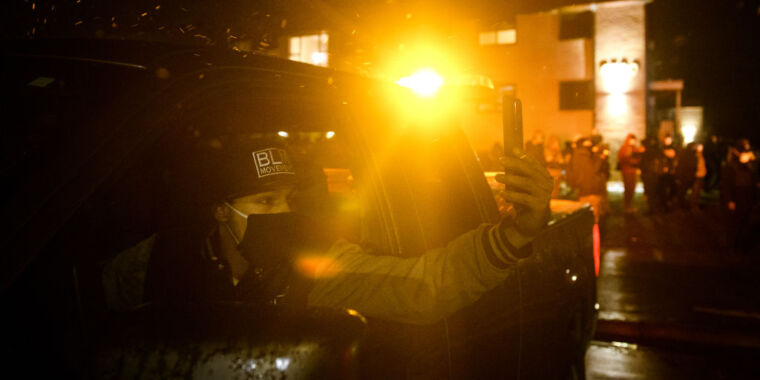 The same week that a federal judge sentenced ex-cop Derek Chauvin to more prison time for killing George Floyd, Arizona passed a law making it harder to record police by limiting how close bystanders can be while recording specified law enforcement activity. Chauvin was convicted in part because a recording showing his attack on Floyd at close proximity went viral. It was filmed by a teenager named Darnella Frazier while she was standing “a few feet away.”

The new Arizona law requires any bystanders recording police activity in the state to stand at a minimum of 8 feet away from the action. If bystanders move closer after police have warned them to back off, they risk being charged with a misdemeanor and incurring fines of up to $500, jail time of up to 30 days, or probation of up to a year.

Sponsored by Republican state representative John Kavanagh, the law known as H.B. 2319 makes it illegal to record police at close range. In a USA Today op-ed, Kavanagh said it is important to leave this buffer for police to protect law enforcement from being assaulted by unruly bystanders. He said “there’s no reason” to come closer and predicted tragic outcomes for those who do, saying, “Such an approach is unreasonable, unnecessary, and unsafe, and should be made illegal.”

This week, Kavanagh has succeeded in making close-range recording illegal in Arizona, with only a few exceptions. Perhaps most critically, the person involved in the police activity—someone being questioned, arrested, or handled by police—can record, as long as it doesn’t interfere with police actions. The same exception extends to anyone recording while in a vehicle involved in a police stop.

Additionally, anyone recording activity from an enclosed structure on private property still has a right to record police within 8 feet—unless law enforcement “determines that the person is interfering” or “it is not safe” for them to be in the area. That caveat potentially gives police a lot of discretion over who can record and when.

Kavanagh said he decided to push for this change in Arizona law after some Tucson officers complained that bystanders sometimes stood a foot or two behind them while recording arrests. The state representative also told USA Today that his decision to set the minimum distance at 8 feet “is based upon 8 feet being established by the US Supreme Court as being a reasonable distance as they applied it to people entering and leaving abortion clinics when faced with protesters.”

Responding to critics who think citizens should be able to get closer to law enforcement activity, Kavanagh said, “The argument that filming from 8 feet away does not allow for a proper view of the scene is ridiculous.” He cited impactful police brutality recordings that were recorded from further distances, including Rodney King (100 feet) and Freddie Gray (“clearly 8 to 10 feet away”).

Over the past decade, similar attempts to limit the recording of police activity have repeatedly been struck down as unconstitutional.

In 2011, a top US appeals court stopped police from arresting bystanders for supposedly “secretly” recording police activity, deeming the police action a violation of both free speech and guaranteed protections against unreasonable search and seizure. This established “a constitutionally protected right to videotape police.”

The next year, the US Department of Justice stated in a letter that recording police activity should only be “subject to narrowly defined restrictions,” praising the practice because it improves public confidence in law enforcement, helps ensure public safety, and holds police accountable. In 2017, a federal appeals court re-affirmed First Amendment rights to record police, saying that recordings both protect against abuse of power and exonerate wrongly accused cops.

Ahead of the law passing, Kavanagh was concerned about the constitutionality of his bill, especially after rules attorneys for the state House of Representatives told him it might be unconstitutional to apply the 8-foot buffer “to all police encounters.” To push the law through, Kavanagh amended the bill so that it “only applies to filming during police-citizen encounters where there is a potential for violence, such as arresting or summonsing people, questioning suspicious persons, and handling emotionally disturbed people.”

Kavanagh has expressed confidence that the new law will hold up against inquiries into its constitutionality. However, earlier this year, the ACLU of Arizona tweeted that “Not only is this bill a terrible idea, but it’s also unconstitutional” because it “places unnecessary burdens on folks and grants police too much discretion.”

Today, the ACLU of Arizona renewed those concerns, with staff attorney K.M. Bell saying that the law is a “chilling” use of the “public’s most effective tool against police wrongdoing in violation of our First Amendment rights.”

“By limiting our ability to record police interactions, this law will undoubtedly make it even more difficult to hold police officers accountable for misconduct,” Bell said in an emailed statement.

Kavanagh did not immediately respond to a request for comment on constitutional concerns now that the bill has passed.

For now, bystanders recording Arizona police activity (as defined in the bill) will need to rely on their camera’s zoom capabilities if they want to follow in Frazier’s footsteps and capture close-up footage that holds police accountable. Her close-range video has been deemed “one of the most important civil rights documents in a generation” by journalists and documentarians.