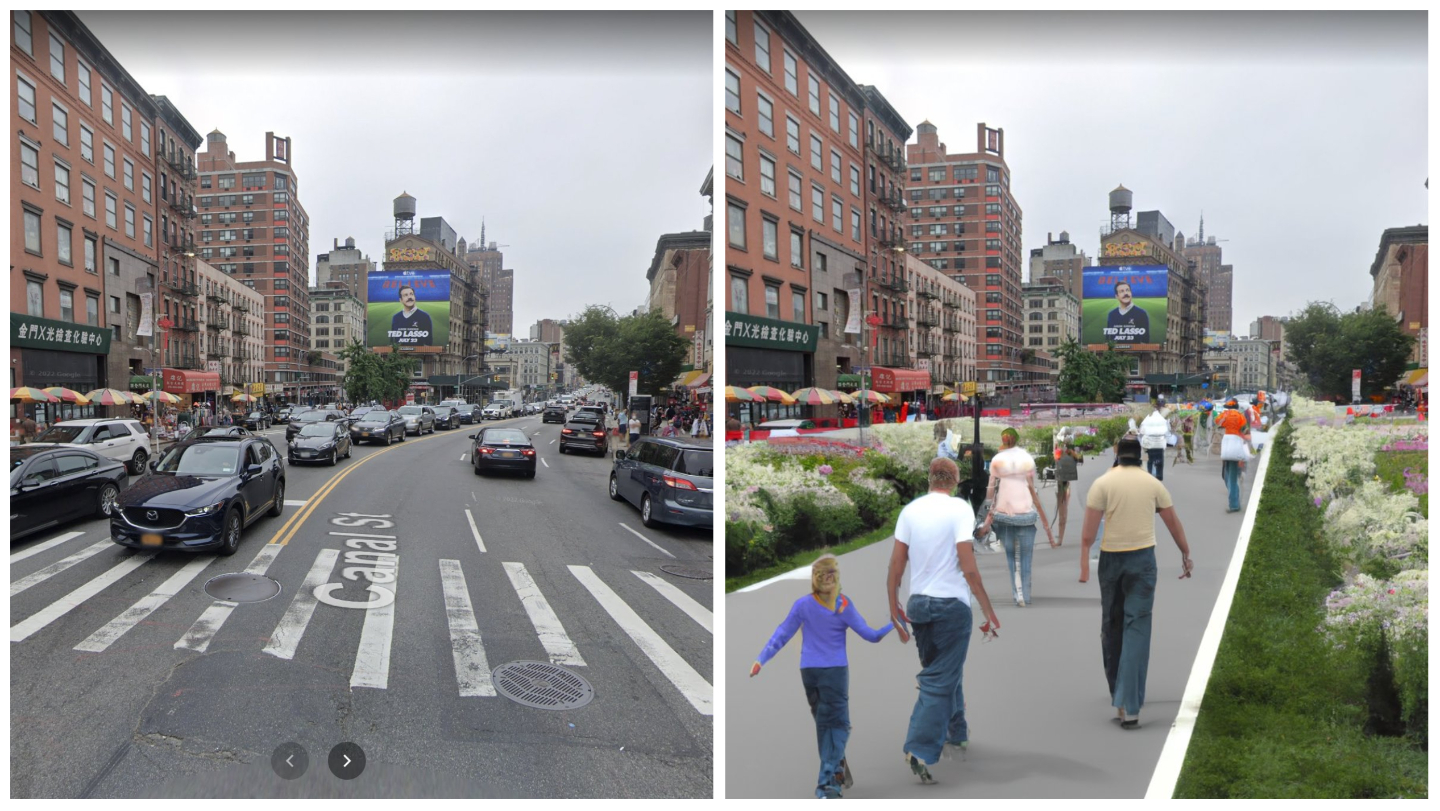 Artists Are Using AI To Imagine Cities Without Cars

While many have begun using AI tools like DALL-E to generate absurdist memes and surreal fantasy illustrations, Zach Katz, the 28 year-old artist and musician behind the account, uses the machine learning system to visualize alternate versions of American cities—ones that prioritize people instead of cars.

Since starting the account just over a week ago, Katz has attracted thousands of followers with AI-generated images of urban streets that have been purged of cars and transformed into havens for pedestrians and cyclists.

“I got kinda fed up with the poor urbanism in this country,” Katz told Motherboard. He says he was drawn to OpenAI’s DALL-E 2 as a way to continue his advocacy for safer car-free streets, having previously worked on campaigns while living in Portland, Ore. Made using carefully selected text prompts, he hopes the images will prompt people to reimagine public spaces that overwhelmingly accommodate cars.

“I’m still figuring it out,” said Katz, who now lives in New York City after a 6-month stint in Amsterdam. “It definitely does take a good amount of work to get a good picture. Part of it is just getting DALL-E to make something that isn’t totally fucked up. Sometimes it will just make a deep canyon in the middle of the street thinking it’s a water fountain.”

Katz’s website displays some of the most striking highlights of his experiments. The before-and-after transformations show busy intersections turned into car-free pedestrian parks. Major roadways like the Brooklyn-Queens Expressway become rolling hills and meadows where residents lounge in the grass as cyclists cruise along bike paths. Katz also fields requests on Twitter, though he admits it can sometimes take dozens of prompts to get DALL-E to add features that make sense from an urban planning perspective.

Nicole Aptekar, a NYC-based visual artist and avid cyclist, started experimenting with DALL-E around the same time as Katz. She started taking photos of busy city streets while on her morning runs, and then feeding them into the AI tool to imagine car-less urban environments of her own.

“I find myself regularly frustrated by how auto-centric NYC is, despite being a city where the vast majority don’t drive,” Aptekar told Motherboard. “Just like, geometrically, cars barely fit here, and so it’s rough to see our infrastructure always primarily focused around their use and storage, in opposition to transit or public space.”

Aptekar says she saw the AI tool as a way to create renders of urban projects, which normally tend to look too shiny and out of place compared to the grimy, lived-in character of the city.

“I wanted to see what things might look like, in a somewhat more realistic sense, and without being attached to some sort of real estate megaproject like Hudson Yards or the impending Penn Station disaster,” she said, referring to two urban projects that have caused no end of controversy in the city. “I figure with DALL-E, I can work towards seeing what things might look like while still feeling like NYC, since I’m using my own real photos.”

Aptekar and Katz are not expecting their AI creations to cause cities to change course overnight, but they both emphasize the importance of being able to visually show people how the places they live in could be different.

“Images are so powerful,” said Aptekar, who said she has attended Department of Transportation community meetings and seen their impact firsthand. “And with something like this, it’s easier to come up with more alternatives, hopefully bring them to communities, and rally around a better future.”

“If you’re following the account, shove this in your mayor’s face. They need to see this,” said Katz. “I’d like to let the images speak for themselves.”