On March 8, affiliates of South Africa’s ruling party, the African National Congress, murdered Ayanda Ngila, a leader with the eKhenana Commune in Durban.

The eKhenana Commune is one of the land-expropriation projects of the Abahlali baseMjondolo movement. Founded in 2005, Abahlali baseMjondolo (Zulu for “the people who stay in shacks”) is comprised of the very poor– the landless, including those no longer able to afford city rents– who have built and maintain a network of squatted communities across South Africa. 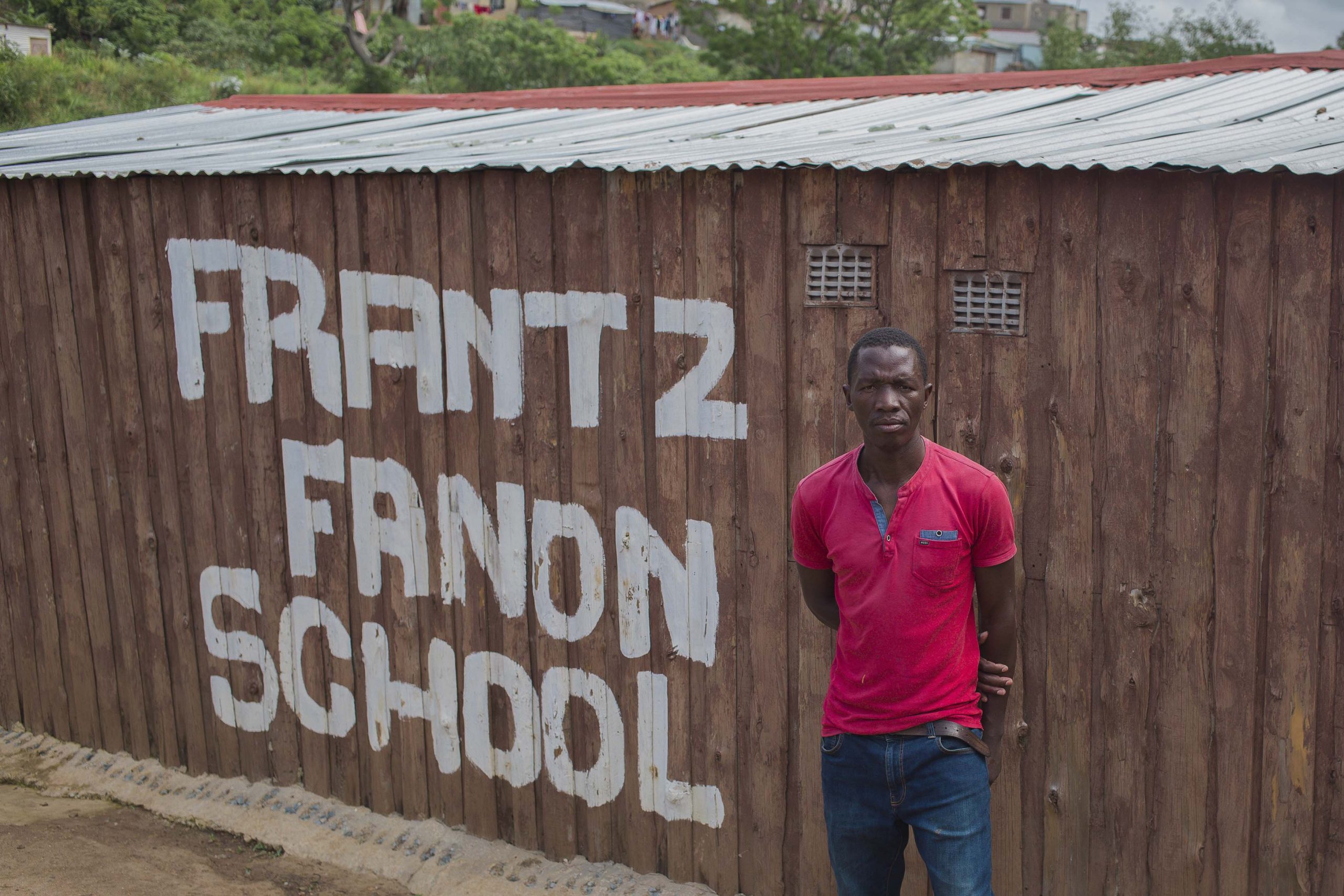 The movement arose from a wave of housing protests that began with a road blockade to defend an informal “shack community” in Durban. Road blockades have remained a crucial tactic. Today, Abahlali baseMjondolo has 100,000 members, but has been under relentless attack from the state and state-affiliated paramilitaries, including via a series of violent illegal evictions during the pandemic. Assassination and state murder have claimed the lives of many members. According to the nonprofit NewFrame, Ayanda Ngila was the nineteenth to be killed since the movement’s inception. There have now been twenty; on March 12, police shot to death Siyabonga Manqele, a resident of the eNkanini Occupation.

While outsiders have characterized Abahlali baseMjondolo as anarchist or autonomist, it disclaims specific political labels. According to its cofounder S’bu Zikode, “What we need to do is conquer this capitalist system… We are pushed below, way below, a livable life, and then our disappearance is mandated by the government as our shacks are destroyed. But we will make them see us, we will take back what is ours. We will develop an ethics of living communism and throw it in their face.”

Abahlali baseMjondolo operates on consensus decision-making, with elected unsalaried leaders (like the late Ayanda Ngila) whose role is to facilitate decision-making and consensus-building within a community’s general assembly. The majority of the Abahlali have refused to participate in party politics or vote since its founding, though there have been tactical alliances in recent years. The movement is pragmatic, seeking aid from whatever resources are available, including religious movements or state agencies.

Their approach to land use is explained in this statement made to the ruling African National Congress in 2020:

From the beginning our movement rejected the idea that land should be turned into a commodity, something to be bought and sold. We insisted that land should be distributed on the basis of human need…We insisted that women must be full and equal participants in all decisions relating to the allocation and management of land. However the state was prepared to put the commercial value of land before its social value. Profit was put before human needs. Lies were put before the truth. When there was land reform it was captured by the elite. Our suffering became a way for people in the ruling party to become rich.

It is not just that the state has failed to provide land for us. The state has also tried to violently remove us from the bits of land that we have been living on… As a result of the state and the ruling party using violence to prevent us from accessing land we have had to undertake a programme of land reform from below. We have organised numerous successful land occupations. At the moment we have more than seventy branches on active land occupations. When we have insisted that the social value of land must come before its commercial value, this has not just been empty words. We have made this a reality, through struggle. Our movement has paid a very high price for standing firm for the position that land, wealth and power should be shared. Many of our comrades have lost their lives in the struggle for land, and it is a fact that cannot be denied that for impoverished black people the price for land continues to be paid in blood.

Below is the Abahlali baseMjondolo press release concerning the murder of Ayanda Ngila:

Ayanda Ngila has been murdered at eKhenana

Ayanda Ngila, a leader in the eKhenana Commune, a brave, brilliant and committed young man, a visionary leader, a shining inspiration, was murdered at eKhenana just before 3 this afternoon. Four men entered the commune from the river side, where the communal garden is, and started shooting at Ayanda as he was working on the irrigation pipping.

The attack was led Khaya Ngubane, brother to Ntokozo Ngubane and son to NS Ngubane. This is the ANC group that has constantly borne false witness against our members, directed the police who to arrest and not to arrest, moved in and out of the office of the Chief Magistrate when our comrades appear in court, burnt homes, vandalised the infrastructure on the Commune and acted with total impunity against our members.

The Commune has come under relentlessly violent attack from the ANC, the police and the anti-land invasion unit. Its leaders have regularly been arrested on bogus charges, denied bail and detained in prison. Ayanda recently did six months in prison, was released when the charges were dropped and then sent back to prison on more bogus charges.

On Sunday he, and others, were welcomed back to the Commune from the second period in prison in a beautiful celebration of solidarity. That night the ANC attacked people with axes. Now Ayanda is dead. Another principled and committed activist has been murdered by the ANC. Another young life has been squandered by our oppressors, another family left in pain.

Ayanda is a martyr in the struggle for land, dignity, freedom and socialism. His name will be celebrated around the world. We will ensure that his life is honoured, and that his spirt lives on in our movement.

We express our deepest condolences to his family, the residents of the Commune and all who enjoyed his warm heart.

The ANC in Durban are violent criminals. We have found ourselves in a war. This is the time for solidarity and a collective refusal to bow to oppression.

No retreat, no surrender.