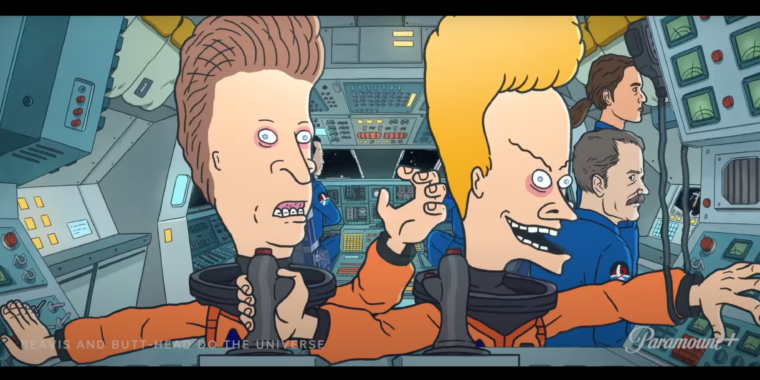 Beavis & Butt-Head Do the Universe review: An enjoyably stupid multiverse

The Mike Judge-iverse has long toyed with the inherent comedy of utter stupidity. But as anyone who has looked beyond the incessant “heh heh heh” of Beavis and Butt-head knows, Judge’s cartoons, TV series, and films are at their best when they toy with the question of exactly who in the room is the “smart” or “dumb” one.

The great news about this week’s Beavis and Butt-head Do the Universe, a straight-to-Paramount+ film debuting on Thursday, June 23, is that it finally sees Judge and co. bring a smart-kind-of-stupid approach to his most famous cartoon. This week’s film achieves this far more successfully than the series’ other feature-length film from 1996. Its ideas meld well with the series’ bottom-of-the-toilet stupidity and feel fresh instead of like they were ripped from other Judge series.

Failing forward, all the way to space

The film opens with madcap comedy in its sights, as Beavis and Butt-head are in high school in the ’90s, still oblivious to anything that doesn’t resemble boobs, explosions, sticky snack foods, or phrases that sound like euphemisms. (Heh, heh. “Sticky.”)

The macguffin that sets this film’s plot in motion is about as high of a concept as you’ll get from a crudely drawn ’90s series. After causing untold amounts of destruction and bodily harm, Beavis and Butt-head are put in front of a judge—who, lucky for them, has been freshly influenced by a certain ’90s pop-culture relic. “When I see these two boys today, I don’t see their failure,” he tells a packed courtroom while the defendants stare confusedly into space. “I see our failure.”

The judge decides that these two idiots’ criminal negligence should be rewarded with a trip to a special NASA-themed event. This becomes a running theme in Do the Universe: an adult sees these boys acting like idiots, gives them the benefit of the doubt, and puts them in a position to cause greater amounts of damage and death. The result is an increasingly scorching-hot fireball of I Love Lucy-like, misunderstanding-driven comedy. And the film knows better than to fret about tightening up the logic when every NASA nerd in the room eventually decides that, yes, it’s worth putting a crucial American agency in Beavis and Butt-head’s hands: “We could finally get Americans interested in the space program again.”

No crotch is safe

Between each giggling double entendre and each juvenile visual gag, Do the Universe is careful to insert diametrically opposed people into the plot, usually with their own anxieties and problems keeping them occupied enough to look away for a second while the titular duo attends to chaos. (It’s the cartoon version of a professional wrestling referee looking away while someone gets smacked in the crotch with a steel chair.)

This setup aids the laughs when Beavis and Butt-head get away with stuff, certainly, but the filmmakers also use it to achieve different kinds of laughs: A subordinate government weakling frequently gets trampled upon; a real estate agent has questions about the unhappy couple that has walked into a for-sale showing, suggesting that their love life has gone awry; a professor allows the duo to interrupt one of her classes so she can impart a “teachable moment”—and it’s no surprise that neither Beavis nor Butt-head interprets the lesson correctly.

Better than perhaps all of those instances is the film’s wacky sci-fi angle, which sees the duo tear a hole in the space-time continuum and thus put the entire universe in jeopardy. This introduces at least one other version of both lead characters into the film, and the resulting confrontations are the film’s highlight. One version of Beavis lands an incredible meta-commentary joke when introducing himself, and I don’t want to spoil it—or, really, any jokes involving additional versions.