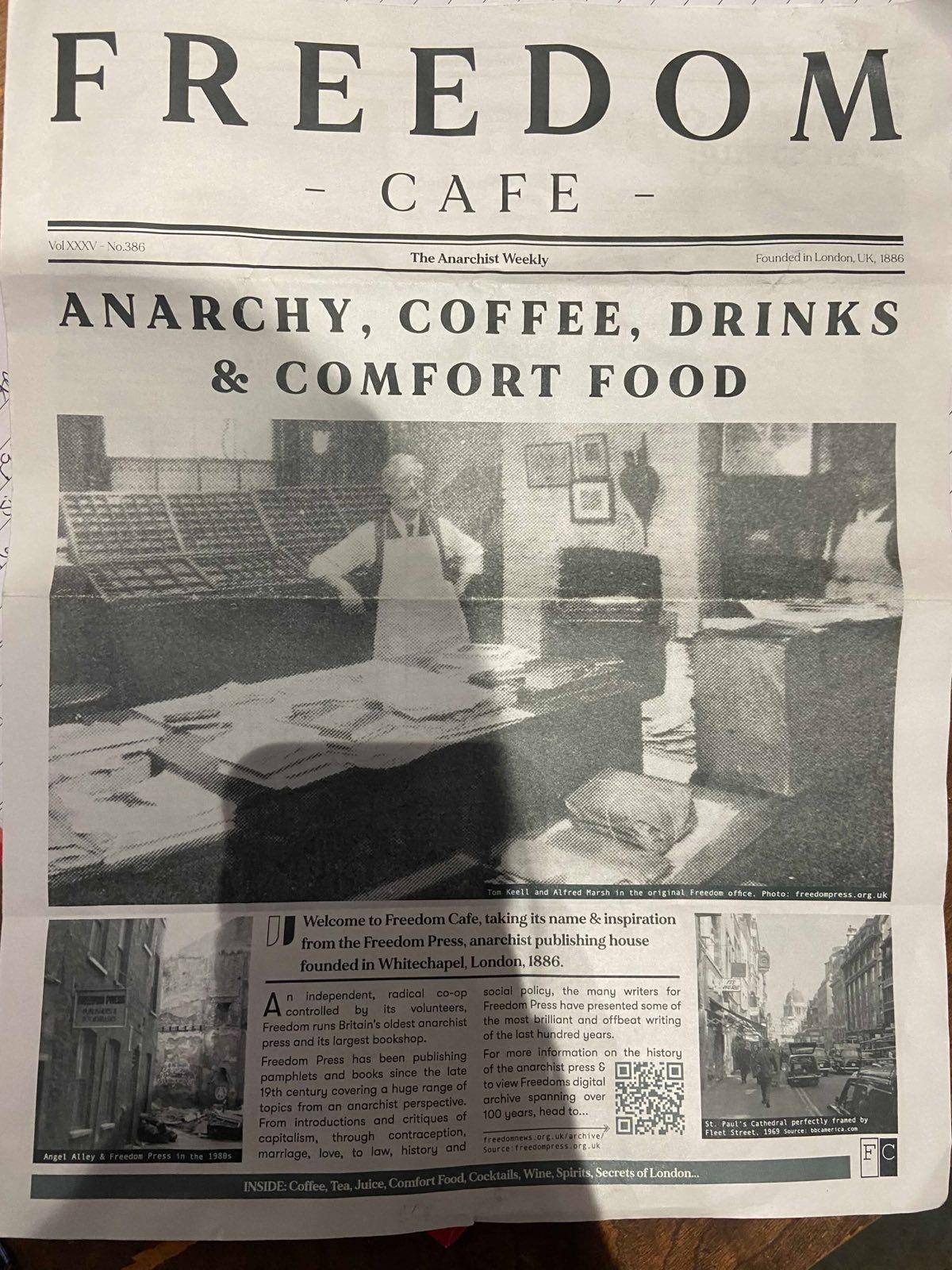 Many could be forgiven for thinking it was a belated April Fools prank when, at the beginning of the month, Freedom Press released a statement reading that close to their premises in Whitechapel and out with their knowledge, the colossal Hilton hotel group had opened an upmarket cocktail bar bearing the name ‘Freedom Café’. Marketed towards “independent thinkers and coffee drinkers”, in true anti-consumerist fashion, the bar sells £14 cocktails named after book titles from the publishing house. Their menu comes in the style of an old pamphlet titled “Anarchist Weekly” and references the historic founding of the publishing house. Readers are enticed inside to find “anarchy, coffee, drinks, and comfort food”. Believe it or not, this appears not to be a joke.

While it may be hard to fathom exactly what sort of anarchy could be found in a gleaming, 40 story hotel owned by the world’s third largest hotel chain, a more sinister revision appears on closer inspection. The café’s glossy branding conveniently skims over the anti-capitalist foundations of the anarchist movement, instead relegating it to a quirky subculture. Their menu references critiques of capitalism and public policy, social forces fighting against organisations like themselves, yet dismisses these as simply “brilliant and offbeat writing”. The vintage styling suggests a historic bygone era, instead of a social centre still very much alive and kicking. Freedom Press, no longer just Britain’s oldest anarchist press, now finds itself as unlikely guidebook fodder for a rapidly gentrifying tourist hotspot.

Although far from novel, this commodification of social movements has recently become a hot topic. In what the NY Times have branded ‘activi-capitalism’, corporations often piggyback political movements for social credit, a process that usually involves heavy repackaging of the movement’s demands to make them more palatable for the capitalistic purposes of the executive boardroom. Nike, one of the world’s most prolific exploiters of People of Colour in its vast network of sweatshops, recently ran adverts featuring American football star- turned activist Colin Kaepernick with a vague message of support for the less radical aspects of the fundamentally leftist Black Lives Matter movement: “believe in something, even if it means sacrificing everything”. Pepsi sparked outrage with their since recalled advert where white millionaire Kendall Jenner supposedly solves systemic racism by strutting through a protest and handing a can of juice to a police officer. The advert shows smiling faces and attractive young protesters playfully waving their hands around, a far cry from the near insurrection that almost occurred across the United States.

Anarchism as a brand building exercise

The anarchist movement has been far from spared from this brandwashing, with its slogans and imagery having long been used by marketing busybodies to signify a rejection of the status quo. Decades before frontman John Lydon embarked on his career as a butter salesman, the Sex Pistols burst onto the charts with “Anarchy In The UK”. The same slogan soon found itself plastered across adverts for Cadbury’s ‘Fuse’ bar, piquing the excitement of bored suburbans by offering a “mixed up bar for a crazy world” and touting the most common misconception of anarchism; that far from Proudhon’s statement that “Anarchy is order without power”, it is instead a movement aimed at chaos and societal destruction. Fast forward a few years, and this chaotic, dangerous imagery continues. Axe, the parent company of every sweaty teenager’s favourite stocking filler, Lynx Africa, offers for-him and for-her fragrance ‘Axe Anarchy’. In their televised advert, a number of passing strangers catch scent of each other, stopping to stare longingly and unleashing a chain of disasters elevating in their diabolicalness. In the closing shot, military helicopters fly towards an apocalyptic New York, while a smooth voice encourages buyers to “unleash the chaos”.

Slightly truer to the anti-establishment and non-hierarchical reality of the movement, certain marketing gurus have sought to capitalise on anarchist ideals in their quest to label clients as rogue outsiders. Aaron Keller, co-author of ‘The Physics of Brand’ and founder of marketing agency Capsule which lists Target and Jack Daniels as clients, has spoken of the need to “rebrand anarchy and anarchists”. Writing in the Twin Cities Business magazine, he urges that, “if anarchy can be rebranded as a safe place to reject old hierarchies rather than a raging crowd looking to abolish all government, anything is possible”. Bizarrely, in another April-Fools-esque paragraph, he urges that, “… behaviours associated with the current brand of anarchy also need to change… we need fewer burning buildings and more peaceful protests. These new behaviours can be incentivized through rewards programs like ‘points for protesting,’ with loss of points for, say ‘throwing Molotov cocktails, again’. Points get you a free month of Netflix, so you can spend more time on your couch and less time breaking things”. The picture on the article? An anarchist ‘A’ symbol printed on a shopping bag.

Keller may well be another prankster. Yet this ethos seems to have caught on with many a modern business striving to present itself as a bad-boy, forward-thinking outlier to the corporate riff raff. Supreme, one of the world’s most lucrative and exclusive brands owned by industry behemoth VF corporation, released a collaboration with high-end designer Jun Takahashi in the form of a black jacket with ‘Anarchy is the key’ emblazoned across the back. The key to what? Uncertain, yet Takahashi has been careful to distance himself from the movement, stating in Love magazine that, “I am not into thoughts of politics or “anti” something now”. Pizza Punks, a restaurant chain owned by a Glasgow-based hospitality group with ambitious growth plans for 25 stores by 2025, state that they, “love challenging the norm with [their] anarchist and anti-establishment outlook”. A communique on their Facebook page cries “POWER TO THE PEOPLE”. Their vision of anarchy? Unlimited toppings on a £12 pizza. Anarchism, with its many interpretations and iterations, has now found new forms as a catchy clothing slogan, or a pizza price deal encouraging rampant consumerism.

As twisted as this profiteering is, its effectiveness cannot be denied. Perhaps most famously, beer behemoths Brew Dog urge their customers to “ride towards anarchy” and “burn the established system to the ground”. A steady stream of marketing and publicity stunts cherry-pick social movements to repackage them as beer logos, most of which consistently fall far short of the mark. Their claims of being a “community owned business” are contradicted by increasingly despotic owners James Watt and Martin Dickie sharing almost all voting power with private equity firm TSG Consumer Partners. Their campaign against gender stereotyping manifested itself in a new beer released on Women’s Day 2018 that came in garish pink packaging and was named ‘Pink IPA’. Their ‘support’ for trans rights raised the ire of the movement when their release of a ‘gender changed beer’ relegated gender identities to mere marketing fluff. Yet this anarchic branding, outlier image, and double-speak politicising has definitely contributed to the meteoric rise of BrewDog, a rise that now puts them amongst the most controversial employers in the UK. They even sued a small independent bar for using the name ‘Punk’, and in the final straw, accepted MBEs in 2016. Because what could be more anarchist than private equity, lawsuits, and the Queen?

The jury appears to be settled on anarchist branding: it works. As with almost everything, the denizens of capital have managed to take what is perhaps industrialised society’s greatest rejection of capitalism and repackage it as just another tool in the vast repertoire of marketing bullshit. From chaotic imagery that cuts through the humdrum of middle-class life, to companies positioning themselves as daring outliers, the movement consistently finds itself commodified for the raking in of cash. Perhaps, to avoid a future where anarchists rebrand themselves as marketing gurus and swap the protests for lengthy Netflix binges, this could be a reminder that anarchism is more than a brand, more than an aesthetic, and more than a subculture. Perhaps this corruption of the movement should be an indication to avoid rigid tropes, and to diversify communications so that the real message of anarchism, the ideals, hopes, and dreams it proposes, cut through what has become often overworked and cliched imagery. A good place to start might be a read over some of the titles offered by anarchist publishers. There’s a good one in Whitechapel, London, but just make sure you go to the right door. You could accidentally find yourself ordering a book and being served with a coffee infused, triple distilled cocktail.