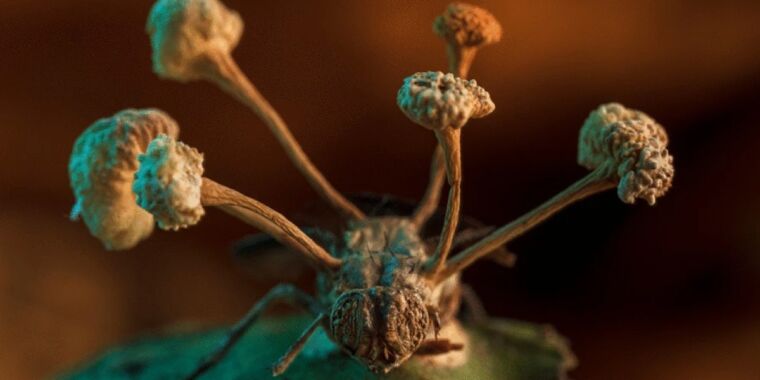 The striking photograph above vividly captures the spores of a parasitic “zombie” fungus (Ophiocordyceps) as they sprout from the body of a host fly in exquisite detail. Small wonder it won the 2022 BMC Ecology and Evolution image competition, featured along with eight other honorees in the journal BMC Ecology and Evolution. The winning images were chosen by the journal editor and senior members of the journal’s editorial board. Per the journal, the competition “gives ecologists and evolutionary biologists the opportunity to use their creativity to celebrate their research and the intersection between art and science.”

Roberto García-Roa, an evolutionary biologist and conservation photographer affiliated with both the University of Valencia in Spain and Lund University in Sweden, snapped his award-winning photograph while trekking through a Peruvian jungle. The fungus in question belongs to the Cordyceps family. There are over 400 different species of Cordyceps fungi, each targeting a particular species of insect, whether it be ants, dragonflies, cockroaches, aphids, or beetles. Consider Cordyceps an example of nature’s own population control mechanism to ensure that ecobalance is maintained.

According to García-Roa, Ophiocordyceps, like its zombifying relatives, infiltrates the host’s exoskeleton and brain via spores scattered in the air that attach to the host body. Once inside, the spores sprout long tendrils called mycelia that eventually reach into the brain and release chemicals that make the unfortunate host the fungi’s zombie slave. The chemicals compel the host to move to the most favorable location for the fungus to thrive and grow. The fungus slowly feeds on the host, sprouting new spores throughout the body as one final indignity.

Those sprouts burst and release even more spores into the air, which go forth to infect even more unsuspecting hosts—what García-Roa calls “a conquest shaped by thousands of years of evolution.” Board member Christy Anna Hipsley praised García-Roa’s winning photograph for its “depth and composition that conveys life and death simultaneously—an affair that transcends time, space, and even species. The death of the fly gives life to the fungus.”

The winners and runners-up in individual categories are below.

This image of a Bohemian waxwing (Bombycilla garrulus) feasting on fermented rowan berries is the work of ecologist Alwin Hardenbol, a postdoc at the University of Eastern Finland. Per Hardenbol, the birds love the berries so much, they will migrate to wherever the berries are most plentiful—not just Finland, but also Western, Eastern, or Central Europe. Waxwings can eat twice their own weight in rowan berries in a single day. The birds get sustenance, and the berries get to disperse their seeds.

However, “while this relationship is highly beneficial for seed dispersal, it does not come without a cost for the birds,” Hardenbol said. “As the berries become overripe, they start to ferment and produce ethanol which gets Waxwings intoxicated, sometimes leading to trouble for the birds, even death. Unsurprisingly, waxwings have evolved to have a relatively large liver to deal with their inadvertent alcoholism.”

Alexander T. Baugh, a behavioral biologist at Swarthmore College, snapped this image of a hungry fringe-lipped bat (Trachops cirrhosis) feasting on a male tungara frog (Physalalamus pustulosus) at the Smithsonian Tropical Research Institute in Panama. The bats’ hearing is fine-tuned to detect the low-frequency mating calls of the frogs, pitting natural and sexual selection against each other. And should their froggy prey prove to be of the poisonous variety, the bats’ salivary glands can neutralize the toxins in the skin.

Samantha Kreling of the University of Washington captured a trio of African elephants sheltering from the sun under a large baobab tree in Mapungubwe National Park, South Africa. The baobab tree has evolved to thrive in extremely dry climates by storing water in its trunk whenever drought strikes. Elephants in turn can dig into those trunks to get water to drink.

The image shows visible marks where the elephants have stripped the bark in search of precious water. Baobab trees have historically healed quickly from this kind of damage, but climate change has brought more drought, and the elephants have been stripping the bark faster than the trees can heal. The editorial board felt this image “highlights the need for action to prevent the permanent loss of these iconic trees.”