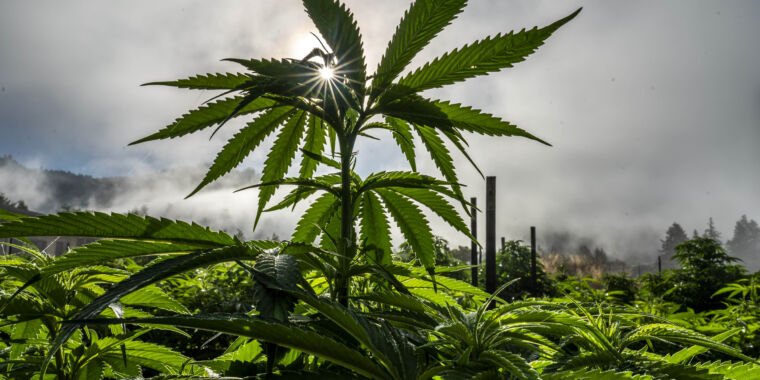 President Biden on Thursday announced that he is pardoning all prior federal offenses of simple marijuana possession and encouraged state governors to do the same for state offenses. He also directed federal officials to review how marijuana is classified under the Controlled Substances Act.

“There are thousands of people who have prior federal convictions for marijuana possession, who may be denied employment, housing, or educational opportunities as a result,” Biden said in a statement. “My action will help relieve the collateral consequences arising from these convictions.”

The blazing announcement means that all prior charges, convictions, and not-yet-prosecuted offenses will be pardoned. The Justice Department will set up an administrative process for those affected to obtain a certificate of pardon.

Senior administration officials estimated that over 6,500 people will get federal pardons and thousands more with convictions under code in the District of Columbia will be impacted. However, the officials noted that there are currently no people in federal prisons solely on simple marijuana possession convictions. The vast majority of simple marijuana possession convictions are state convictions, which will not be affected by the federal pardons. That’s why Biden has called upon governors to extend the pardons to those charges.

“No one should be in jail just for using or possessing marijuana,” Biden said in a video address announcing the actions.

Generally, Biden called the criminalization of marijuana a “failed approach” and noted that it has disproportionately harmed Black and brown communities despite the fact that white Americans use marijuana at a similar rate.

As for why Biden was taking these actions now, officials suggested he was following through on his campaign commitments.

The last aspect of today’s announcement is that Biden is calling on the secretary of Health and Human Services and the attorney general to “expeditiously” review how marijuana is classified. Currently, marijuana is listed as a “Schedule I” drug, which is the designation for the most dangerous substances, placing marijuana in the ranks of heroin and LSD, and at a higher designation than methamphetamine and fentanyl. Senior officials said the review will take time and that there’s currently no set timeline or deadline but that it should be conducted swiftly.

“Too many lives have been upended because of our failed approach to marijuana,” Biden said. “It’s time that we right these wrongs.”