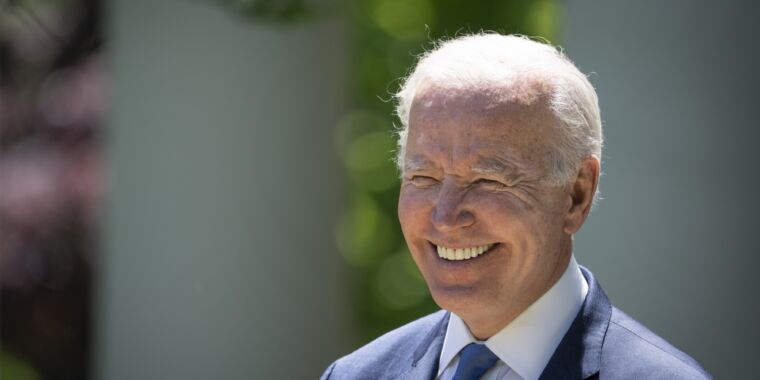 Consumer advocates are not impressed by President Biden’s announcement that Internet service providers have agreed to provide cheap broadband to low-income Americans.

Biden’s announcement on Monday touted voluntary commitments from Comcast, Charter Spectrum, AT&T, Verizon, and 16 other ISPs to offer $30-per-month broadband to households eligible for discounts under the Affordable Connectivity Program (ACP). Each of the 20 companies “committed to offer all ACP-eligible families at least one high-speed plan [with download speeds of at least 100Mbps] for $30/month or less, with no additional fees and no data caps,” the White House said. That effectively makes the broadband plans free for many people because the ACP provides eligible households with discounts of $30 a month.

But this is just a short-term improvement while Biden’s broadband agenda is stalled by the failure to give the Federal Communications Commission a Democratic majority, advocacy groups said. Some of the same ISPs praised by Biden have lobbied behind the scenes against Biden nominee Gigi Sohn, who is still waiting for a Senate confirmation vote, the groups said. Comcast recently hired a lobbyist to work on “FCC nominations,” as reported in January.

The announcement marks welcome efforts to lower the cost of this essential service. But it comes at a time when the FCC—the agency that oversees the country’s communications industry—remains deadlocked thanks to these very same Internet service providers’ stall tactics. Though Biden nominated Gigi Sohn to the FCC more than six months ago, Democratic leaders have thus far failed to call a vote to confirm her, leaving the agency without the 3–2 Democratic majority it needs to rule on a number of critical matters, including oversight of the ACP program. An industry-financed smear campaign geared at hobbling the FCC has blocked progress on Sohn’s nomination.

A similar response came from Public Knowledge, the consumer advocacy group that Sohn co-founded in 2001. After leading Public Knowledge as its CEO for over a decade, Sohn served as a counselor to then-FCC Chairman Tom Wheeler from 2013 to 2016.

“These voluntary commitments form a strange juxtaposition to the aggressive delay efforts orchestrated by the very same broadband providers, wireless carriers, and broadcasters the FCC regulates to stall the confirmation of Gigi Sohn, a strong consumer champion, to the agency,” Public Knowledge said. “These delay tactics hamstring the agency’s work to provide oversight and enforceable consumer protections for affordable broadband for all Americans.”

Public Knowledge CEO Chris Lewis added that “this is a short-term win when Americans need bolder action from their policymakers to ensure affordable broadband in the future. Almost a year and a half into this administration, we continue to have no oversight of competition and pricing in the broadband market by Congress or at the expert agency on communications networks, the FCC.”

Biden nominated Sohn on October 26, 2021, after a surprisingly long delay. The Senate Commerce Committee sent the nomination to the full Senate on March 3, but there’s been no final vote. Republican senators have painted Sohn as an enemy of free speech, and lobbying campaigns against her nomination include one that implausibly claims she doesn’t support the expansion of rural broadband.

Biden is celebrating the same telecom companies that are “undermining his administration’s broadband agenda,” said the Community Broadband Networks Program at the Institute for Local Self-Reliance, an advocacy group for municipal Internet services.

“The Biden administration took a painfully long time to nominate the most obvious candidate for the position—Gigi Sohn—and has done precious little to have her confirmed in a reasonable time frame. Though it would be easy to blame Republican opposition, the truth is that it simply does not appear to be a priority for the administration,” said Community Broadband Networks Program Director Christopher Mitchell.

Meanwhile, ISPs praised themselves for their voluntary commitments. “We’ve never been more committed to closing the digital divide and helping people get connected to the Internet,” Comcast said yesterday. Cable-industry lobby group NCTA said the cheap plans “reflect a significant advance in the long-standing efforts of cable operators and many others to help vulnerable households overcome obstacles that have deterred some from subscribing to broadband at home.”