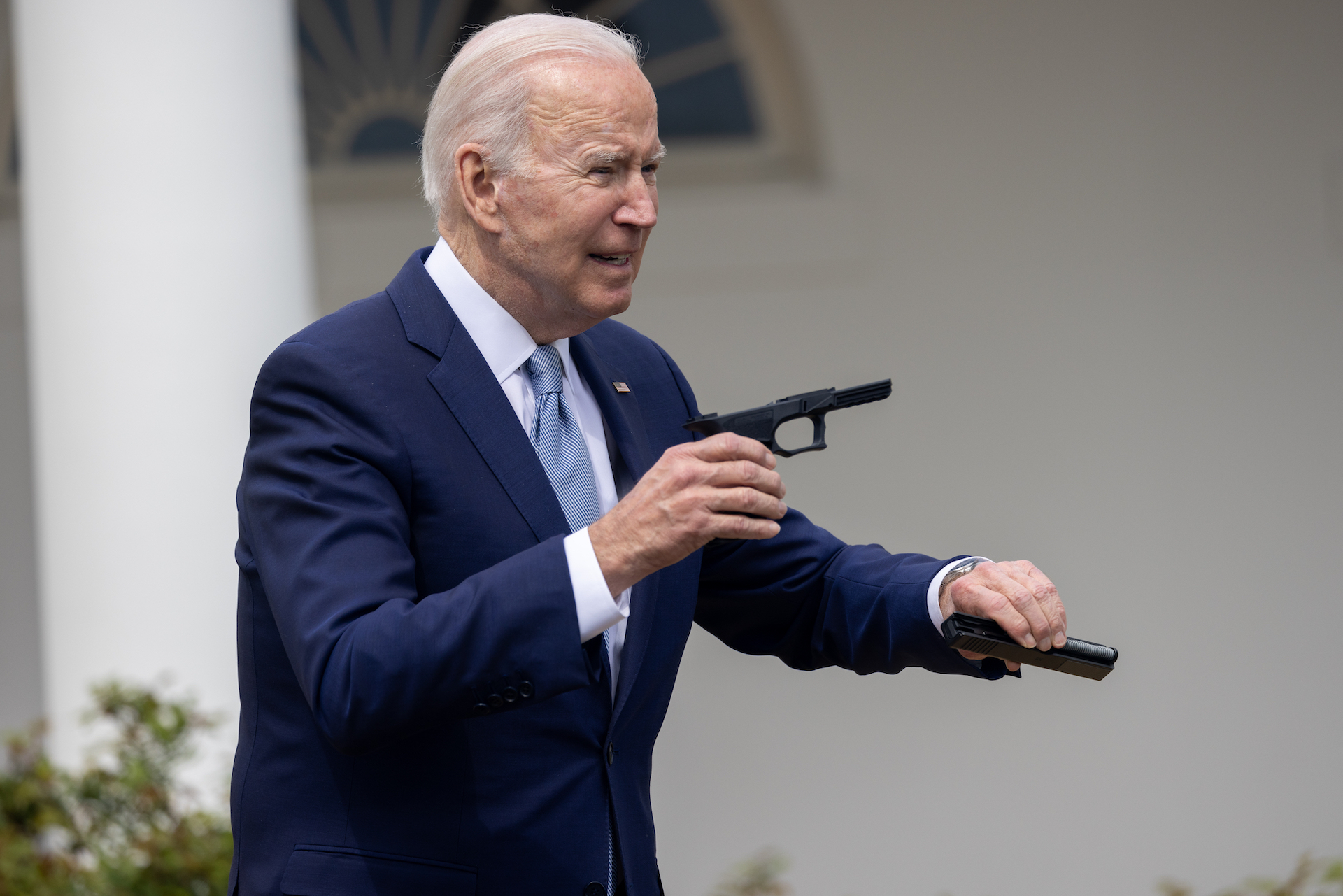 When President Joe Biden stood in the Rose Garden on Monday afternoon and picked up the components to a disassembled handgun, he was aiming to prove a point: The parts sold online in so-called “ghost gun” kits can be turned into deadly handguns with relative ease.

“Folks, a felon, a terrorist, a domestic abuser can go from a gun kit to a gun in as little as 30 minutes,” Biden said. “Buyers aren’t required to pass background checks because these guns have no serial numbers. When they show up at a crime scene, they can’t be traced.”

The president brandished the pistol parts as he announced new regulations aimed at limiting the proliferation of ghost guns, a catchall for untraceable, “privately made firearms” said to be fueling gun violence in some cities. But he also acknowledged that reforms have taken nearly a year to come “because I was having trouble getting it passed in the Congress.”

With gun control legislation dead on arrival ahead of the midterm elections, Biden was forced to rely on the limited powers of the ATF, the federal agency that regulates firearms, to tweak the rules on when a box full of gun parts is considered a firearm under the law.

As Biden put it: “If you buy a couch you have to assemble, it’s still a couch. If you order a package like this one over here that includes the parts you need… you bought a gun.”

But without a major change in federal law, several experts told VICE News, anyone who wants to build an untraceable ghost gun will have little trouble acquiring the necessary parts, even after Biden’s new rules are enforced in the coming months.

“It’s going to have zero effect,” said Rick Vasquez, former chief of the ATF’s Firearms Technology Branch, who now works as a private consultant. Vasquez said the firearms industry has anticipated the changes for over a year and adapted by limiting the sale of kits with “readily assembled” components, which going forward will be regulated like other firearms.

But Vasquez says the rules won’t stop dealers from selling individual unfinished parts, or prevent private citizens from using a 3D-printer to make an unserialized, untraceable Glock-type pistol or AR-style rifle (among the most common models of ghost guns) in their living room.

“Unless the ATF is checking every single UPS package and mail carrier in the U.S., they’re not going to know I have the components to complete a firearm,” Vasquez said. “Do you think the people who are making these illegally are going to worry about going to a licensed dealer and getting their gun registered? Absolutely not.”

“Do you think the people who are making these illegally are going to worry about going to a licensed dealer and getting their gun registered? Absolutely not.”

The Biden administration’s new rules will require a limited number of existing ghost guns to be registered with a serial number, but only in instances when someone transfers their weapon to a federally licensed firearms dealer or gunsmith.

An ATF spokesperson said in a statement to VICE News that “a person who is not prohibited from possessing firearms will still be able to make their own firearm” by machining or 3D-printing so long as they obey other existing federal gun laws.

A fact sheet issued by the Department of Justice also made it explicitly clear that “privately made firearms are not illegal” so long as the person is following other existing laws on the books, which can vary widely across jurisdictions. Only ten states have enacted laws “to at least partially address the problem of undetectable or untraceable guns,” according to the Giffords Law Center, with some cities and municipalities enacting their own local restrictions.

Know something about ghost guns or the ATF’s new regulations? Contact the reporter at keegan.hamilton@vice.com.

California laws are among the most strict, with the state’s governor and attorney general currently backing new legislation that would mimic a controversial Texas abortion law, enabling residents to sue manufacturers and distributors of assault weapons and ghost gun kits. California has also filed lawsuits against companies accused of using “false and deceptive advertising practices” to sell frames and receivers, attempting to move the needle as the state grapples with being awash in ghost guns.

Homemade firearms have been around for decades, but ghost guns emerged about five years ago as the internet made online parts sales cheap and convenient. Since January 2016, the ATF said it has received “approximately 45,000 reports of privately made firearms recovered by law enforcement in criminal investigations—including 692 homicides or attempted homicides,” with the number of guns recovered increasing yearly and linked to domestic terrorism.

But experts like Rob Pincus, a firearms instructor who previously helped guide VICE News through the process of building a 3D-printed Glock pistol, remain unconvinced the new Biden rules will do anything to take illegal ghost guns off the streets.

“It looks like this is another government action that will affect responsible gun owners far more than it will affect violence in America,” Pincus said. “I don’t see any aspect of the proposals that will reduce negative outcomes involving armed criminals.”

Others in the 3D-printed gun community echoed that assessment, with a member of the collective Are We Cool Yet?, which designs and releases digital blueprints for a staggering range of weapons, saying “there’s really no change for us.”

Even some of the most outspoken members of the ghost gun community said they were pleasantly surprised by the limited scope of the new rules. Cody Wilson, the creator of the first 3D-printed gun, who has fought a long legal battle over the right to distribute gun files online and faced criminal charges in Texas, told VICE News the regulations are “probably underwhelming if you’re a gun control advocate.”

“They’re just trying to stop companies from selling guns in a box,” Wilson said. “Blocks of metal or polymer, things in their primordial state of course can’t be considered firearms, and neither are 80 percent AR-15 receivers or anything else we’ve become accustomed to.”

The ATF said it received over 290,000 public comments about the new ghost gun rules, which will take effect in around 120 days. The policies are certain to face legal challenges from pro-gun groups, including Wilson, who said that while the impact of the changes will be minimal “of course we’ll be suing anyway.”