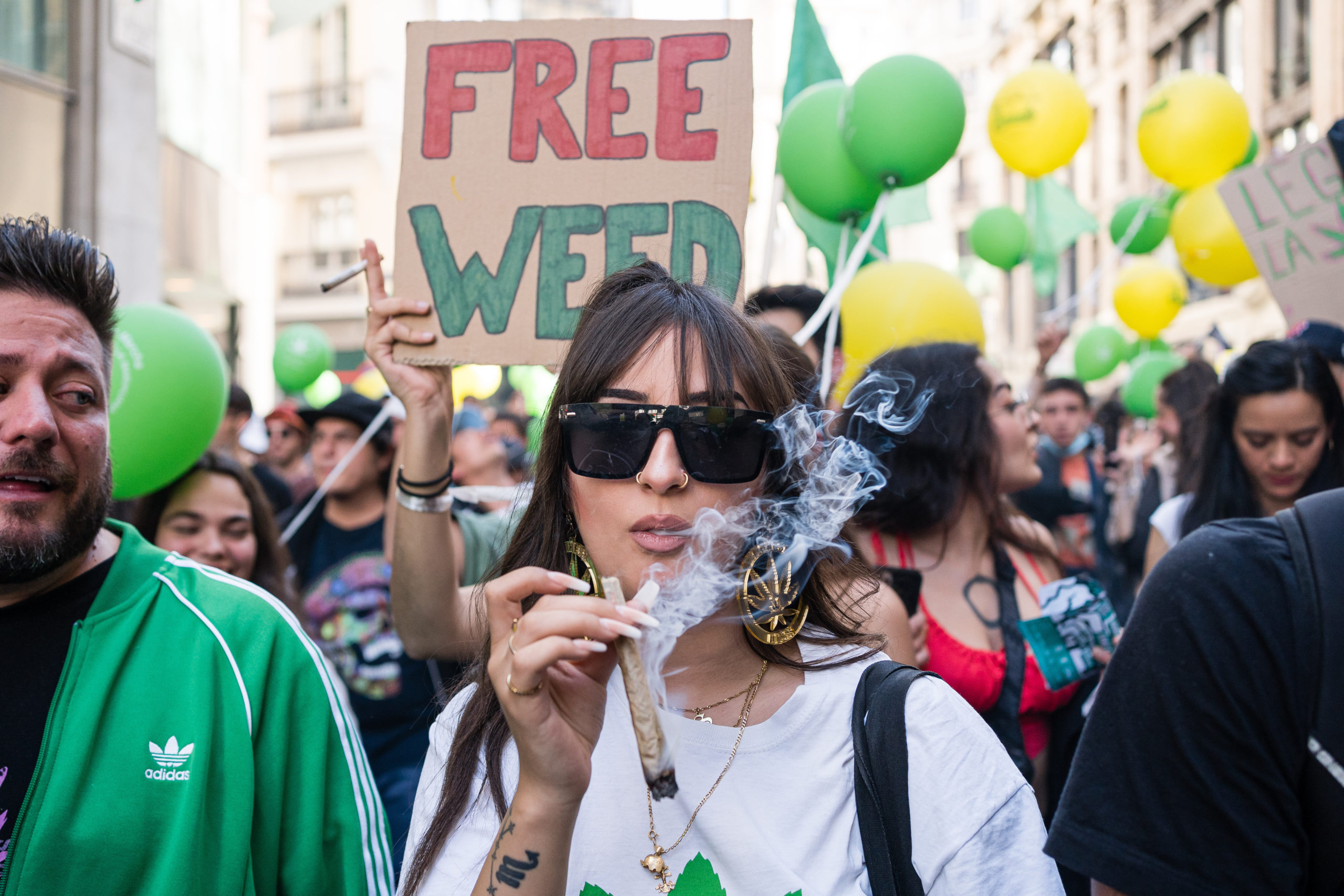 On Thursday, President Joe Biden issued a mass pardon for everyone who’s been convicted of simple possession of marijuana under federal law. It won’t get anyone out of prison—currently, no one is serving time in a federal detention center for simple possession. But it will help thousands of people who have that conviction on their records, a blemish that can prevent them from getting into college, finding a job, securing housing, and accessing loans and federal benefits, among other limitations.

At least 6,500 people will be pardoned, a Biden official said during a press call on Thursday, along with thousands more who were convicted of the crime in D.C. But that won’t happen overnight. The Justice Department is currently working on a system whereby folks can apply for a certificate of pardon, which they’ll be able to show to prospective employers, banks, landlords, and others who see their criminal records as a sticking point.

The vast majority of simple possession convictions happen on a state level, which Biden’s pardon doesn’t address. But he did urge governors to follow his lead and issue similar pardons of their own. He also asked the Department of Justice and the Department of Health and Human Services to “expeditiously” review weed’s status as a Schedule I drug, a classification it shares with heroin and LSD. Dropping marijuana down to Schedule II, where drugs like methadone and oxycodone currently sit, or descheduling it completely, could be a step toward federal decriminalization.

For help unpacking exactly what Biden’s pardon is going to accomplish, VICE called up Maritza Perez, the director of the office of federal affairs at the Drug Policy Alliance. Perez weighed in on what this pardon might mean for the future of marijuana policy, and how it’s going to help the folks impacted by it.

VICE: On a big-picture level, what are your thoughts on this pardon?

Maritza Perez: I’m excited that we are finally seeing some sort of federal marijuana reform, even if it is incremental like this. It really is a big deal for the thousands of people who are going to be impacted. But we need broader relief, which is what our legislative advocacy has focused on. I’m hoping that it spurs Congress into action.

How exactly is this pardon going to help the folks it impacts, and how significant will it be for them?

This will be potentially life-changing for those individuals. There are so many limitations on what somebody with a criminal record can do in terms of employment, housing, education—so many facets of their lives. A pardon doesn’t remove a person’s criminal record. But it does give them sort of a second chance in the sense that they can show that they’ve been pardoned, and that will hopefully help remove some of those barriers.

So these simple possession convictions will still show up on someone’s criminal record. They’ll just have the ability to say, “Hey, I know this doesn’t look great, but I’ve been pardoned.”

What is simple possession, and how does it differ from other possession charges that aren’t going to be covered by this?

Do you have a sense of when folks will actually have pardons at their disposal?

I’m hoping it’s pretty soon. The pardons aren’t automatic. People will have to apply. The attorney general and the pardon board are going to have to work together to create a process by which people can apply for their pardons. That might take weeks, maybe even months. But I don’t think it’ll take months. I imagine that because it’s a priority for President Biden, they’ll probably try to work on it pretty quickly.

Biden urged state governors to follow in his footsteps and issue mass pardons of their own for simple possession. Do you think they’ll do that?

I do hope that the state governors take him up on his recommendation because we know that most convictions are actually at the state and local level. So that could have a tremendous impact. Think about people who have state-level convictions, but don’t have access to federal benefits because of those convictions. It could go a long way. I think what Biden did was provide political cover for those governors, if they felt that [issuing this kind of pardon] was a politically compromising thing to do. But that’s the thing: I actually don’t think it is. If you look at marijuana polling for the last few years, it’s an incredibly popular issue across party lines and demographic groups. Most Americans agree that marijuana should be decriminalized, that the ways that we’ve applied our laws have been unfair, and that people shouldn’t face severe criminal consequences for an activity that is largely legal in the U.S. at this point.

If governors across the country do take Biden up on this, do you anticipate it happening in blue states more than red states?

Generally, I think this is something that more progressive governors would probably be more inclined to do. But I think we could see some surprises. This is a popular issue across demographic lines, and expungement does have support.

If a wave of governors issue this same pardon at a state level, how many people could that potentially help?

It would be hard to quantify that. I don’t have the numbers. But I imagine it would be more than a million people. I mean, we know that more than half a million people are arrested for marijuana activity each year. So if you think about the number of years that we’ve had prohibition on the books, it could be pretty impactful.

Biden said he’s going to have his administration review whether marijuana should be classified as a Schedule I substance. What are your thoughts on that?

I think the fact that he’s ordering a review of the scheduling of marijuana shows that he believes that it doesn’t belong in Schedule I. Schedule I is reserved for substances that have no medical value and high potential for abuse. I think, at this point, everyone recognizes that marijuana doesn’t fit there.

Biden, on the campaign trail, said that he wants marijuana to be put on Schedule II. [But] keeping marijuana on the schedule at all would be very detrimental. At the Drug Policy Alliance, we support the full descheduling of marijuana. And I hope that what we see is HHS and the DEA recommend full descheduling. We’ll see. I’m not very optimistic about that. But I think it’s the right move. Because a lot of the harms that we talk about—criminalization, immigration consequences, legal state programs not being able to operate—all of those issues stem from the fact that marijuana remains federally prohibited. So we really need to just take it out of the Controlled Substances Act to fully delete it.

How long do you think it might be until that scheduling review is complete, and we hear about the results?

It can take months. Typically, HHS has to do an eight-factor analysis. That’s usually with emerging substances. Because marijuana is a more familiar substance, and because it is clearly a priority for President Biden, that may speed up the timeline.

What does this pardon signal in terms of the possibility of marijuana being fully decriminalized?

Well, the Biden administration has not come out in support of fully decriminalizing marijuana. They’ve been reluctant to commit themselves to that. But I’m hopeful that this motivates Congress to pick up where Biden left off and pass a comprehensive marijuana legalization bill. The House has already done it twice with the Marijuana Opportunity Reinvestment and Expungement (MORE) Act. The Senate now has the CAOA [Cannabis Administration and Opportunity Act], which builds off of the MORE Act. That bill would fully deschedule marijuana. It would provide for broader resentencing than the Biden proclamation did. It would provide for federal and state level expungements. So I’m hoping that President Biden endorses and supports that legislation, and that Congress works to pass it.