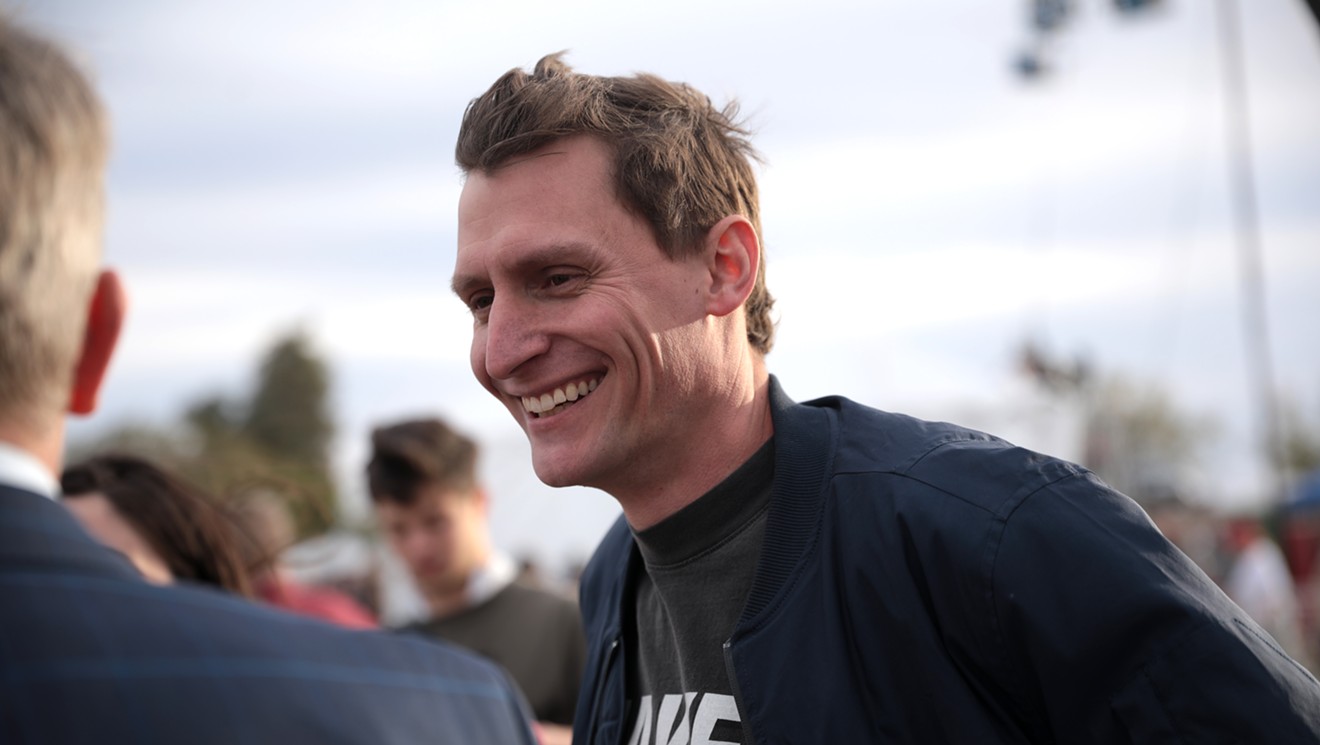 Blake Masters, Arizona’s Republican nominee for U.S. Senate, has a penchant for spouting provocative takes. But a new host of racist material advocating for his campaign has cropped up online and on the streets of Phoenix. It’s more controversial than his typical bombast — and he’s even raising money from some of it.

The material is a far cry from his maiden campaign ad released a year ago in which Masters appeared urbane.

“We’ve got to take care of each other,” Masters says in that ad as his three sons cavort in the Sonoran Desert brush. In the distance is the towering steel fence along Arizona’s border with Mexico.

In the new material, from supporters outside his campaign, Masters mocks Native Americans and appropriates Black culture. He also is backed by Jews for Blake Masters, a Twitter account with 145 followers, despite his antisemitic statements.

Masters bills himself as an altruistic champion of safety, prosperity, and freedom. But his campaign is tethered to racist campaign materials from alt-right trolls.

Last month, a one-minute clip of Masters rapping while wearing what was meant to resemble Native American war paint made its way to Twitter.

“I’ve got the war paint on, as you can see,” he rhymes over a superimposed beat in the video. “Who said what about cultural insensitivity?”

The footage in the video dates back to 2008 during his years as a student at Stanford University. At the time, Masters was a self-styled Libertarian who preached the gospel of open borders and belonged to a left-wing vegetarian co-op with socialist ideations. He has since about-faced, joining the Republican Party he once criticized amid an existential pivot away from the fiery populism that previously defined him.

A poorly photoshopped image of U.S. Senator Elizabeth Warren, a Democrat, wearing a traditional Native American war bonnet pops up on the screen as he raps that line.

The video closes with Trump saying, “Blake Masters has my complete and total endorsement.” Then a statistic flashes on the screen: “Mark Kelly votes 100% of the time with Joe Biden.”

The stat is wrong. According to pollster FiveThirtyEight, Kelly votes with Biden 94 percent of the time. Of the 48 Senate Democrats, 43 of them vote with Biden more often than Kelly. He’s one of the five Democratic senators least allegiant to Biden, in reality.

A spokesperson for Masters said the video didn’t come from them.

“This isn’t from the campaign,” spokesperson Katie Miller told New Times. She declined to answer any of our questions.

A spokesperson for U.S. Senator Mark Kelly, the Democrat Masters faces in November, declined to comment.

A “Blizzy 4 Sizzy” sign at 32nd Street and Bell Road in northeast Phoenix.

Spend any time paying attention to campaign signs filling roads in Phoenix and you might spot a flashy one featuring “www.blizzy4sizzy.com” in oversized rainbow-colored letters.

The signs depict Masters wearing a gold chain, sunglasses, and a flat-brim hat with the name “Khabib” on it. It’s a reference to Russian ultraconservative influencer Khabib Nurmagomedov.

No, “Blizzy” doesn’t allude to the slang term for a hollowed-out cigar full of weed, nor does it refer to the Atlanta rapper who was murdered in 2016.

The emergent “Blizzy 4 Sizzy” moniker is a play on “Blake for Senate,” evoking the “izz” affix popularized by Black rappers in the Bay Area in the 1990s.

That affix is a part of African-American Vernacular English and was born from the Harlem Renaissance in the early 1900s. In 1931, jazz legend Louis Armstrong talked about smoking “shuzzit,” slang for weed. The affix was further developed as poor, young Black girls improvised chants and nursery rhymes while jumping rope, with the -izz phraseology serving to add syllables to maintain the rhythm.

Snoop Dogg gave more popularity to the uniquely Black dialect around 2000, which he later said he heard from pimps and jive hustlers in the 1970s, with his classic catchphrase, “Fo shizzle, my nizzle.”

The signs supporting Masters haven’t gone unnoticed. Scott Neely, a Tempe Republican who recently ran for governor, cited one in a July tweet. Others on social media criticized the signs for appropriating Black culture.

The site says, “Blake Masters is running for U.S. Senate in Arizona. He is extraordinarily based and freedom-pilled.” That’s a reference to the alt-right meme “based and redpilled,” born out of the white supremacist hotbed 4Chan in 2013 and popularized in a Reddit forum called “The Red Pill,” which was for men who aspired to trick women into sex using psychological manipulation.

There is no other content or information on the website, save for the hashtag #OneFamilyOneIncome, a tagline for Republicans who want to see women quit working and resume homemaking, and a button to donate to Masters’ campaign.

Money collected through the site is facilitated by WinRed, a Republican fundraising platform. Masters has received more than $2 million in donations through WinRed this election cycle, according to data from the Federal Election Commission.

The Masters campaign declined to answer whether or not it created the site.


Phoenix-based Republican consultant Chuck Coughlin told New Times that it’s difficult for candidates to control their own narrative in the heat of campaigns.

“The only way a candidate can control that narrative is to not accept money. If you are really opposed to the views expressed on the website, you wouldn’t cash the checks,” Coughlin said.

Masters’ antisemitic misadventures date back further than the war paint video. In a 2006 essay, Masters included a “poignant quotation” from Hermann Göring, a Nazi leader and war criminal, to argue against American intervention overseas.

Earlier this month, Masters was caught lying about not knowing his antisemitic backer, Andrew Torba. He was endorsed by neo-Nazi Andrew Anglin, although he rejected that endorsement.

Masters is also supported by Jews for Blake, which on its face seems to be a parody. It isn’t.

The group’s website claims that “Blake Masters is a friend of the Jewish people,” and “the Jewish people are tired of being used and having our history be used by political hacks to label their opponents as antisemitic.”

Jews for Blake is not associated with the Masters campaign, but Masters follows the group on Twitter.

“The Jewish community of Arizona will judge Blake Masters and his campaign by his words, actions, and the relations he keeps,” Paul Rockower, executive director of the Jewish Community Relations Council of Greater Phoenix, told New Times.

“It will not be remotely swayed by astroturf websites or faux Twitter accounts that hold no connection to our community,” Rockower continued. “We are still waiting for any sort of serious denunciation of antisemitism and Holocaust denial by Blake Masters, and remain deeply disappointed that such seemingly easy steps seem beyond him.”

Jews for Blake is not associated with the Masters campaign, but Masters is one of its 145 followers on Twitter.

An August 10 poll of likely voters from the nonpartisan Center Street PAC shows Kelly has a 14-point advantage over Masters.

About half of Arizona voters view Kelly favorably, while less than one-third feel that way about Masters. Only 13 percent of voters polled view Masters “very favorably.”

Meanwhile, half of voters have an unfavorable view of Masters versus 38 percent for Kelly.

“We’ve said it before, and we’ll say it again: Once voters get to know these MAGA candidates, they don’t like them,” Jacob Perry, Center Street’s co-founder, said in a prepared statement. “Once more Arizona voters get to know Masters and see what an extremist he is, we think Arizona will go blue, in this race at least.”