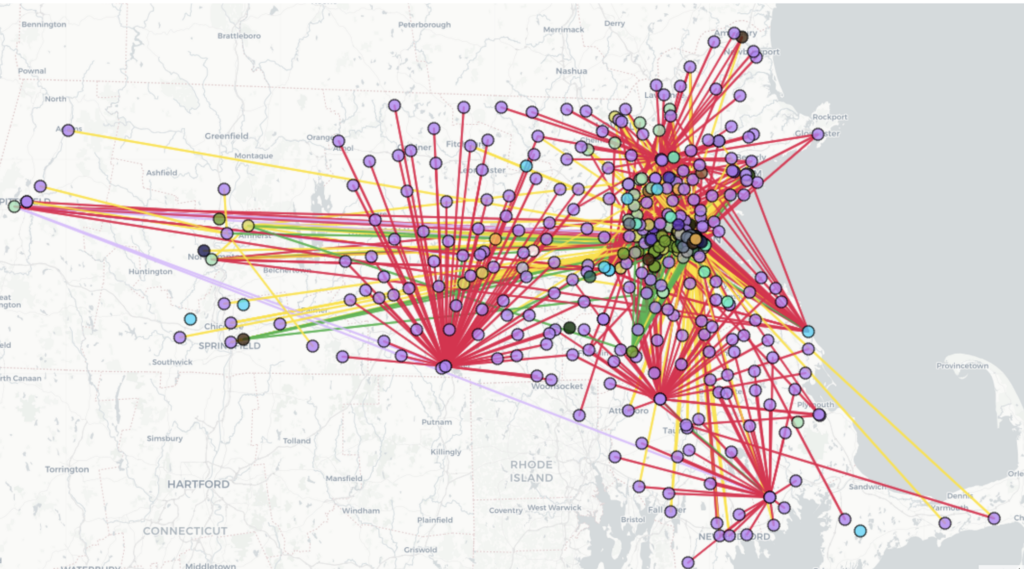 These are a few of the locations on a dense interactive map of “Zionist leaders and powerhouse NGOs” in Massachusetts created by an activist group that says it aims to expose “local institutional support for the colonization of Palestine” and reveal how support for Zionist causes is a nexus point for various “other harms” in society, ranging from gentrification to the prison-industrial complex to ableism.

The Mapping Project, a Boston-area pro-Palestinian activist collective aligned with the local Boycott, Divestment and Sanctions movement targeting Israel, is using its map (which includes addresses of the organizations and names of their staffers) to draw literal links between dozens of area Jewish groups, universities, foundations, police departments and other organizations.

The group says its goal is to demonstrate that “institutional support for the colonization of Palestine is structurally tied to policing and systemic white supremacy here where we live, and to US imperialist projects in other countries.”

Jewish groups in the state say The Mapping Project’s efforts amount to little more than an attempt to catalogue and intimidate area Jews.

“They are choosing, in their desire to be intersectional, to essentially point the finger at the Jewish communal infrastructure of Greater Boston as responsible for every evil under the sun that they can think of,” Jeremy Burton, executive director of the Jewish Community Relations Council of Greater Boston, told JTA. “They make no bones about it.”

Burton said he was especially concerned that the map was amplified and praised on Twitter by the nonprofit activist group Massachusetts Peace Action, which he said has a lot of sway in progressive circles and often sits down with local politicians.

The project’s map includes the addresses of most of the major Jewish-affiliated organizations and donor funds in the state: political groups spanning the aisle, from the American Israel Public Affairs Committee and the Zionist Organization of America to J Street, along with the nonpartisan Anti-Defamation League; charities like the Combined Jewish Philanthropies of Greater Boston (CJP) and the Jewish Teen Foundation of Greater Boston; private foundations headed up by Jews; religious organizations including the Synagogue Council of Massachusetts; and academic research centers like the Harvard Center for Jewish Studies.

Sometimes its links are accompanied by dollar amounts of financial support drawn from tax forms. Sometimes they’re simply demonstrating agency partnerships, or what the group says is behavior “normalizing” Israel. (The Jewish Journal, a Jewish Telegraphic Agency syndication partner based in Salem, is one of the links.)

“Our goal in pursuing this collective mapping was to reveal the local entities and networks that enact devastation, so we can dismantle them,” the group, which does not list its members, said in a statement on its website. “Every entity has an address, every network can be disrupted.” 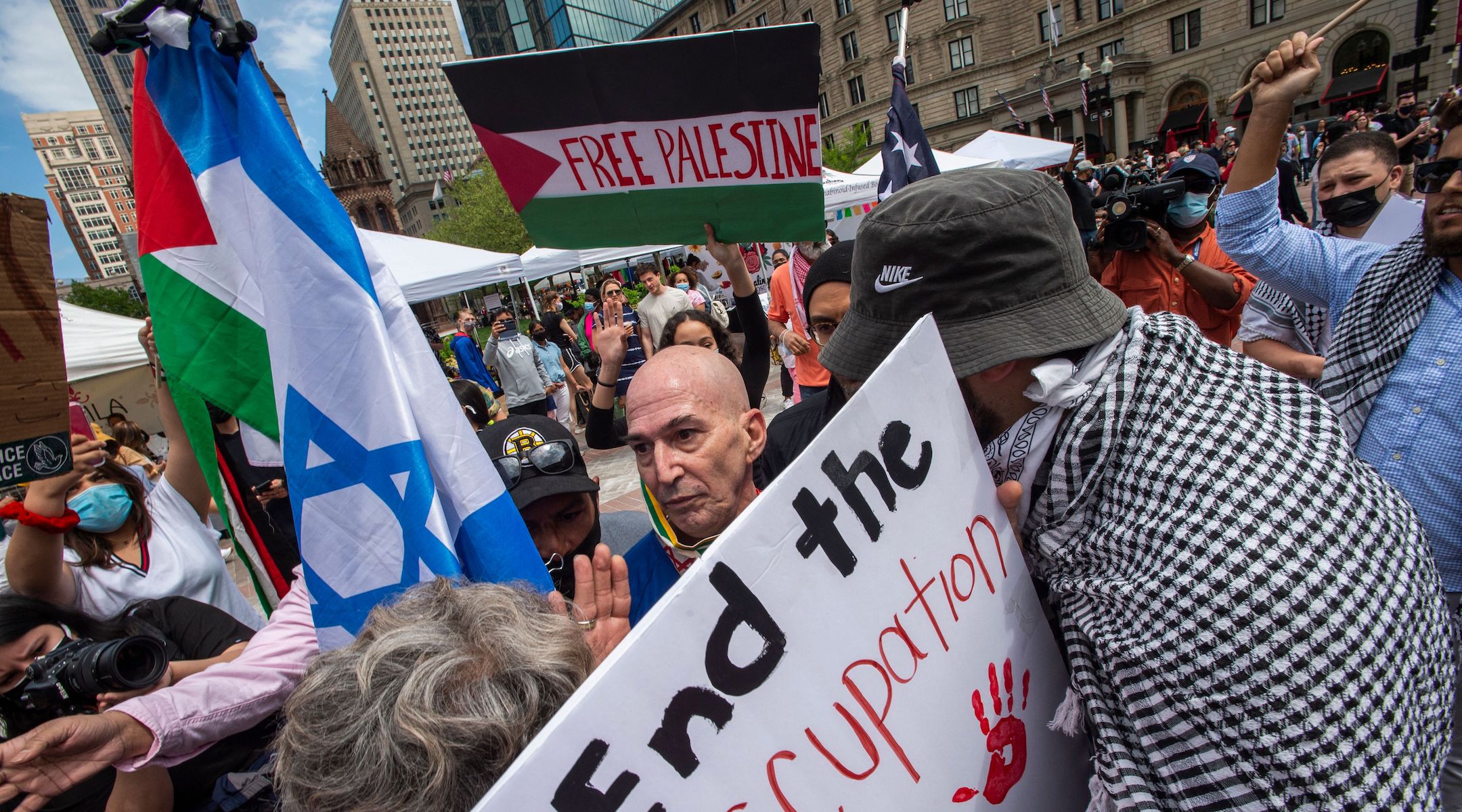 A man who claims to have been a member of the Israeli army for 32 years is surrounded by pro-Palestinian supporters who shout at him and eventually steal his flag during a rally in support of Palestinian rights in Copley Square in Boston, Massachusetts, following a flare-up of violence in Israel and Gaza, May 15, 2021. (Joseph Prezioso/AFP via Getty Images)

The map was posted late Friday, shortly before Shabbat, and became a topic of concern among Jewish groups coming back online late Monday after the Shavuot holiday.

In a joint statement, Boston’s communal Jewish organizations say that the map and its creators’ stated goal amount to little more than an effort to “dismantle” the city’s organized Jewish community writ large.

“As a Jewish community, and one that has made allyship and outreach the cornerstones of our work, we condemn this demonization of the Boston Jewish community and attack on its relationship with others,” CJP, the New England ADL and the Boston JCRC said Wednesday. “This is no thinly veiled attempt to target the Jewish community — it is an explicit one that is keeping lists and naming names.”

The map was also condemned by Lior Haiat, spokesperson for Israel’s Foreign Ministry, who tweeted that it “is reminiscent of a dangerous antisemitic pattern of activity known from antiquity through the horrors of the 20th century: a pattern which has led to violence against Jews and their institutions.”

The Mapping Project did not return multiple requests from JTA for comment.

In an interview with the pro-Palestinian website Mondoweiss, the group identified certain Jewish organizations like the ADL and CJP as “super-oppressors,” saying they “have tremendous influence” by linking the foundational and nonprofit world with “overtly repressive forces” like police and weapons developers.

The joint statement from the CJP, ADL and JCRC said the map “draws on age-old antisemitic tropes that are all too clear to our community: Jewish wealth, control and conspiracies.”

Much of the Mapping Project’s focus is in line with broader trends in anti-Zionist discussions. The focus on police departments follows a recent claim by some progressives that U.S. police have picked up abusive tactics during fact-finding trips to Israel sponsored by Jewish groups  — an allegation denied by the groups that run the trips and many of the officials who took part. 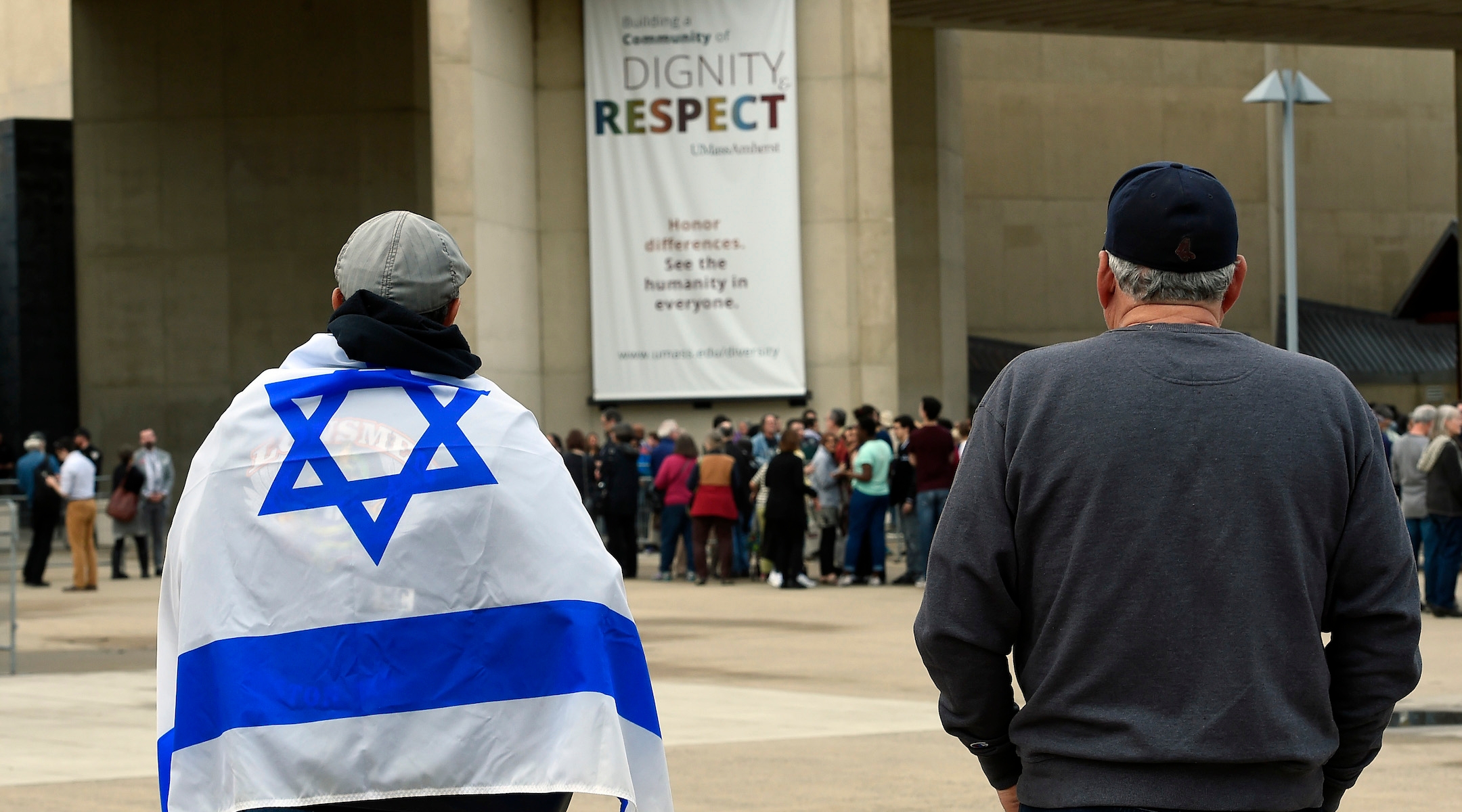 Pro-Israel protesters watch event attendees outside a panel on free speech and the Israeli-Palestinian conflict, featuring critics of Israel, at the University of Massachusetts-Amherst, May 4, 2019. The Mapping Project says UMass Amherst supports “ethnic cleansing and colonization of Palestine…through its campus Hillel, pro-Israel course listings, statements from administration, and by hosting Israel-linked weapons manufacturers at its career fairs.” (Christopher Evans/MediaNews Group/Boston Herald via Getty Images)

The project classifies J Street, a liberal political advocacy group that calls for a two-state solution, as one that “stops short of challenging the fundamentally ethnocratic and settler colonial foundations of the Zionist state.” That follows a recent trend of pro-Palestinian groups shunning J Street, which has in the past comfortably occupied a space among Jewish progressives. Earlier this year in the Boston area, a student-led pro-Palestinian campaign at Tufts University also urged students not to join the campus J Street chapter, citing similar objections. (The BDS movement has also made inroads at another prominent Boston-area university, as Harvard’s student paper recently endorsed the cause.)

Similarly, the group’s focus on the ADL as an organization that causes “harm” is in line with a recent trend of progressive groups shunning the civil rights group that tends to lean liberal on domestic affairs. The ADL has responded in kind, most recently with CEO Jonathan Greenblatt equating left-wing anti-Zionism to right-wing antisemitism.

Greenblatt’s comments were criticized by many Jewish liberals and progressives at the time, but his own fierce denunciation of the Mapping Project put him on the same side as progressive Jewish leaders including T’ruah founder Rabbi Jill Jacobs, who also condemned the map.

“You can protest Jewish organizational policies/positions have [sic] vis-a-vis Israel all you want (or even boycott Israel), but once you call for dismantling the basic Jewish communal infrastructure, you’ve crossed the line to antisemitism,” Jacobs tweeted.

“We won’t be intimidated by @BDSBoston’s dangerous call for action against Boston’s Jewish community or their attempt to target Jewish schools, institutions, and organizations, including @ADL,” Greenblatt tweeted in response to the map of Jewish organizations, amplifying a statement from the ADL’s New England branch.

Burton says The Mapping Project, which published the names of even junior staffers at organizations like the JCRC, is inviting violence and physical intimidation against Jews.

“I have no question that, in this particular case, these radical anti-Zionist activists are deliberately choosing to put a target on the bodies of the Jewish community in Boston,” he said.

The post Boston Jews say a pro-Palestinian group’s map of local ‘Zionist leaders and powerhouse NGOs’ is a guide to antisemitism appeared first on The Forward.