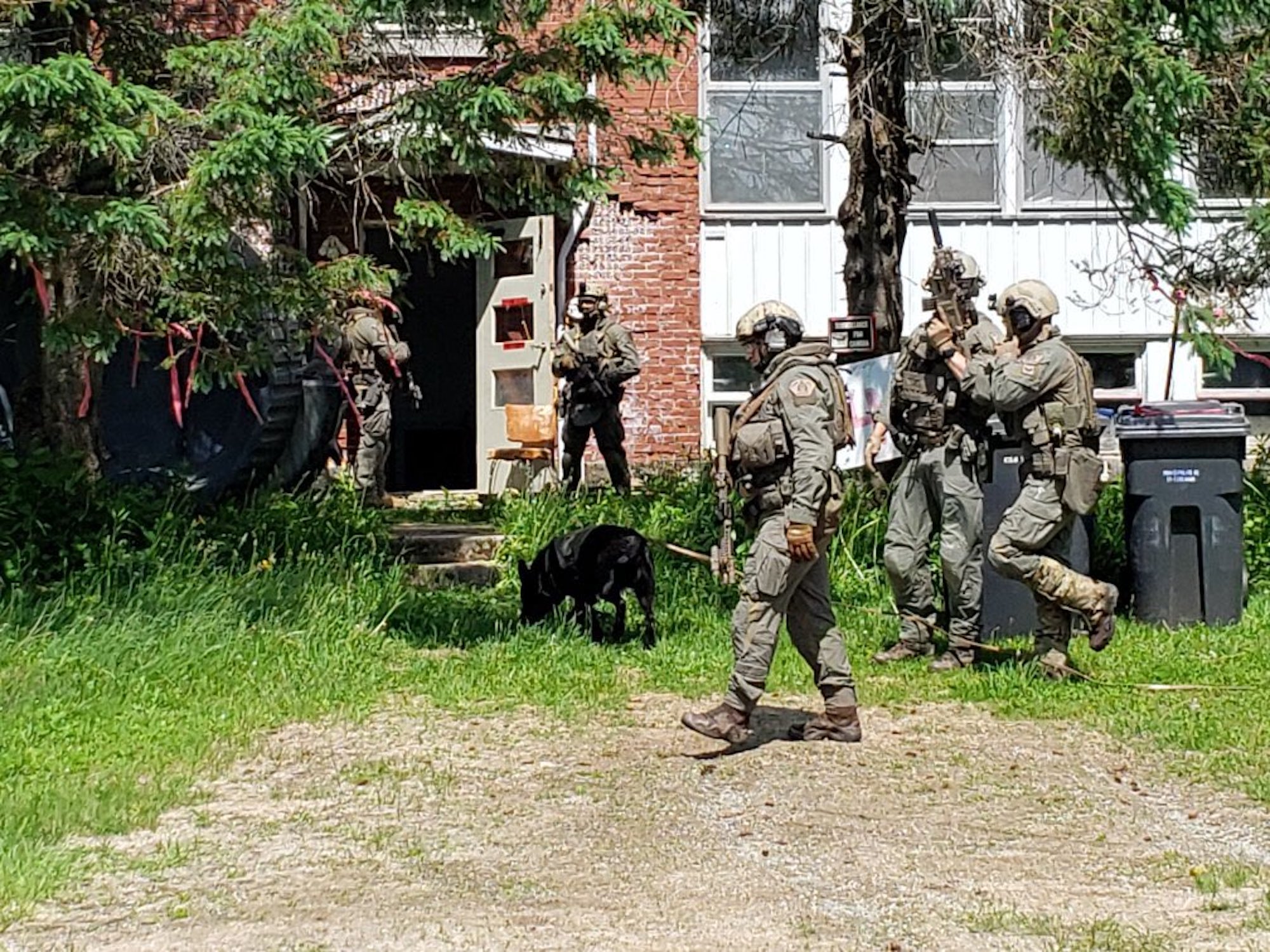 Canadian police raided two properties in Quebec they suspect of being connected to members of the neo-Nazi terrorist organization, Atomwaffen Division.

RCMP Cpl. Charles Poirier described the raids to VICE World News as a “national security operation” involving several individuals suspected to be connected to the Atomwaffen Division. Two search warrants have been executed and multiple people are being investigated in the operation.

“This is an investigation that started in 2020, so we’ve been working on it for quite some time,” said Poirier. "We have roughly 60 national security investigators on scene, as well as our emergency response team, dog masters, and other support personnel.”

A tweet sent out by the RCMP shows the officers dressed in tactical gear, some of which are carrying long rifles, as they carry out the search warrant.

“Obviously because of the nature of the group and what they’ve done in the past, we assessed the risk and accordingly we used our emergency response team, but there’s no risk to the public,” he added.

Atomwaffen Division is a neo-Nazi accelerationist group fixated on creating violence and chaos in the hopes of destabilizing society to hasten a collapse and build a white ethnostate from the ashes. The group has been connected to multiple murders since its formation and was extremely influential in a violent subsect of the extreme-right ecosystem. While the group’s current state is weaker than its late 2010s heights, members of the group are still involved in a network of other groups with similar ideologies and goals—often referred to as the Iron March Legacy or Skullmask network, a neo-Nazi forum they were formed on or the mask Atomwaffen members often wore in propaganda videos and photos.

unsurprising. We know there are people attracted to and involved in that network in Canada,” said Elizabeth Simons, the deputy director for the Canadian Anti-Hate Network, an organizaton that monitors far-right groups and actors in Canada. “We hope that more information is released so that communities can be aware and stay safe.

Atomwaffen was designated a terrorist organization in Canada last year alongside a similar accelerationist neo-Nazi organizaition The Base and other groups.

The warrants were executed at a home near a church in the rural town of Saint-Ferdinand and another in an apartment building in Plessisville. The two towns are only a 15-minute drive from each other and both are situated about an hour outside of Quebec City.

In May, Seth Bertrand, a 19-year-old Windsor, Ontario, man accused of attacking a trans support network was charged for allegedly joining one of the neo-Nazi group’s offshoots. RCMP said in a press release the man “filed an online application to join a listed terrorist entity, the Atomwaffen Division (also known as National Socialist Order), and offered his skills and commitment to do things for this listed terrorist entity.”

Before the terrorism charges, Bertrand was charged with three counts of mischief for allegedly throwing a brake rotor through the windows of a Windsor trans support center and tagging the walls with slurs and a swastika.

"I can confirm that both incidents are linked because it’s the same organization,” said Poirier.

In March, the Ottawa, Ontario, home of Patrick Gordon MacDonald, an influential neo-Nazi propagandist connected to Atomwaffen was raided by police. Authorities seized multiple computers but no charges against MacDonald have yet to be laid.

No arrests have been made in regards to the Quebec search warrants, however, Poirier says that depending on what is found that is certainly a possibility.