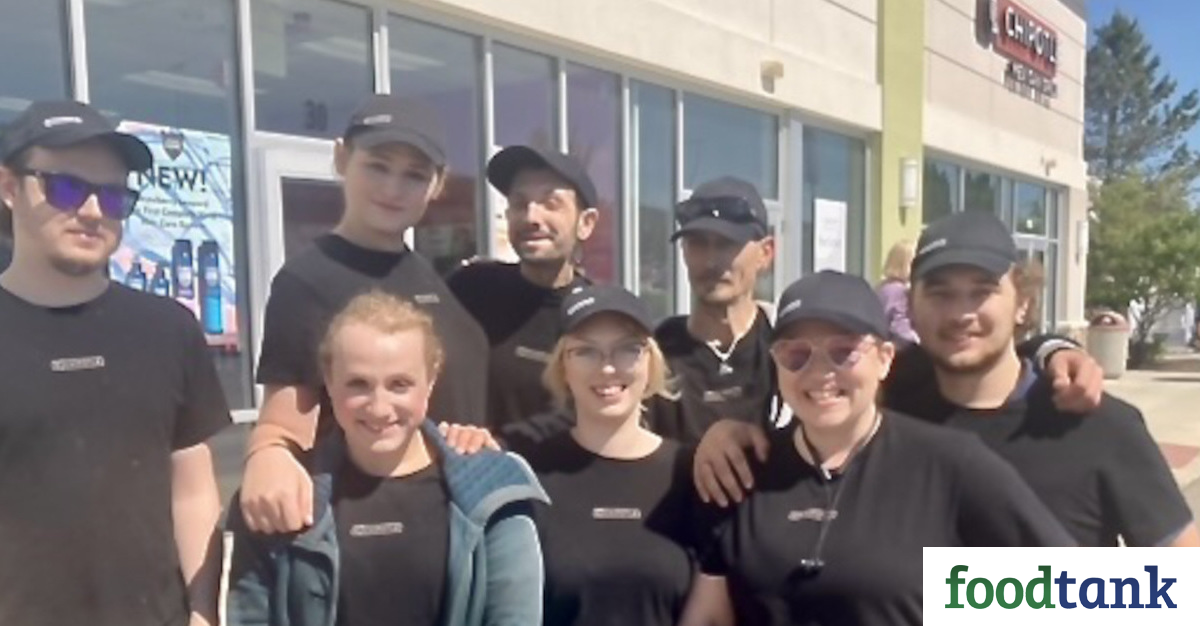 Chipotle Mexican Grill employees in Augusta, Maine became the first restaurant in the chain to file a petition to unionize. The employees, seeking to unionize as Chipotle United, are fighting for the health and safety of their crew and community.

“Opportunities for slips, trips, and falls–the three top injuries in food service–surrounded us every day as we raced around each other to get our job done,” Brandi McNease, an organizer for Chipotle United, tells Food Tank. “Operating a cheese shredder without an emergency off switch and working through gas leaks, unaware until flames started shooting, are a couple of the issues most people will generally understand to be just plain unsafe.”

Chipotle employees in Augusta, Maine recently staged a walk-out on in response to unsafe, unsanitary labor conditions. Chronic understaffing, crumbling infrastructure, injuries, and inadequate training are among the violations McNease and her colleagues aim to address by unionizing.

Unsanitary conditions, combined with under-trained and overworked staff, are creating community public health concerns. “Cross-contamination was happening as gloved hands went into a pan of cheese and then into a brand new batch of lettuce that we would continue to serve for the rest of the day,” McNease says.

Because of inadequate training, McNease notes, Chipotle employees could not properly serve guests with special dietary needs. “We used to be the safest place to eat in Augusta for vegan and gluten-free diets, and I don’t think that our customers understood how that had changed. We weren’t the Chipotle our loyal customers knew and loved.”

In December 2019, the National Labor Relations Board filed a complaint against Chipotle Mexican Grill in Manhattan after a manager threatened to fire employees for trying to organize a union. The complaint alleges that Manhattan Chipotle managers intimidated employees by threatening physical violence if they engaged in union activities and offered promotions to employees with information about union organizing efforts.

In April 2021, New York City sued Chipotle Mexican Grill for “hundreds of thousands of violations of a fair scheduling law at several dozen stores,” according to a New York Times report. The suit states that employees’ schedules changed without adequate notice or extra pay, employees were required to work consecutive shifts without sufficient time off or overtime pay, and new employees were offered additional shifts over existing employees.

McNease tells Food Tank, “we do want everyone to know that [Augusta’s] Chipotle Mexican Grill is engaging in union-busting activities as they are in Manhattan, and we’re ready for the fight.”

Chipotle United’s unionizing efforts contribute to a series of national fast-food worker organizing movements. McNease says that Chipotle United was inspired by Starbucks Workers United, which is unionizing in over 170 stores and has grown a national network of union supporters. “So far, we’ve seen an incredible response from other industry workers who are tired of being exploited to maintain profits while their health and safety are being disregarded,” McNease tells Food Tank.

“We’ve seen this evolution of the restaurant industry post-pandemic after many businesses shut down,” Manuel Villanueva, Regional Director at the Restaurant Opportunities Center of Los Angeles, tells Food Tank. Villanueva mentions that restaurant work became a high-risk job during COVID-19, citing “violence in the workplace from customers and staff, and life and death situations with the pandemic.”

Chipotle provides good benefits, Villanueva tells Food Tank, “somewhat above the average paying rates.” But the issues within the industry itself, such as sexual harassment, retaliation for unionizing, and favoritism for employees that don’t speak up, “things that are legal and not,” Villanueva says, persist.

Articles like the one you just read are made possible through the generosity of Food Tank members. Can we please count on you to be part of our growing movement? Become a member today by clicking here.