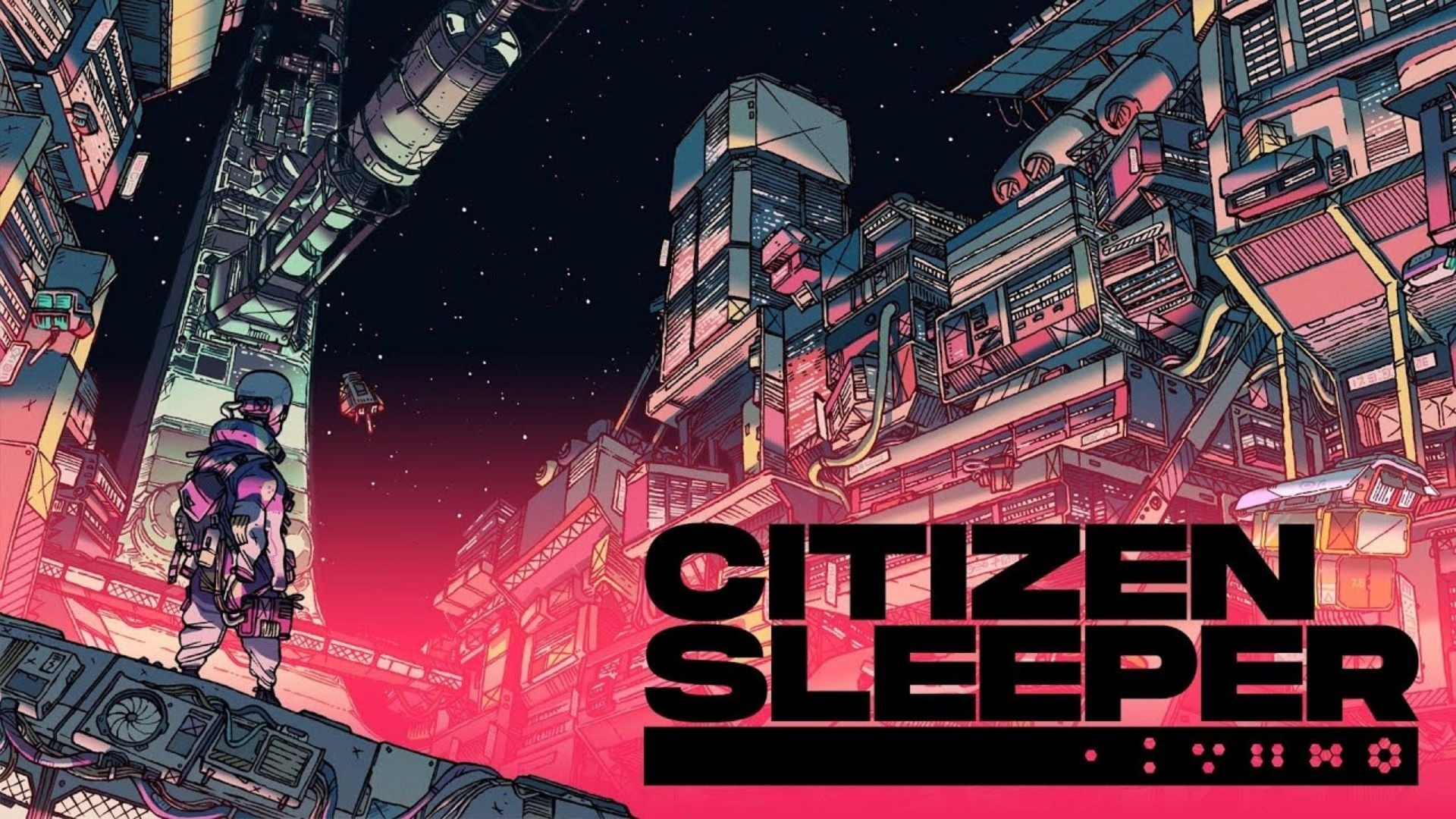 The Sleeper wakes at a remove. Their body, slow to act and slower to provide sensory feedback, feels miles away. Even this body, of metal and synthweave muscle, feels like as much of a memory as their human skin. This means that they are sick—that someday soon, they could die. They focus their attention away from the sea of digital threads before them, and onto their synthmeat and the muted way it feels the world. Their mind reaches, tendril-like through muscle, and nerves, and synthetic veins. The feeling comes back in a wave, one that almost crushed them the first time it broke against them.

They panic, as they often do in the mornings, but their breathing does not accelerate beyond standard operating values. They wish it did. They slip on their clothes, out of habit more than anything else (no one here knows enough Sleepers to know if it would be strange to see their synthetic bodies exposed, like real flesh), and they go to work—feeling worse than yesterday.

Citizen Sleeper, a new narrative RPG developed by Jump Over The Age and published by Fellow Traveler, follows the journey of the Sleeper as they struggle to find a sense of self, community, and a way to survive on the harsh, but almost beautiful, space station known as the Eye. Sleepers are a copy of a person’s consciousness, sold into servitude to a corporation so the “original” person can live a happier life. It is a cruel, brutal practice. The game gives players a unique set of tools to help figure who their particular Sleeper is. Citizen Sleeper revolves around a tabletop role playing game-esque dice allocation system. Every time the Sleeper wakes up, they receive a collection of dice which they can use to complete various tasks, moving clocks forward until they complete at which point you finish your objective. A six guarantees a full success, a five allows for a full success or a neutral outcome. 2s and 3s can result in negative, positive, or neutral outcomes. 1s guarantee you a negative or neutral outcome, depending on your luck.

This system is combined with a more traditional decision making system, familiar to anyone who has played an RPG in recent years, but most reminiscent of old-school character RPGs, Point and Click adventure games, and modern classics like Disco Elysium. You will progress through dialogue trees until reaching an obvious branch point, at which you will make a decision that affects the game’s narrative from that moment forward—and that sense of narrative control is something Citizen Sleeper excels at through its branching narratives. 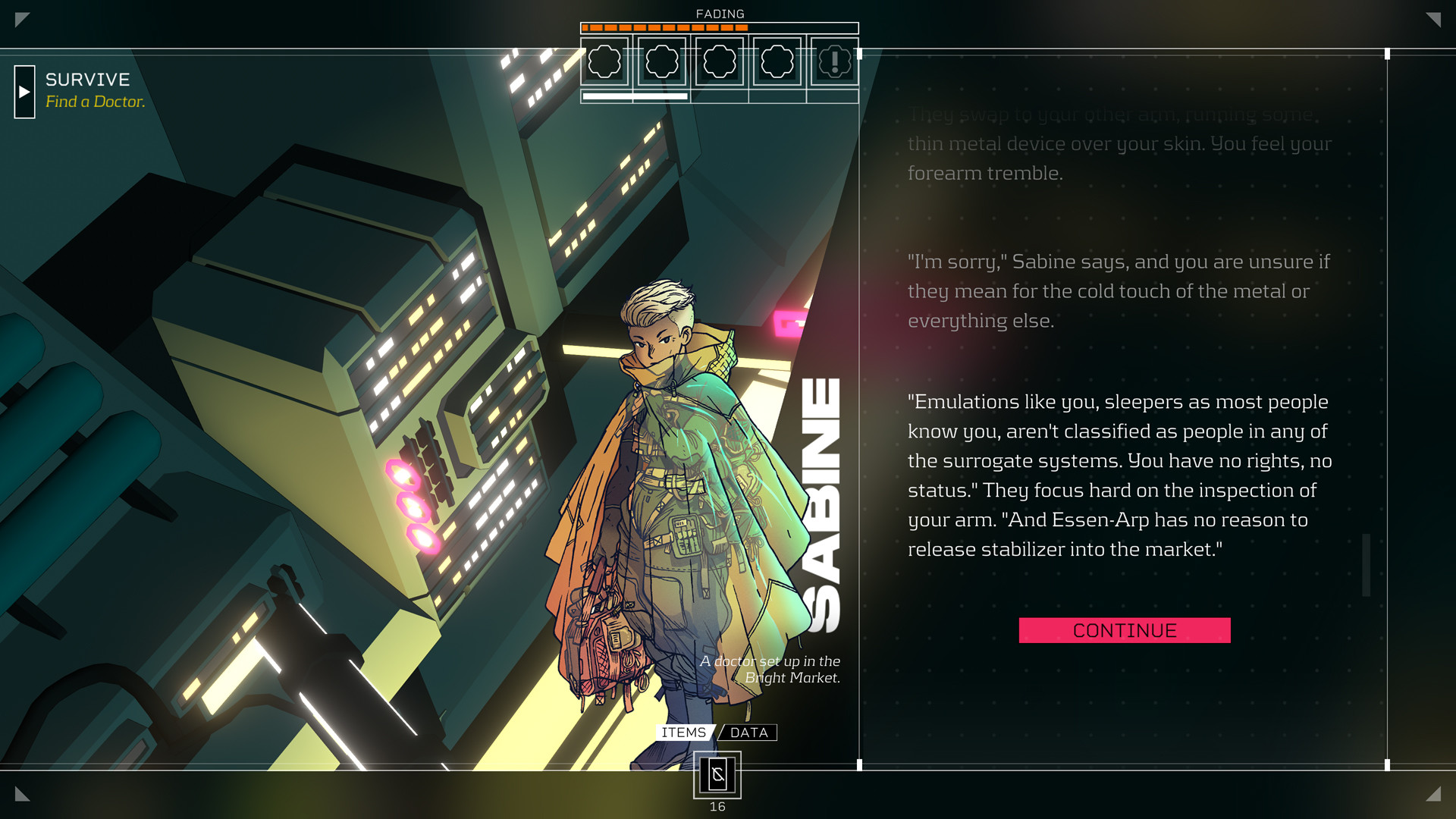 Citizen Sleeper feels as much like a survival game as it does a visual novel. Everything on the Eye, a massive space station which experienced a semi-successful socialist revolution decades before your arrival there, has a cost, from the food you eat to keep your synthetic body fueled, to your room and board. It is a war of attrition against the weight of poverty and artificial scarcity. Above all, the most immediate existential precarity you face is your need for stabilizer.

Your synthetic body was born to exist under the thumb of a major corporation—its final fallback in the unlikely case of your escape is a brutal program of planned decay. The human mind, unfamiliar with a synthetic body, will naturally attempt to reject it in the same way it does a transplanted organ. The only way to prevent this process is to take stabilizer, which reminds your consciousness of its connection to this particular body. If you don’t take your stabilizer, your body will decay over time. As your condition drops, and you run out of food, you will receive fewer dice to start each day with, which means fewer opportunities to make the money you need to alleviate that failing condition. It is a brutal cycle.

In addition to the many jobs you do around the Eye, ranging from bartending and farming, to shipbuilding and gang enforcement, you can devote some of your dice to the game’s hacking system. Various nodes throughout the Eye are vulnerable but, unlike the standard actions which generally have multiple outcomes dependent on which die you use, the hacking system requires specific rolls. If a hack says it wants a two, you can’t give it anything else. These nodes provide information, which can be traded for money or bartered for items at a handful of different locations, and acts as a much safer way of getting money when you roll low.

In Citizen Sleeper, you can become totally proficient at everything you do. It takes an entire run of the game, but you can achieve a +2 in every stat, turning every two into a four and so on and so forth. This means that by the end of your playthrough, even on your worst days you can be moderately successful. That doesn’t stop them from being your worst days, though. 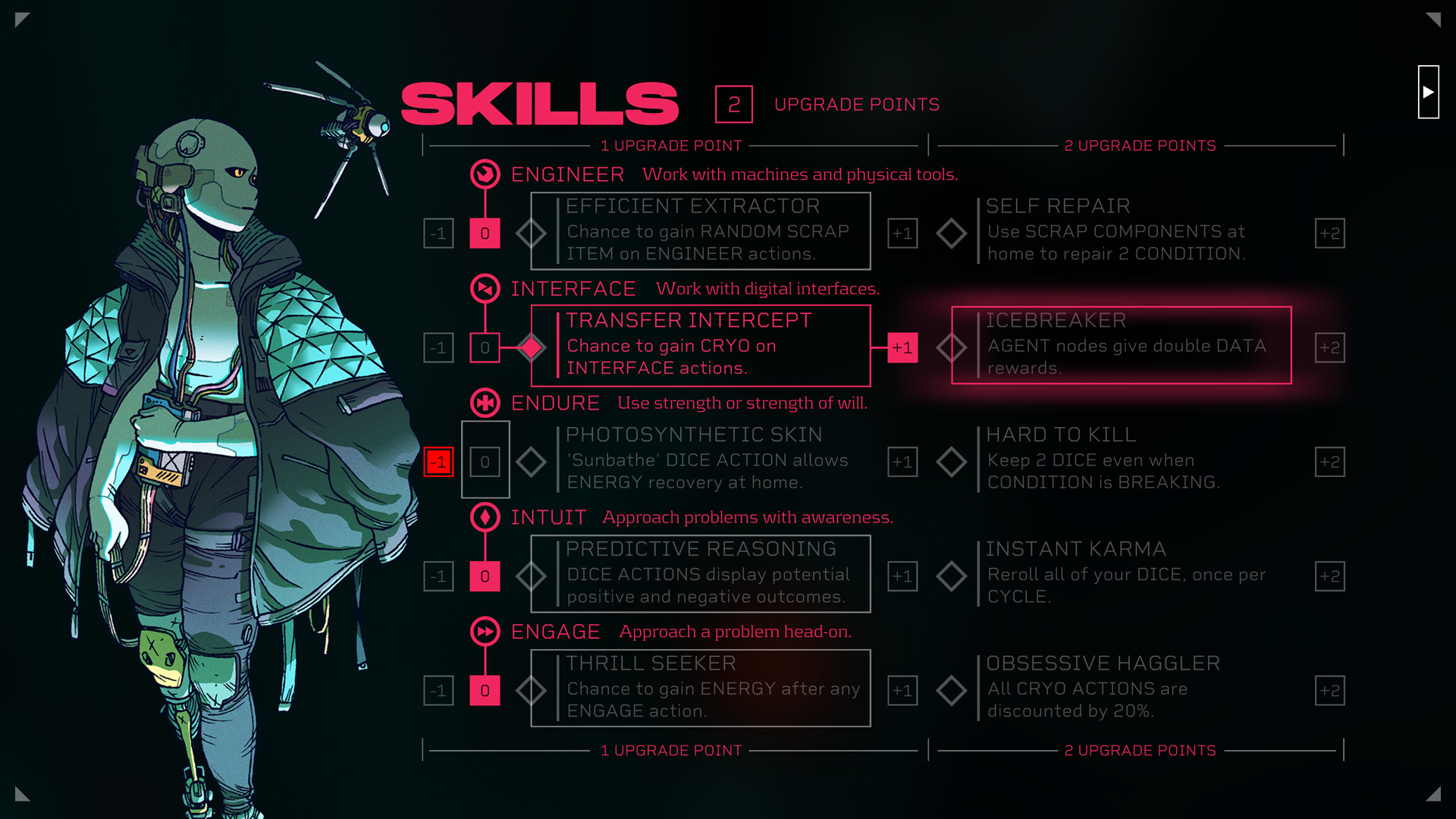 Citizen Sleeper’s skill system is simple, but extremely effective. Screenshot by Jump Over The Age.

The reality is that some days will just be better than others. You will wake up, with five perfect dice, and you will do good work. You will make the money you need to pay for dinner, perhaps you’ll even get to save up a bit for your next dose of stabilizer. The next day, however, will not be so kind. You will roll an assortment of ones, twos, and a single three. You eek out what credits you can by hacking nodes from your apartment (you’re too tired to get up and do much else), and you do a single shift at the bar (it’s what you’re best at these days). You make almost enough to buy dinner.

You undo the good work of yesterday, and eat your dinner in a quiet corner of the bar. You can feel the weight of your own organs—alien, underneath the synthetic skin—and muscle and bone. You know this means that you are getting sicker. Maybe the next day will be gentler, you hope. You know it won’t.

You will slowly decay until, through something that feels like a miracle, you have enough money for a full dose of stabilizer. You will take the injection, and through a science that you do not understand, your body will feel like your own again.

This sense of ownership over your body is the product of the game’s prose, which is arguably some of the best in all of video games and is unflinchingly material. It is grounded in the sensory experience of the Sleeper above all else. It is all taste and smell and other senses that those of us in bodies made of flesh and bone have no reference for:

“You take a sip of the girolle. The earthy fungal tones fill your senses, almost blocking out sight and sound, like diving headfirst into a bog. You may not be able to get drunk, but this connection to something grown, something fermented, something old, feels good.”

It is the strength of the Sleeper as both a character and a narrative device. Their semi-virtual existence allows for even the vague networks of the Eye to feel physical and oddly intimate. To hack a node you have to move your consciousness to that part of the ship, like a body you maintain through diligent work.

It is this extremely intimate writing which gestures at the quiet answer to one of Citizen Sleeper’s core questions: What is the Self?

This is not, by any means, a novel question for science fiction. It is perhaps the fundamental question of a large portion of science fiction stories. However, Citizen Sleeper approaches this question with an efficiency and grace that I’ve rarely encountered before. 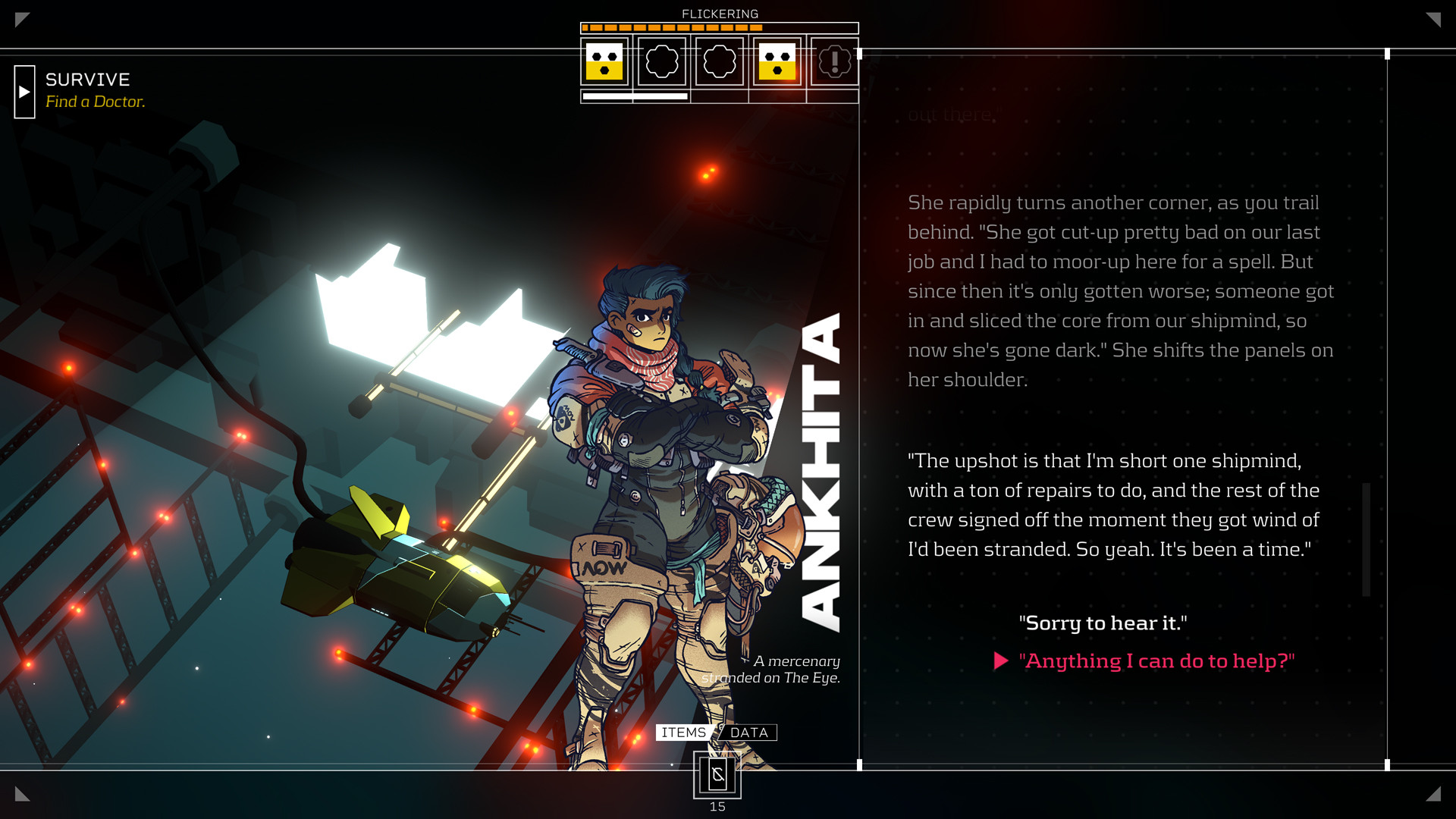 The Sleeper retains some of the memories of their original self, but finds their new bodies to be almost alien. Sleeper chassis are designed to function like people, in all of their sensory depth and horror, because anything else would produce too much strain on the consciousnesses which have been forced into these bodies. In this way, Citizen Sleeper recognizes the body, or something material, as the prerequisite condition for a human-like consciousness. We are not merely the inhabitants of our bodies, but the direct products of them.

Citizen Sleeper could have, very easily, adopted the easiest transhumanist answers—that our senses of self are more than our bodies and that, in an ideal world, we would be able to let our consciousness drift from body to body, or that we could reject material bodies altogether. It even offers it to the player directly at several points through the game’s many narratives and endstates, four of which I saw through to the end.

Those aforementioned endstates are heavily determined by your previous actions throughout the game’s dialogue tree based decision making. One in particular, which began by working in a ship repairyard with a scrappy kid and a put-upon engineer, focused on a mercenary who I had met in a totally different plot thread asking for their ship to be repaired. This mercenary had previously killed someone in front of me because I made a stupid choice and didn’t step in and, wracked with guilt and fury, refused to speak to me again. When she arrived in the yard, part of me was happy. I had built her ship months prior, and knew it well. I could’ve stopped her from killing that person if I’d acted differently in the moment. I could’ve joined her in leaving The Eye. I didn’t though. I failed to act when I should have, and I stayed. I chose the Eye over any other future, because I’d fallen in love with it over the course of my eight hour run. And because I felt like I owed the place something.

Citizen Sleeper is at its best in the quiet moments. Sitting at a food stall in the street, sharing stories with a man who loves cooking mushrooms for a lonely machine. The moments after your shift at the bar, where the woman who runs the place has decided to, ambitiously and foolishly, attempt to build her own still. The day you spend babysitting a child, while her father toils away on a ship that part of you knows will betray him. It is these moments where Citizen Sleeper makes its firmest case that, in spite of everything, living until the next day is worth it for the Sleeper. 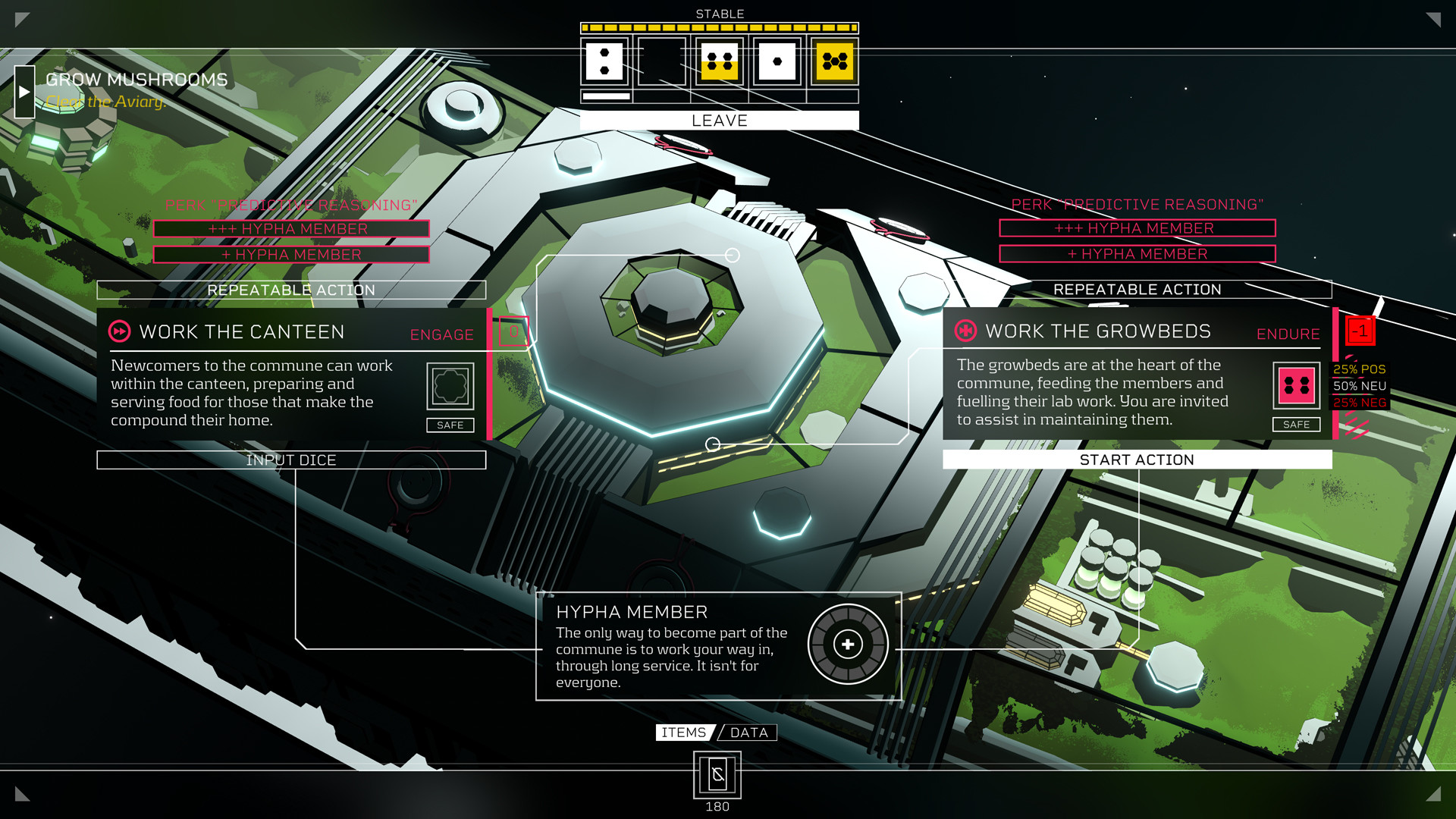 At the end of the game, I was offered a life without my body. I could become a consciousness, connected and beautiful, in a sea of data and biology—a self, distributed across mycelium and silicon and the skin of new animals. I could abandon the thing that breaks, that wears, that I was sold into by a ghost of me that I never met. I could walk away from the questions of chronic illness and identity, and I could become something new. And I said no.

I chose the body that bleeds, and bends, and cares—because it was that body which bore this me. It is the body that has learned the contours of the Lowend, the Eye’s most dense, and lovely, and reviled district, in all of its terrible grace. It is the body that knows the taste of earth and loam, and cradles the stories those tastes carried in its throat. It is the body that, workmanlike, has built ships and stills and a small farm (forgotten) in a little corner of a thought-dead city.

I chose a terrible, broken machine foisted upon me by a world that couldn’t care less about people like me. Anything else would be easier, and worse.