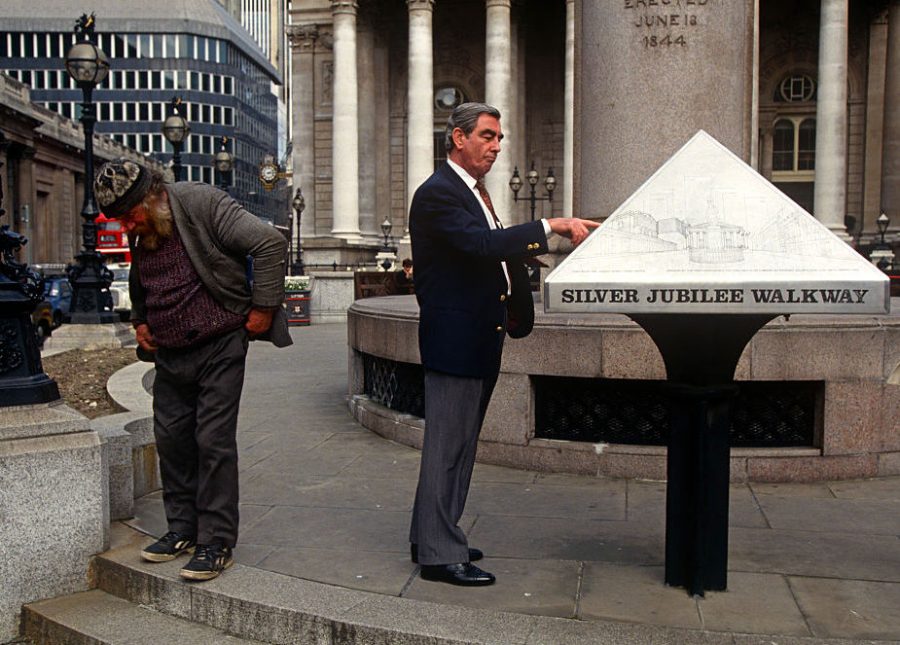 Claims That Capitalism Is Eradicating Global Poverty Are Wildly Misleading

Boosters of the capitalist system love pointing to statistics suggesting stunning progress in eradicating global poverty. But those metrics set the bar pathetically low — and don’t account for the obscene explosion in global inequality.

Fans of our current global economic order often justify it by claims of great progress in lifting people out of extreme poverty. Rarely do they cite statistics on inequality, such as comparing the slice of the “world pie” that goes to the rich versus that which goes to the poor. Little wonder as that picture is much grimmer, undermining their much-touted triumphant “progress.” Here are 2021’s global pie slices, according to World Inequality Lab data:

The top-skew is so severe that half the pie gets gobbled up by the top 10 percent. That resource-blessed group earns over $53,300 annually, and includes me and likely many of you. Meanwhile the poorest half of humanity nets 8.5 percent, and the bottom decile only 0.1 percent. The bottom decile earns an average of $289 annually, or about 79 cents a day. That’s 436 times less than the average top-deciler, who earns an average of $126,000, or $345 a day. (For rank-anxious overachievers, top 5 percent and 1 percent thresholds are $81,700 and $181,000 respectively.)

Global inequality scholar Branko Milanović attributes 80 percent of individual income variation to between-country factors, a geeky way of saying that your earnings aren’t mainly about effort or “merit” or productivity. They’re influenced primarily by the luck of belonging to a historically advantaged group residing in a wealthy nation — one where economic opportunities are built on a litany of historic injustices, from slavery and genocide to ecological destruction. The United States houses two hundred million global top-decilers and 33 million (half of all) global 1-percenters.

But financial-resource luck falls off quickly outside rich nations. Max Rosner of Our World in Data classifies only 15 percent of humans as “unpoor.” The other 85 percent make under $30 a day, a typical rich nation poverty line.

To grasp how disingenuous it is to frame the debate in terms of the “extreme poverty line,” consider that the commonly used cutoff of $1.90 per day only comes out to $694 per year — which is only 6 percent of the federal poverty line, $12,880. That $1.90 figure is purchasing power parity adjusted to be directly comparable to spending those amounts in the United States. Why is one-nineteenth of the threshold for rock-bottom poverty in America a valid Global South metric?

Now let’s inspect those fabulous factoids flaunted by optimism evangelists like Steven Pinker, who laments that trends like “137,000 people escaping extreme poverty per day” aren’t better-known. From 2009 to 2019 the aggregate global personal income pie grew by $37 trillion. Of that, top-decilers took $8.7 trillion (24 percent) while bottom-decilers got $25 billion (0.07 percent). That’s not a typo. The poor got 0.07 percent, 345 times less than the rich. Proudly brandished claims that global growth is in the business of lifting people out of poverty do not square with these figures.

Zooming in, average annual individual income gains in that decade for top versus bottom deciles were $1,800 and $5. $5 a year is 1.3 cents per day — a far less laudable feat than Pinkerites celebrate. It’s hard to argue that $5 added to $694 is really an “escape” from anything.

What acrobatic ethical contortions could justify improvements in elite living standards getting a resource priority 345 times greater than the basic needs of the vast majority of people on the planet? Are fancier wines or faster cars really that much more important than preventing 150 million kids from being permanently stunted by malnutrition, or getting food to the nearly two billion people experiencing food insecurity? The figures are obviously indefensible — and that’s why so many prefer to focus on other figures instead. The first chart is a lot less appalling than the second chart.

As one UN poverty expert observes, ending poverty by “growth alone, without far more robust redistribution,” would take centuries and a 173-fold world pie supersizing (Rosner estimates five-fold growth in a “few generations”). The enthusiastically celebrated rate of “progress” makes closing the rich-poor gap a pie-in-the-sky fantasy. These progress-cherishing charts and stats — championed ironically by some of our most devoutly data-driven journalists — plot a very particular kind of self-flattering story, but they’re lipstick on a resource-misuse pig.

The data couldn’t be clearer. The global economy, that gigantic Rube Goldberg enactment of our collective ethics, has no real mechanism for alleviating inequality and poverty. That so many believe capitalism is making fantastic “progress” against poverty by showering the poor with trickle-down blessings testifies to a spectacularly successful coverup. Disguising rapacious global profiteering as anti-poverty do-gooding is genius PR.

The global poverty debate’s arbitrary metrics are cherry-picked to conceal grisly truths. In reality, the capitalism’s-got-this chorus is celebrating an unbelievably bad situation. Their pious faith that market forces will maximize flourishing is both a farce (the bare facts refute such fantasies) and a moral fiasco. Market forces have given the bottom 10 percent of humanity only 0.1 percent weight in the global economy. This isn’t an accident — as philosopher of economics Lisa Herzog argues, markets discover moneyed desires and prioritize them over unmoneyed needs. Unless we can guarantee that the poorest can afford to survive, markets act as moral monsters.

So, what can be done? First, we must face the bare un-Botoxed facts, however ugly. Real progress is impossible if elites shield their greed behind feel-good figures. Next, we need to take global action against resource inequality. As with the climate crisis, the problem can’t be solved on a nation-by-nation basis. We should consider emerging global tax efforts. The World Inequality Lab’s multimillionaire wealth tax, Gabriel Zucman’s G20 market-capitalization tax, or a 0.7 percent billionaire wealth tax could quickly “eradicate extreme poverty.”

If those aren’t considered acceptable, I await an avalanche of proposals from the poverty-alleviation fans who’ve been promoting the rosy but false narratives of progress.