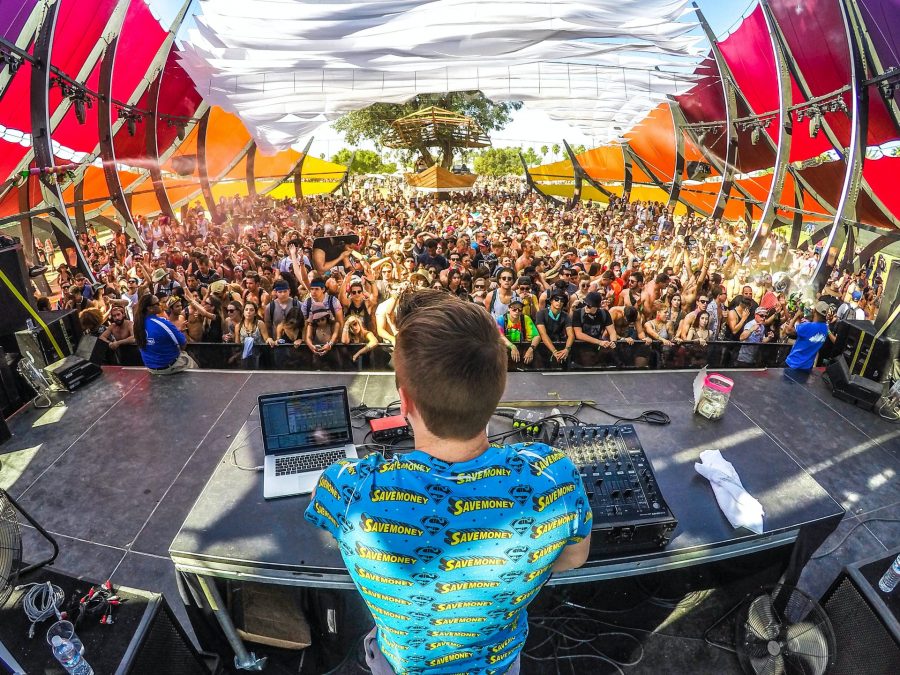 Coachella Is a Carnival for Capital

Coachella is less a music festival than a showcase for brands. You could even say that Coachella is at the bleeding edge of capitalist bullshit.

After a two-year hiatus, Coachella is being necromanced back into existence on the grounds of Indio’s Empire Polo Club. Headlining acts include Harry Styles, Billie Eilish, and festival favorite Swedish House Mafia, whose most notable aesthetic contribution is a 2012 Absolut vodka ad with robot dogs. Festival classics will be trotted out again. SPECTRA, a seven-story tower by UK design studio NEWSUBSTANCE, will be back for people to wander around aimlessly in. Robert Bose’s Balloon Chain will also be on hand to lend “an epic dimension to our collective experience.” And some new attractions — like a secret sushi bar by Phillip Frankland Lee and Margarita Kallas-Lee, where you can get a $375 omakase — will make their debut.

Coachella has been around long enough to move in and out of cultural relevance. Opened in 1999 by Goldenvoice’s Paul Tollett as an attempted synthesis of 1990s music festivals, Burning Man, and “the sixties-era longing for a new world which three days in the desert helps satisfy,” it slowly transitioned from a post-grunge focus with headliners like Rage Against the Machine and Radiohead to the pop and EDM (electronic dance music) orientation seen today.

Functioning for some years as a proving ground for young influencers, it has often been criticized for everything from “cultural appropriation” to brand lionization. In 2016, the New Yorker’s Carrie Battan, noting the festival’s commercialized sartorial sensibilities and its generic music, wrote that “it would be a waste to lament Coachella as a moneyed and hollow representation of counterculture.” It other words, it never really pretended to be anything else.

But while Coachella is just another feature in a denuded cultural landscape, it still manages to chart new territory in marketing. In its development of new ways to promote products and glamorize consumption, the festival is a thought leader in the transubstantiation of low-grade consumer garbage into something vaguely resembling a bohemian experience. In this, it remains at the bleeding edge of capitalist bullshit.

Here in This Desert, It’s Just the Same Thing Over and Over Again

Coachella is, of course, ostensibly a music festival, and, over the years, musical acts have made headlines for memorable performances. Daft Punk played the Sahara Tent in 2006 — as Steve Aoki recalls, “It like changed people lives, including mine, forever.” There was the unforgettable Arcade Fire ball drop of 2011 and Beyoncé’s historically black college and university tribute performance in 2018. Most notorious, and most emblematic of the festival’s grotesque sensibilities, was 2012’s resurrection of Tupac, in which a hologram of the rapper (one that hasn’t aged too well) performed with Dr Dre and Snoop Dogg. “Fuck the world” indeed.

But the event has mostly been a showcase for brands. While attendees come for the music, they spend a good deal of their time in various lounges or brand experiences organized to promote the festival’s sponsors. One festival mainstay has been the Heineken House, where attendees can sip the easy-drinking Dutch lager and listen to EDM (“You’re invited to kick back with friends, dance to an unmissable new lineup & enjoy ice-cold beer.” Other notable experiences have been the Kombucha Bar, the brainchild of GT’s Living Foods CEO George Thomas Dave, where visitors could sample the fermented beverage while attended by kombucha sommeliers dressed like Chippendales. In what seems like it can’t possibly be true, this year, Frito-Lay will debut an art installation known an “Potadomes,” where attendees — again, this is real — can enjoy a four-part tasting menu where they will “be the first consumers to ever experience Lay’s potato chips in their freshest form, with potato chips served less than 24 hours after they are made.”

While certainly nauseating on an aesthetic level, potato chips and kombucha are ultimately more or less harmless compared to some of the financial products the festival pushes. For several years, American Express has been a partner of Coachella and has offered cardholders certain perks during the festival. This year is no exception. Cardholders get access to the Amex Lounge “featuring limited-edition artist merch, tarot card readings, a bar, and much more,” and can receive “a complimentary gift of Supergoop sunscreen.” Running a familiar script, the company oversells these depressing incentives by larding their copy with market-tested power words. As the website boasts, “COACHELLA IS EPIC #WITHAMEX.”

Coachella is a thought leader in the transubstantiation of low-grade consumer garbage into something vaguely resembling a bohemian experience.

With consummate predictability, the festival has also reemerged from the pandemic as a purveyor of NFTs. Each festival goer can claim their own In Bloom NFT, which will mature and “bloom” into a desert flower that can then be redeemed for various goods and services. Thrillingly, six of the NFTs will grow into “rare” flowers that can be exchanged for better prizes, like premium merch, future festival passes, and access to the FTX VIP lounge. Even more NFTs are available on the festival’s marketplace, where one can purchase Solana-based tokens — a “carbon neutral” crypto — including special keys that grant lifetime access (think of it) to the festival. The NFTs are downloadable from FTX US, a crypto exchange website and cosponsor of the festival. Presumably, the company thinks attendees will get a taste for them and be back for more.

To hype the tokens, concert goers also received several packets of physical seeds along with their bracelets. Parroting the standard logic of multilevel marketing executives, the packets philosophize, “Growing things sustainably takes time, whether you’re planting a physical garden or growing a digital token. How does your garden grow?” Beyond the fact that this sounds like something written by the Zodiac Killer, it’s also a way to falsely analogize sustainability with the nonsense emerging from the crypto community while glossing over the obvious contradictions. Moreover, it playacts climate change advocacy while ultimately propagandizing what Luke Savage has called “the ongoing descent of capitalism into pure simulacrum.”

The Wisdom of the Desert

While Coachella is one of the most cynical cultural events in today’s already crowded scene, it’s the festival’s hypocritical climate moralism that is perhaps its most offensive element.

Reading through its promotional materials, one would never know Coachella takes place in a state and an area in the grips of a megadrought, ravaged by annual wildfires, and polluted by endless warehouses. It is also, again without a hint of contradiction, situated in a desert that nevertheless has some of the highest water usage in the state. Indio has the eighteenth-highest water consumption in California. The Coachella Valley Water District, which serves several neighboring municipalities, including Rancho Mirage and Palm Desert, was ranked third highest. Palm Springs, just up the road, is fifth, and has the highest per capita swimming pool ownership in the country. The area is also known, darkly, as “the golf capital of the world,” with over one hundred courses. And water consumption in the region is increasing. An inland surf resort is currently seeking approval to break ground in La Quinta, California.

The most spectacular monument to the area’s troubles is the Salton Sea, once a resort destination that has since been fouled by farm runoff. In the inexorable process of evaporating away, it is leaving behind a putrid, brackish slick that occasionally sends up clouds of toxic dust, impacting health across the region. In Imperial, William T. Vollmann’s history of water, labor, and land management in Imperial County and surrounding areas, he describes the coast of the Salton Sea in North Shore, California: “the beach literally [is] comprised of barnacles, fish bones, fish scales, fish-corpses and bird-corpses whose symphonic accompaniment consisted of an almost unbearable ammoniac stench like rancid urine magnified.” Coachella takes place twenty-four miles away.

While the festival nominally acknowledges its own environmental impact and makes some attempt to address it, this amounts to little more than a name-check. The festival website extends a “pledge to be an agent of change and create a festival that leaves a positive impact on our desert home and beyond.” More practically, it exhorts people to “minimize single-use plastics” and urges attendees to participate in Carpoolchella. Most risibly, Coachella encourages attendees to “speak up about the impacts of climate change.” Really, much of this seems to have time-traveled from thirty years ago, an age when recycling and turning off the tap while brushing your teeth was going to be enough to save the world.

In its most bizarre and embarrassing scheme by far, since 2004, the festival has offered TRASHed, an ecologically oriented art exhibit that transforms “ordinary recycling bins into works of art that inspire people across the globe to see the beauty in recycling.” The festival actually invites attendees to wander around a display of decorated recycling bins: “Don’t forget to photograph and share your favorites!” Coachella then gifts these decorated bins to schools in Mexicali and Tijuana because, of course, “Climate Change has no border walls.” Without even the courtesy to pretend this is a serious initiative, TRASHed engages patrons in a symbolic, and evanescent, pantomime of ecological responsibility so that they can go see Doja Cat and enjoy the Frito-Lay immersive tasting experience guilt free.

Not since the days of Monterey Pop, or perhaps Live Aid, has anyone really believed that a music festival could be something revolutionary — or even transformational. Most festivals today have become part of a grim cultural routine with no political or aesthetic aspirations. But Coachella still manages to outdo the rest. In making their pilgrimage to the desert, attendees encounter a marketing laboratory that works overtime to contort the feculence of corporations and the financial world into something transcendent. And all of it is a distraction, not even an entertaining one, from capitalist power and from the climate catastrophe that is already here.