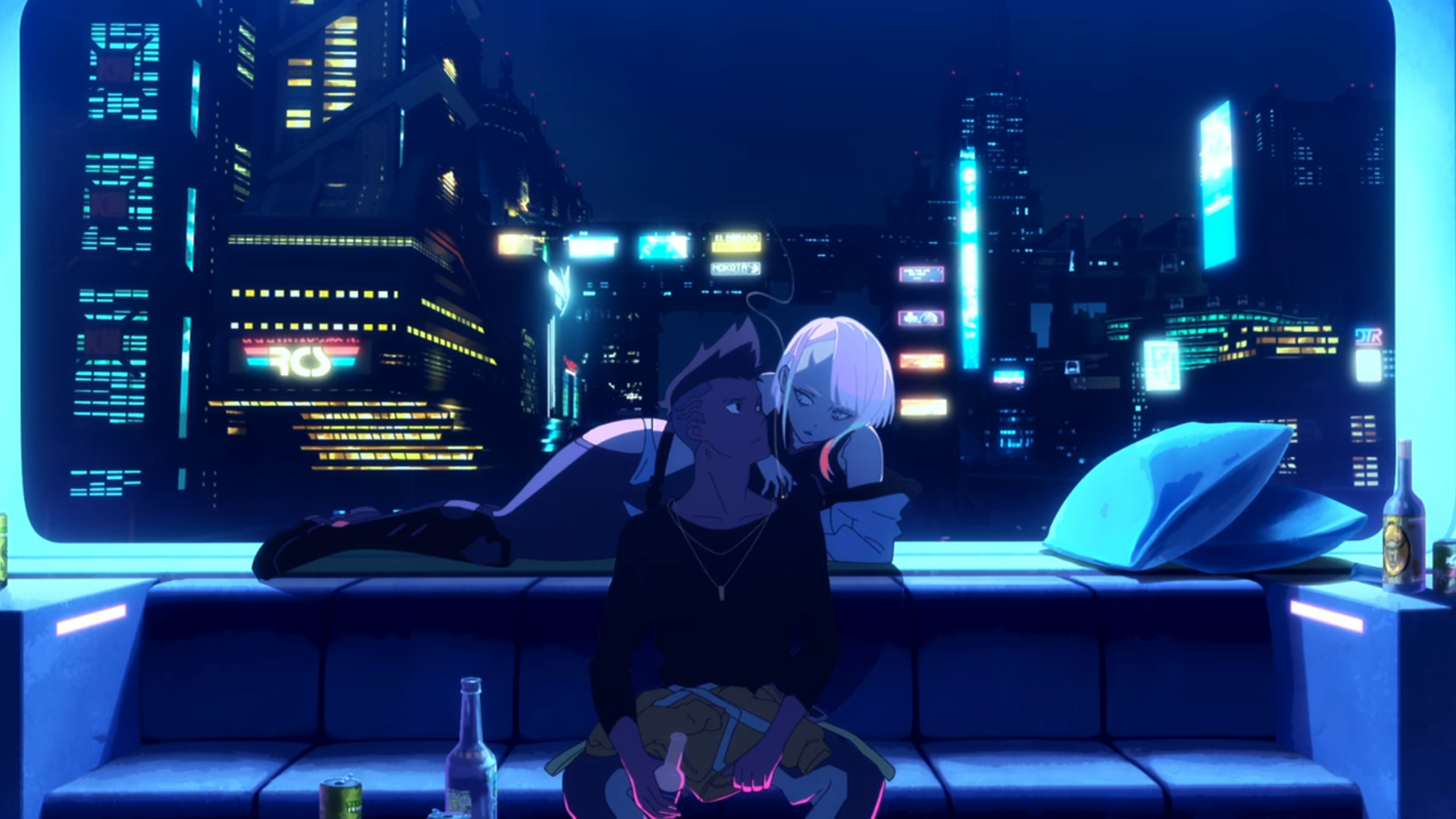 ‘Cyberpunk 2077’ Finally Becomes the Anime It Always Wanted to Be

Cyberpunk and anime go together like film noir and venetian blinds. Anime is mostly a visual style that can be applied to any genre, but some of the great foundational anime like Akira, Ghost in the Shell, and Serial Experiments Lain share themes and aesthetics with the cyberpunk genre. That’s why Cyberpunk 2077, a pastiche of the genre, references anime so much. And now, with the release of an anime based on the game on Netflix, Cyberpunk: Edgerunners, the snake is eating its tail, but in a good way. The Japanese, psychedelic melancholy take on the game is great, even if it’s story is a little too similar.

The story of Edgerunners is the story of David and Lucy. David’s mother is working long hours as an emergency medic to put him through school at the Araska academy. David is smart enough, but doesn’t have the social background to fit in at school and he hates it. His mother dies in the first episode and he’s left picking up the financial pieces of their precarious life.

Enter Lucy, a neon-noir femme fatalle with a monowire grip and hair that glows like Night City’s lights reflected in its wet streets. She and David embark on a journey into Night City’s criminal underground, taking jobs from a fixer and trying to stay one step ahead of the corps, their bills, and cyberpsychosis. Lucy has a dream. She wants to go to the moon. David needs a purpose in life and finds it in Lucy.

If you’re a fan of the cyberpunk genre or the video game, you’ve heard this story before. A down on their luck merc rises through the ranks looking for the big score. From Neuromancer to Night City, this story only ends one way. What makes them distinct is the delivery. Cyberpunk is as much an aesthetic as a genre and Edgerunners nails the feel.

It pulls sound effects, musical tracks (both songs and instrumentals), and even voice actors from the game. The ring of David’s phone is the same as V’s. The crosswalks let people know when to cross, exactly like in the game. If you’ve played enough 2077 to spot major landmarks, they’re littered throughout Edgerunners. Hackers like Lucy even play the silly minigames from 2077 while they’re hacking.

Cyberpunk 2077 has a bit of a tone problem. It’s a serious game that deals with heavy topics like identity and nightmare capitalism, but it’s also a game where you can make people’s heads explode in hilarious fountains of blood while an advertisement of a guy taking a shit and chugging a beer leers down at you.

Edgerunners sands off some of these edgelord elements but keeps the violence and brutality. Directors Hiroyuki Imaishi and Hiromi Wakabayashi brush away the potty humor and embrace the visceral, almost Tex Avery style, violence of the world. Life is cheap in Night City, especially for the heroes.

Cyberpunk has also always been an international genre. 2077 began life as a tabletop roleplaying game filtered through the mind of Mike Pondsmith. Pondsmith was inspired by movies like Bladerunner and books like William Gibson’s sprawl trilogy. The Polish developers of 2077 read and played Pondsmith’s games, absorbed the source material, and filtered it through their own cultural lens. Now Hiroyuki and Wakabayashi have filtered it again, adding a distinct perspective to Night City. The story here works remarkably well and the aesthetic and script work together in concert. In 2077, they often clashed.

Cyberpunk: Edgerunners is great, but it does make me question how much juice is left in this world. The story of David and Lucy is a spin on the story of V, Johnny, and Jackie. There’s crime, the hustling rise to the top, and the inevitable fall. In both Edgerunners and the game, people tell the main character early on that the only way to become a legend in Night City is to die gloriously. It’s telegraphed early and often. All the player needs to do is control their descent. All the viewer needs to do is wonder how the show will spin the old story.

“We’re totally committed to developing the Cyberpunk IP further, beyond this CP expansion,” CD Projekt Red vice president Michał Nowakowski said in a recent call with investors. “We’ve invested a lot of time and effort into building this franchise and we definitely want to build on top of what is there right now – new stories, new experiences, new content – not just in the videogame format. In terms of expansions there’s going to be just one major expansion; however, there’s going to be new stuff.”

I love Cyberpunk 2077 and Edgerunners. I love the genre and I love the city that CDPR has built out of Mike Pondsmith’s world. But if there are a million stories to tell in Night City, CDPR needs to figure out some that aren’t doomed journeys through its criminal underworld.