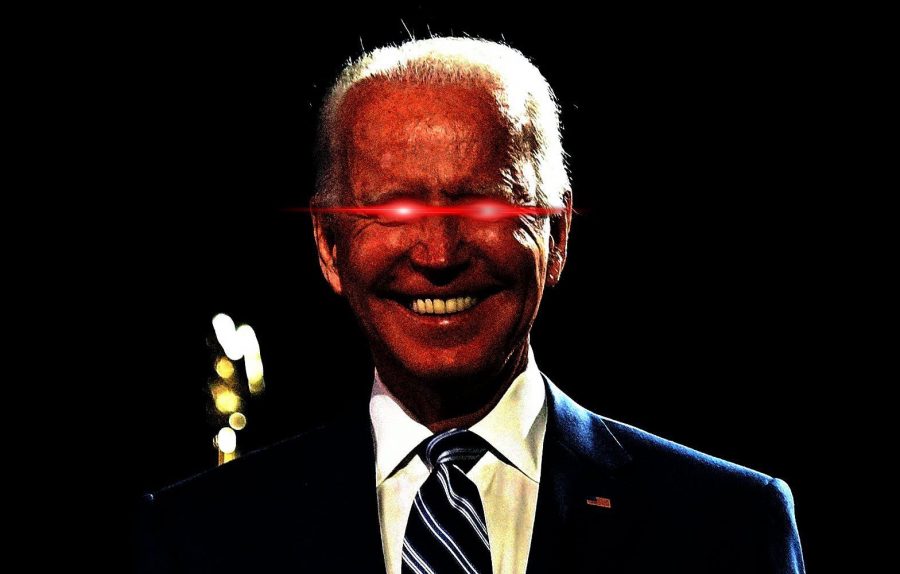 “Dark Brandon” Is a Symptom of Powerlessness

“Dark Brandon” memes are jokes, but they express a deeply felt wish that Joe Biden would turn out to be a firebrand progressive at heart. But Biden is Biden — at his core, he’ll always be a corporate-friendly centrist.

The White House’s director of digital strategy, Rob Flaherty, celebrated the passage of the Inflation Reduction Act (IRA) by tweeting an image of Joe Biden with glowing red eyes. It was a mild example of a “Dark Brandon” meme.

Other versions show Biden with lightning coming out of his hands, Biden with lasers shooting out of his eyes, or Biden sitting on a throne made out of rifles. Many, including one tweeted by Deputy Press Secretary Andrew Bates, reference the president’s eagerness to put an end to “malarkey.”

Dark Brandon is crushing it pic.twitter.com/w0L8xCzIW8

Some of these images are pretty funny, and they’ve been used by different people to do different things. Sometimes the memes are there to mock Republican attempts to portray the man Donald Trump called “Sleepy Joe” as some sort of terrifying would-be dictator. Sometimes “Dark Brandon” expresses frustration with the fecklessness of the Biden who actually exists. Sometimes it’s just absurdist humor with no deeper meaning.

Lately, though, it seems to be doing something else. “Dark Brandon” lends a protective cover of irony and ambiguity to progressives so they can say something they desperately want to be true, but which they’d have a hard time saying with a straight face — that, despite all the evidence to the contrary, President Joe Biden will turn out to be a badass.

It’s not hard to see the appeal of that thought. We live in a time of soaring economic inequality, the Supreme Court has been shredding basic rights, and the global climate catastrophe is getting worse. A president who was a little scary in his dealings with conservatives sounds like a president who might take meaningful action to address some of those problems.

Sadly, Joe Biden is not that president.

The Genealogy of “Dark Brandon”

At a NASCAR event in Alabama last October, a crowd chanted “F— Joe Biden” and a reporter misheard (or pretended to mishear) the chant as “Let’s Go, Brandon” — a reference to the winning driver, Brandon Brown. On the Right, the latter phrase quickly became code for the former sentiment, and a few turns of the wheel of online humor later, “Brandon” was just an alternate name for the president.

A few months later, “Dark MAGA” started making the rounds in right-wing circles, with images of an angry glowing-eyed Trump expressing a fantasy about the former president coming back to power and taking revenge on his enemies. “Dark Brandon” transferred that imagery from Trump to “Brandon.”

In at least some cases, the original idea was close to the opposite of what Rob Flaherty and Andrew Bates were suggesting when they tweeted “Dark Brandon” images. According to Luke Winkie, the memes “first surfaced” earlier this year as part of the “usual gamut of memes and burns” deployed by online leftists who “found themselves euphorically apocalyptic about unchecked climate change, a theocratic Supreme Court, and Joe Manchin’s seemingly insurmountable veto power.” For such leftists, Winkie writes, it was a “way to lean into despair.”

But memes evolve. If Biden does something good, or if conservatives freak out about the possibility that he’ll do something good, a natural move is to reach for the pre-existing joke — “Haha, yes, Dark Brandon rises!” And if, deep down, you really do hope that the president will rise to the occasion and give the Right something to be scared of, it’s easy to tell that joke and find yourself actually meaning it.

The Soul of Joe Biden

When Biden gave his “Soul of the Nation” speech in Philadelphia at the beginning of the month, he didn’t say anything new. The same incoherent combination of (a) calling Trumpists an unprecedented threat to “the Republic” and (b) acknowledging that Trumpists completely dominate the GOP while (c) insisting that he can reach across the aisle to work with “normal” Republicans was a major part of his campaign message in 2020, and he’s repeated it endlessly since then. The striking part wasn’t the content of the speech but the way it was physically staged, with Biden standing in semidarkness, two armed Marines behind him, backlit by eerie red light. As left-wing YouTuber Natalie Wynn put it immediately afterward, “There’s no way this isn’t deliberate Brandonification.”

She may be right. Biden’s communications team may have decided that providing an extremely high-profile nod to “Dark Brandon” is a useful way of encouraging the idea that there’s more to their boss than it appears.

Unfortunately, there isn’t. At his core, he’s exactly what he always appeared to be — a thoroughly mediocre centrist Democrat. I’m glad he finally got around to doing some student debt relief, but that’s something he could have done on his first day in office. And when he deigned to it more than a year and a half later, the version he gave us was, while good as far as it went, a fraction of what’s needed by many borrowers. The average black student loan borrower, for example, owes $52,000 and he only forgave the first $10,000 of that. Brandon’s not exactly shooting lasers out of his eyes on this one.

And the IRA, whose passage Flaherty and Bates were celebrating when they posted their “Dark Brandon” memes, is a culmination of months of increasingly desperate attempts by Biden and his party to pass something — anything — by sacrificing increasingly large chunks of the original Build Back Better package. While the IRA is a mixed bag on climate, combining real environmental investment with troubling giveaways to the fossil fuel industry, on a whole series of other issues, ranging from universal pre-K to paid family and medical leave to tuition-free community college, the goals Biden announced when he took office were simply abandoned.

None of this should be surprising. This is the Biden who was known in the Senate as the “Senator from MBNA” because of his devoted service to the banks and credit card companies based in his home state of Delaware. This is the Biden who, as Obama’s vice president, was put in charge of the effort to achieve “card check” to make it easier for workers to organize unions — and promptly took the effort nowhere.

It’s good that the political landscape has changed enough that even someone like Biden can enact even a needlessly limited version of student debt forgiveness. And it’s unsurprising that conservatives react to him pretty much the way they would if he really were sitting on a throne of rifles and shooting lightning out of his hands. I’m old enough to remember when Bill Clinton was widely portrayed as a wild-eyed communist eager to send black helicopters to round up Michigan Militia types and impose a New World Order. I’m sure that if Joe Manchin was president there would be MAGA types portraying him as a terrifying figure. That’s how it goes.

But the spectacle of progressives half-ironically buying into the idea that Biden truly is Dark Brandon, ready to smite Republicans and impose his will on the country, is more troubling because it’s a symptom of our powerlessness. We could have had President Bernie Sanders. He might not have quite shot lasers out of his eyes either, but he would have at least tested the limits of what’s politically possible in the current environment and tried to change that environment by using the presidential bully pulpit to mobilize popular anger against the billionaire class.

But we don’t. We have a president who’s very far from being on our team, whose opposition is a militantly reactionary GOP, and whose first instinct is always to find a way to compromise with that opposition.

Dark Brandon is a nice idea. But the reality is Sleepy Joe.