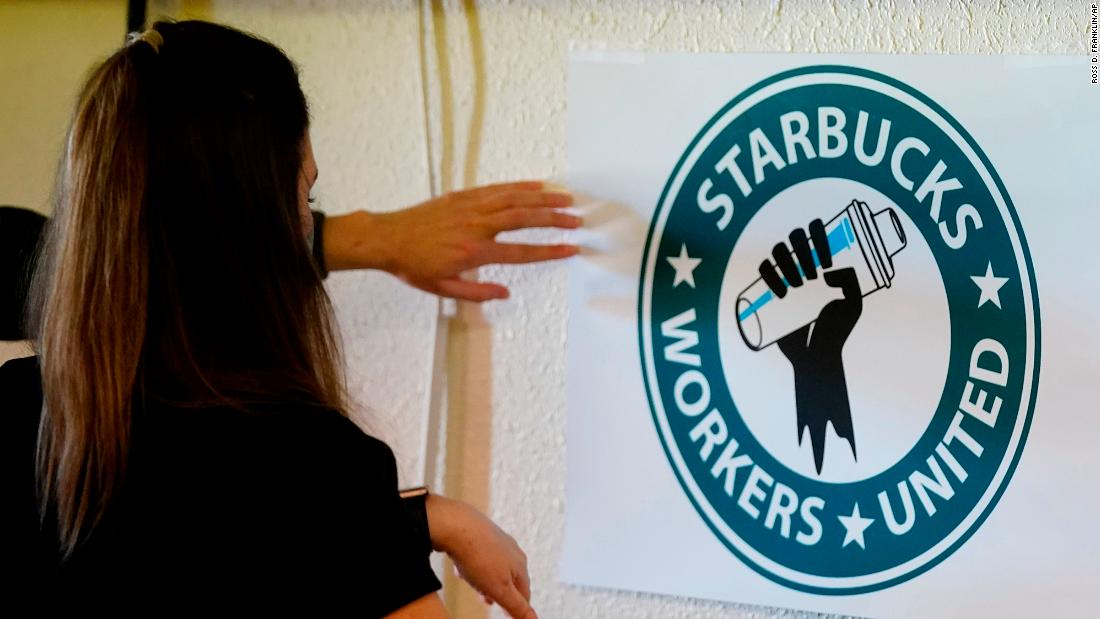 In recent history, those upstart union wins are very much the exception rather than the rule, and American labor laws remain stacked in employers’ favor.

There were 826 union elections from January through July of this year, up 45% from the number held in the same period of 2021, according to a CNN analysis of data from the National Labor Relations Board, which oversees organizing votes at most US businesses. And the 70% success rate by unions in those votes is far better than the 42% success rate in the first seven months of 2021.

But there were only 41,000 potential union members eligible to vote in the 2022 elections. Even if the unions had won all those votes — NLRB data don’t break down how many workers worked at each company holding a vote — it would be a drop in the bucket among the estimated 105 million workers at US businesses who don’t belong to a union, according to Labor Department statistics.

The campaign by the grassroots Starbucks Workers United is a big part of the reason for the surge in organizing.

There have been votes conducted at nearly 300 Starbucks stores so far this year, and while some results have yet to be determined, the union has won at about 200 stores where the results have been certified, or 85% of those votes.

There have been other high-profile victories. In April, an Amazon distribution center in Staten Island, New York, became the first location in the company’s history to vote for a union. In another historic first, workers at an Apple store in Maryland voted to form a union in June. And just last month, workers at a Chipolte in Michigan opted to form a union with the Teamsters.

Many more votes are pending, including at another Apple Store in Oklahoma City and another Amazon facility in suburban Albany, New York. Elections are set at dozens more Starbucks stores.

But those corporate giants aren’t taking the union efforts lying down. In some instances, the companies have shut down the location rather than deal with the organizing effort.

That happened at a Chipotle in Maine and a number of Starbucks locations. The companies insist the decisions were not retaliatory.

Chipolte said it couldn’t find the employees it needed to keep the Maine store open, and Starbucks said its store closings were part of a broader plan to trim stores nationwide for safety issues.

The union said last month that eight of 19 stores slated for closings have either voted for the union, filed for a vote or started to organize. And there is little in labor law that stops a company from doing that.

“Employers have the upper hand,” said Todd Vachon, a professor of labor relations at Rutgers University. “It’s very hard to prove that’s the reason they closed. And the penalties are not even a slap on the wrist, it’s the wagging of a finger.”

Companies also have little to fear in firing employees who are involved in organizing efforts, labor experts say.

At most, they’ll have to pay backpay, plus some modest interest, to the employee if the NLRB convinces a judge the company is guilty of misconduct. The amount the company owes can be reduced by whatever money that employee has earned elsewhere while waiting to have their case heard.

“The penalties are remarkably low,” said Alexander Colvin, dean of the school of industrial and labor relations at Cornell University.

In Memphis in February, Starbucks fired seven employees, including five of the six members of the union organizing committee. The employees and NLRB say the grounds given for the firing were violating company rules in assisting a local television news report about the organizing effort.

It took six months for the NLRB to win a federal court’s ruling that the employees had been fired for their union activity. Starbucks has denied any wrongdoing and is appealing the case, which has stopped any of the workers from returning to their jobs.

“I was initially shocked when I heard of the first firing,” said Nabretta Hardin, 23, a barista who had been at the Memphis store since December 2020 and was among the seven who were fired. “I was actually the last to get fired, so I was prepared. I was initially kind of sad and angry. I’m a great worker. I’ve never had trouble with management, never caused any trouble, never been written up.”

Hardin now works at a locally owned coffee shop she said treats her better than Starbucks did. She said she’s not surprised that Starbucks continues to appeal the case.

“They know they clearly lost the case but they’re dragging it out,” she said. “It’s a slap on the wrist to a company the size of Starbucks.”

The union won the vote at the Memphis in June. But no other store in the city has filed to hold an election. Hardin thinks the impact of the firing on the union movement there was mixed.

“I felt when we got fired, it would put a damper on the campaign,” she said. “But it motivated some other people to fight harder, to say, ‘Enough is enough.'”

Starbucks has said in its own filing that the labor board is working in concert with the union to support the organizing effort, a charge the NLRB denies. It is similar to complaints that have been made by Amazon in regards to the vote it lost on Staten Island, although this week it lost a first round in that case as a separate office of NLRB rejected all of its arguments and recommended certifying the union victory there.

So far, Starbucks has not negotiated a single contract with any of the stores that voted to unionize. It typically takes more than a year to win the first contract after a successful union vote. There is virtually no penalty for a employer who does not reach a contract with the union, said Cornell’s Colvin.

“That’s the next big question — can they win contracts?” he said. “If you don’t start getting contracts, you won’t be able maintain the momentum.”

The AFL-CIO, the largest union federation in the United States, has been pushing for a change in labor law to put some teeth in the penalties that the NLRB can seek against management, and require arbitration if a newly organized company refuses to negotiate with the union. But given the current political situation in Washington, with Republicans unified in opposition, there seems little chance of the AFL-CIO being able to pass its top priority in the near term without getting rid of the filibuster that requires 60 votes to get anything through the Senate.

“We’re not saying this is going to be easy,” said Fred Redmond, secretary treasurer of the labor federation. “We’re not giving up on it … It’s a piece of legislation that basically levels the playing field so workers don’t have to face retribution and abuse.”

Unions have become more popular with the general public, especially among younger workers like Hardin. A poll out last week from Gallup showed 71% of Americans now approve of unions, the highest approval rate since 1965.

But when non-union workers were asked to rank how interested they were in joining a union, enthusiasm was low. On scale of 1 to 5, with 5 being extremely interested and 1 being not at all interested, only 20% answered 5 or 4. Nearly two-thirds gave 1 or 2.

That reluctance, plus the weak state of penalties available against employers, is a major reason why union membership has been slipping steadily for decades.

Labor Department data show only 6.1% of private sector employees are union members, down from 16.8% in 1983. And while union representation is still common in some sectors, such as airlines, manufacturing and health care, it’s much lower in the retail sector, which is one of the segment of the US economy responsible for the greatest number of jobs. Only 4.4% of 14 million retail workers are union members.