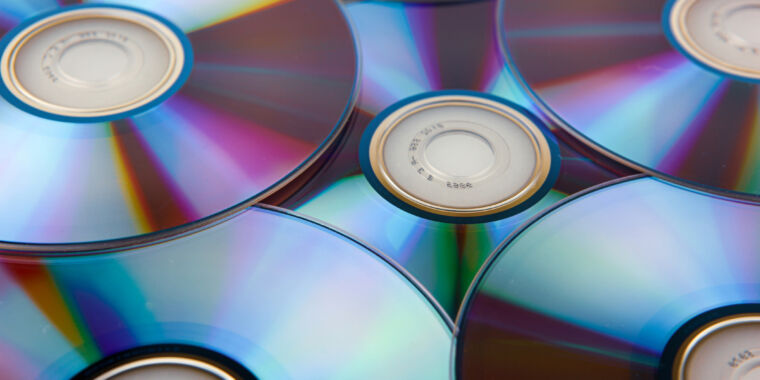 Discs vs. data: Are we helping the environment by streaming?

Earth Day was April 22nd, and its usual message—take care of our planet—has been given added urgency by the challenges highlighted in the latest IPCC report. This year, Ars is taking a look at the technologies we normally cover, from cars to chipmaking, and finding out how we can boost their sustainability and minimize their climate impact.

Gone are the days of going to Blockbuster to pick out a film for a night in. Physical media like CDs, DVDs, Blu-ray discs, Sony’s weird PlayStation Portable UMDs, and countless other formats have been thoroughly dethroned thanks to a barrage of streaming services like Netflix—itself ailing at the moment—Amazon Prime, and Spotify.

For the first time in the past 17 years, CDs saw an increase in sales—of 1.1 percent, or 40.59 million units in 2021, compared to 40.16 million units the year prior. In 2021, people purchased 1.2 billion pieces of physical video media, compared to 6.1 billion a decade prior. Meanwhile, according to the Recording Industry Association of America, revenue from music streaming grew 13.4 percent to $10.1 billion in 2020.

Physical media might not be dead—there are still people collecting cassettes, and vinyl has made a small comeback—but streaming is the norm. Nostalgia aside, this isn’t exactly a bad thing, environmentally speaking. By and large, the energy and emissions that come from streaming a whole season of Seinfeld for the umpteenth time are lower than purchasing that very same season from Best Buy.

However, any environmental benefits differ based on myriad factors such as what time of day you’re streaming, which country you’re in, what you’re watching the content on, etc. Further, while it’s more eco-friendly to watch shows on Netflix compared to a disc, streaming has made media so available that these benefits can be lost due to repeated visits to the “binge-worthy” section.

To stream or not to stream?

Pinning down exactly how much better—under some circumstances—streaming a movie is compared to watching it on a DVD is tricky. Many of the papers on the topic date back to the early- to mid-2010s, and things have changed since then. In one study, published in 2019, Aditya Nair—then a Michigan State University engineering student and now a full-time engineer—and his team performed a comparative life cycle assessment between a Blu-ray disc and a Netflix movie. The paper resulted from an engineering class the team took, during which they could perform the comparative life cycle assessment on whatever they wanted. At the time, in 2016, streaming services were well on their way to displacing physical media as the world’s delivery method of choice. “It was usurping physical movie watching, and that’s only gotten more intense over the years,” Nair told Ars.

For the assessment, the team had to make certain assumptions. For one, they assumed that the viewer of the movie was in Ann Arbor, Michigan (which matters because of the sources of energy that go into powering a TV and the distance a disc would need to travel, among other factors), and that they were either watching a DVD in 2011 or Netflix in 2017. The viewer also owned a typical LCD TV set.

A life cycle assessment takes into account the energy and emissions (among other things) that go into these media, from creating the file or disc to watching it and (in the case of a disc) throwing the media away. For a physical disc, the assessment factored in the process of writing the file to the disc and packaging the disc, plus any energy and/or emissions that came from the retail process, purchase, and, ultimately, its use. For the digital file, the assessment only included server loading, file delivery, and use.

Nair and his team collected data on the two delivery methods from previous life cycle assessments, pieces of corporate reporting, and the EcoInvent database and ran it through a piece of life cycle assessment software. The results were broken down according to the Tool for Reduction and Assessment of Chemicals and Other Environmental Impacts (or TRACI) metrics, made by the United States Environmental Protection Agency. These metrics included global warming potential (represented in kilograms of CO2 or equivalent), ozone depletion (kilograms of CFC-11 equivalent), and compounds produced that can cause respiratory issues (represented in PM2.5 or equivalent), among others.

Across all of the metrics, streaming a movie was less environmentally damaging than purchasing and watching a Blu-ray disc. In terms of global warming potential, the two delivery methods only reached the same impact when the viewer streamed the movie four times. “As a one-to-one replacement, we found that streaming was better for the environment than watching on a Blue-ray [disc],” Nair said.

Much of this comes from the simple fact that manufacturing a Blu-ray disc has more steps and materials involved. In the case of streaming, over the course of a year, a solid 90 percent of the energy demand came from users operating the electronic devices and data transmission. Comparatively, only 12 percent of the physical option’s energy came from playing the disc—the rest came from manufacturing, according to the paper.