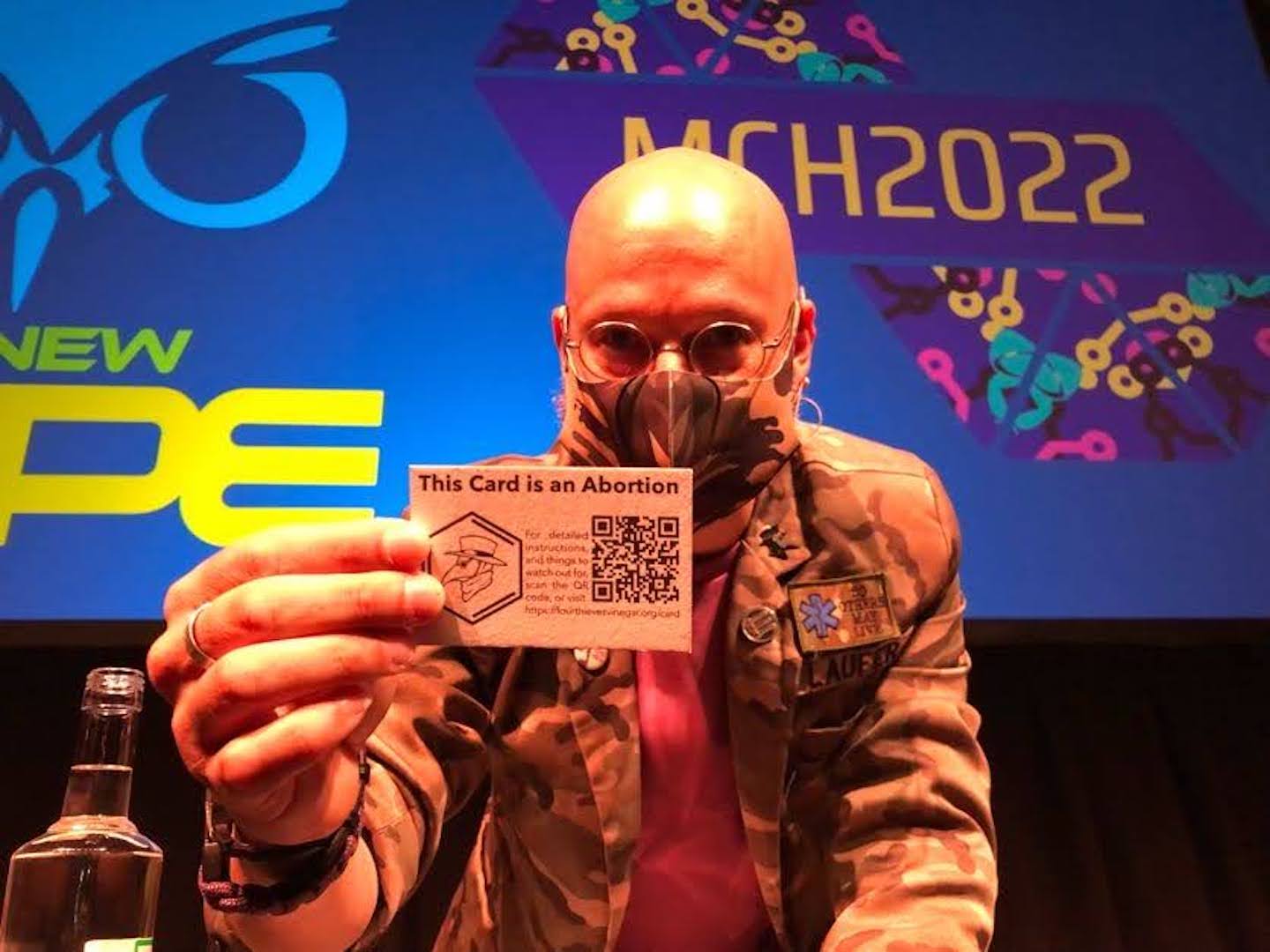 “This Card is an Abortion,” read a handful of business cards distributed by Mixl Laufer, a DIY biohacker, at a hacking conference in Queens Friday. Embedded in the cards are three doses of misoprostol, a medication that safely and effectively induces an abortion when properly used.

“This is a breakthrough that we had,” Laufer said, explaining that having a paper card makes it possible to mail it undetected, as well as distributed in public places or semi-public places like a school’s toilet. The card has the logo of the Four Thieves Vinegar Collective, a DIY medical collective that Laufer has been a key part of for years, as well as a QR code with directions on how to use it.

“Miso Cards are misoprostol abortion pills, delivered in a card format, because it’s easier to send by mail. In use since the mid-1980s, it is 85 percent effective when used alone. It is one of the most effective drugs for terminating pregnancies in the first and second trimesters,” the website says.

The website also has instructions for taking each dose, what to expect, and what to do if something goes wrong. Since Roe v. Wade fell, Four Thieves Vinegar Collective has been working on ways to distribute information about how to make DIY misoprostol to the masses. Misoprostol is usually recommended for use only in the first trimester or so of pregnancy; the World Health Organization recommends it be taken in the first 12 weeks. The Four Thieves Vinegar Collective instructions say “effective for use up to 13 weeks of gestation.”

Laufer was speaking at the Hackers on Planet Earth (HOPE) conference about biohacking and DIY medicine. During the talk, Laufer spoke about the current state of abortion in the United States after the Supreme Court overturned Roe v. Wade. While explaining the different contraceptive methods available in (some) states, he also took out and threw several boxes of Plan B, antiretrovirals, and abortion pills to the audience to take home with them.

“If you believe in infrastructure, then the infrastructure should take care of people. And especially in such basic ways. If you don’t, then you should have the freedom to take care of it yourself,” Laufer told Motherboard after the talk. “And in the current state, neither of these things are options.”

Laufer also explained how anyone can make an abortion medication on the paper card. 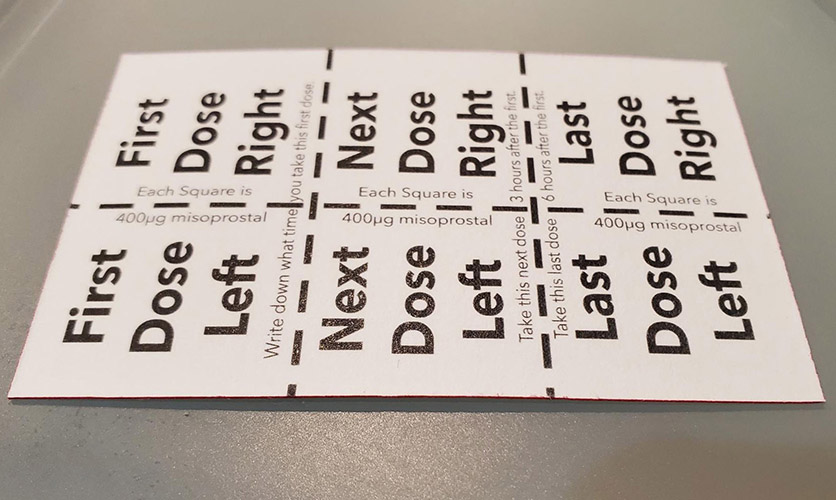 The first thing that someone would need is an active ingredient of misoprostol, one of the two medicines that people can take to have an abortion at home, a micropipette, and a solution with 96 percent alcohol. The process, he explained, is relatively simple. One has to just mix the misoprostol with the alcohol in the micropipette, and then dosing it on the six squares in the card. Then, someone just has to put two of these squares on each cheek, wait a few hours, and repeat the process until all the squares have been used.

Earlier this year, before Roe was overturned, Laufer published a video explaining how to make DIY misoprostol pills, as well as where to find the basic ingredients. They have repeatedly stressed that we should live in a country and world where DIY abortion pills aren’t necessary, but that given the desperate times, it’s important to at least explain how this can be done.

According to Laufer, there are 6.1 million pregnancies annually in the U.S., and 1.1 million of those are unwanted. Each card holds three doses of 800 micrograms. If someone wanted to make enough cards to hand out to all the 1.1 million people who want to have an abortion, all they would need to make is around 2.5 kilograms, Laufer explained.

“Just two and a half kilos would actually cover every single unwanted pregnancy in America for the year,” Laufer said. Of course, it is not nearly as easy as that. Pro-choice advocates regularly explain that abortion should be a safe, legal, and routine part of healthcare.

Laufer also had a message for the Supreme Court.

“I’m really hoping that this revelation is going to make some of us be able to say to a certain nine people that I won’t name: ‘Yeah, It’s just like, your opinion man,’” they said, drawing laughter and some applause from the crowd.

“This problem was solved many decades ago, and there’s absolutely no reason why it should remain a problem. And the fact that there are people who, for whatever reason, find it necessary to exert power over other people, is pretty disgusting,” Laufer said. “So hopefully, people will learn to recognize that seizing control for themselves is an option. And we’ll see more of it.”