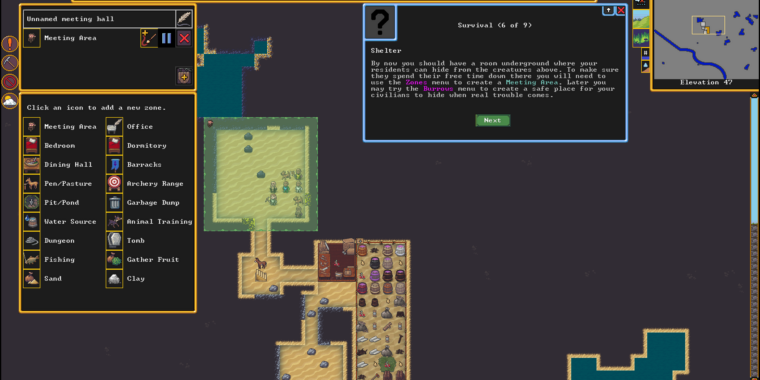 Dwarf Fortress, the most inscrutable game of two decades, is getting a tutorial

Dwarf Fortress, the fantasy mining simulation with the motto “losing is fun,” is softening its learning curve just the tiniest bit. In its upcoming (but not yet dated) Steam release, a new tutorial will explain what you can do and how things work—if not, exactly, how to survive.

Co-creator Zach Adams showed off some images from an optional tutorial in an update on the game’s Steam store page. Even with the upgraded pixel art and improved control scheme of the Steam release, the team thought the newcomer experience “still needs something.” So they built a tutorial that walks a player through camera controls, mining, stockpiling, woodcutting, and, at a basic level, survival.

What’s more, the developers are testing it on Annie, Zach Adams’ wife. After a failed attempt with an earlier version, the latest tutorial took Annie far enough to where she could “tunnel under a bog and drown her fortress.” Presumably, that is good.

“Our aim is to make this level of play achievable by anyone,” Zach Adams wrote on the Steam page. “We want the world to be able to lose this game and have fun doing it.”

A complex game offering a tutorial wouldn’t normally be news. But Dwarf Fortress‘ dense, often impenetrable interlocking mechanics are a large part of the game’s mystique. Former Ars editor Casey Johnston documented 10 hours with the ASCII-based Dwarf Fortress in 2013, starting out with a drive to “avoid using external guides or hints and hold off using internal explanations unless I felt lost.” The results were epic, in the historical sense; things happen suddenly, and there was death.

Gray X’s start streaming in from one wall of the fortress and settle into the clump of icons that were already displayed on the screen. They blink aggressively. One turns into an R, maybe. The rest disappear. I receive no alerts. I have no idea what just happened.

During that journey nearly a decade ago, Johnston noted that an upfront tutorial was far from the only thing Dwarf Fortress could use to make the experience more inviting for, well, just about anybody:

What Dwarf Fortress really lacks, aside from a built-in tutorial that at least gets you started, is the ability to learn from tinkering. I would never have figured out the first step—digging a mine—on my own, let alone the dozens of following steps that apparently are crucial to building an effective, or even rudimentary, fortress. And I’m still not done. And I’m still hitting major roadblocks.

Dwarf Fortress, coded entirely by brothers Zach and Tarn Adams, has subsisted on donations, Patreon memberships, and other goodwill gestures since it began development in 2003. The game’s Steam (and Itch.io) release will introduce a graphical tileset, improved keyboard shortcuts and UI, and, most notably, a price, anticipated to be $20. The money will mostly go toward ensuring the brothers have health care and can sustain themselves through more development. A cancer scare for Zach in the late 2010s pushed the move forward.

The game will continue to be available as a free download, with an optional donation, at Bay 12’s site. There’s no date yet set for commercial release.