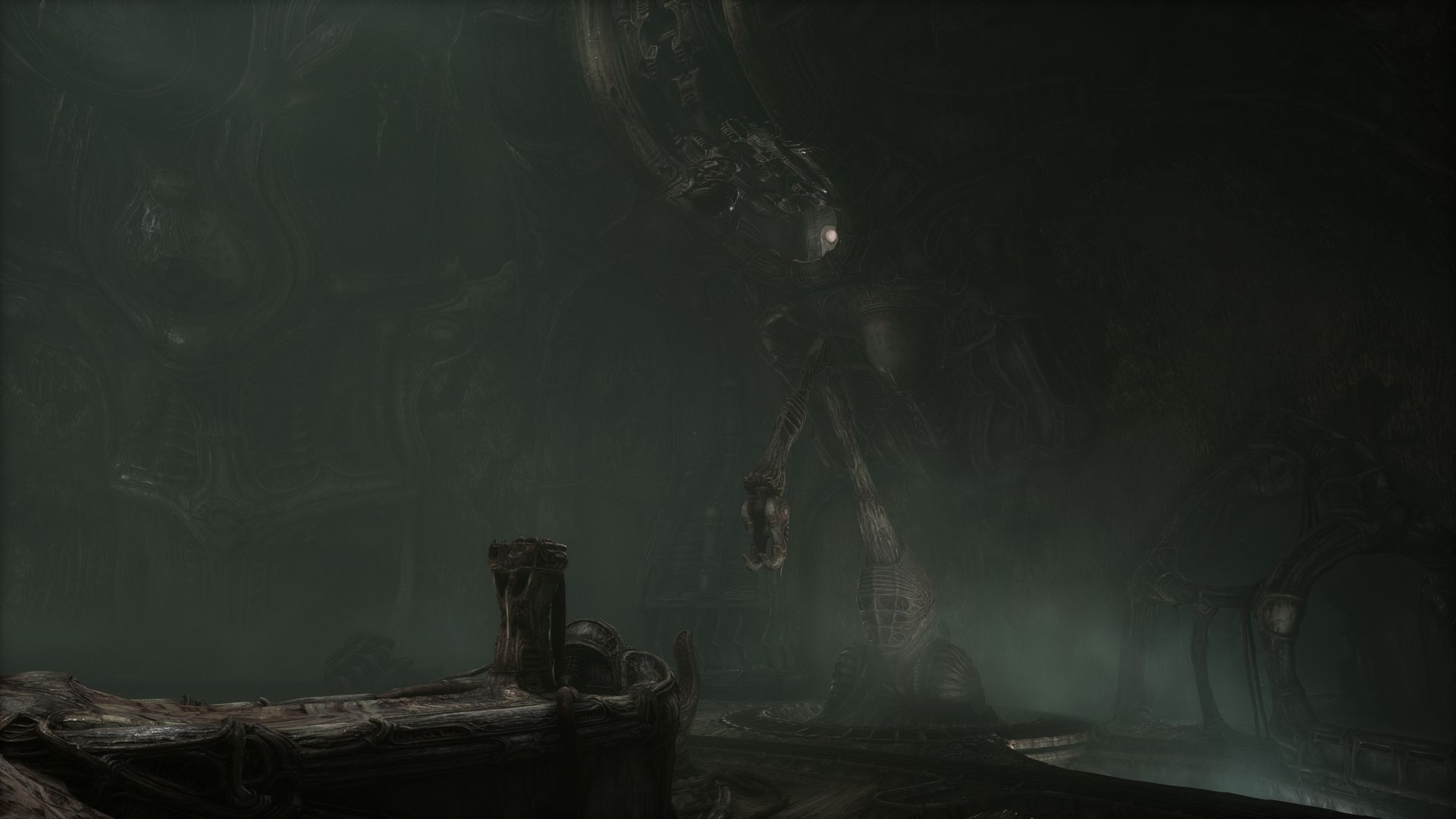 Enter the Nightmarish World of Scorn Today with Game Pass

We talk with Director of Operations at Ebb Software Miroslav Mićević to learn more about what to expect when we take our first steps in Scorn.

Starting today, Game Pass members on Xbox Series X|S and Windows can enter the surreal and nightmarish world of Scorn. From its unnerving surroundings, mysterious world, and frightening creations, Scorn has been one of our most anticipated games to experience as well as one of the most mysterious: What does it play like? Is it a shooter? Will I need a security blanket?

Before diving into its intriguing world — and to answer some of our most burning questions — we had a chance to talk with Director of Operations at Ebb Software Miroslav Mićević to learn more about what to expect when we first set foot in the game, some of the inspirations behind its incredible art design, and what was it like to create a soundtrack for something that’s so… slimy.

Thank you for taking the time to sit down with us to talk about your recently released game, Scorn. To kick things off, can you tell us more about the inspiration behind the creation of the game’s world?

Thank you very much for the opportunity to discuss Scorn with you. Scorn is inspired by art, philosophy, literature, and movies. We could say that the roots lie in existentialist philosophy, the artwork of H. R. Giger and Zdzisław Beksiński, movies of Cronenberg, Lynch, and the like. All of these might be considered influential to the creative process of Scorn’s Game Director Ljubomir Peklar.

Scorn has been described as an “atmospheric first-person horror adventure.” Would you say that puts in the same vein as others in the genre like Dear Esther and Gone Home? Were those games, or others, inspirations behind the creation of Scorn?

Maybe a better description would be a “surreal nightmare adventure.” It’s hard to find direct references among video games, but it is like you are in a gallery observing a dark surrealist painting. Now, imagine yourself jumping straight into that painting making a live surrounding out of it. That’s basically what Scorn is.

Clearly the works of H.R. Giger (“Alien”) were inspired by the look of the game — and it looks incredible from everything we’ve seen. Did you collaborate with other artists related to his artform to bring the world of Scorn to life? What was the most challenging part of replicating that artform into the environment design?

Thank you very much. The biggest challenge was to create each asset in the game since every one of them is uniquely handcrafted. Most of the time you don’t use that method when creating video games. But Scorn, as you said, is a kind of replication of artform. The whole team of sculptors was engaged in a precise reconstruction of a truly horrible nightmare. Not a pleasant task at all.

When working with such muted colors, what is the trick to making key points of interest pop to the player?

Lighting. Sound. Music. Players should open their senses up and the game will mesmerize them and lead them to where they need to be. The lighting team really did a great job in enhancing the experience and giving guidance to poor souls stuck in the world of Scorn.

Aside from the H.R. Giger influence, are there other masters of body horror that the team is inspired by? Are there any fears from the development team that you brought to life in Scorn?

Mostly it is a fear of being a human. Let’s say Cronenberg’s “The Fly,” Lynch’s “Eraserhead,” or even Kafka’s “Metamorphosis.”

Beyond the visuals, which are incredibly striking, can you talk about the game’s audio design? What was it like to create sound for something that’s so… slimy? What were some objects you used as a reference point?

Our sound designers are a crazy bunch. The team did a lot of epic recording sessions which involved the destruction of all sorts of things. Vegetables, wood, bark, cardboard, chairs, pipes, meat, stones. You name it, they probably obliterated and recorded it.

Related to that, can you talk to us about the choice of music for the game? What went into the decision-making process to help find a soundtrack that hits on the mood of this world.

We were very lucky with that since Lustmord, a brilliant composer of dark ambient music, found out about the game and reached out to us. He knew Scorn was the perfect fit for his creation. And it just happened. Also, Aethek, another great composer, had similar feelings. Scorn lures people to itself, you can’t resist the inner urge.

What excites you the most about releasing your game on day one with Game Pass?

That fact itself is amazing! So many players with Game Pass on Xbox Series X|S and Windows will have the opportunity to play the game on day one. We couldn’t have imagined a better start than that. The whole team is super excited about that.

Thank you again, Miroslav, for taking the time to talk to us about this amazing game. Scorn is available now for Xbox Series X|S, Windows, as well as with Xbox Game Pass and PC Game Pass. 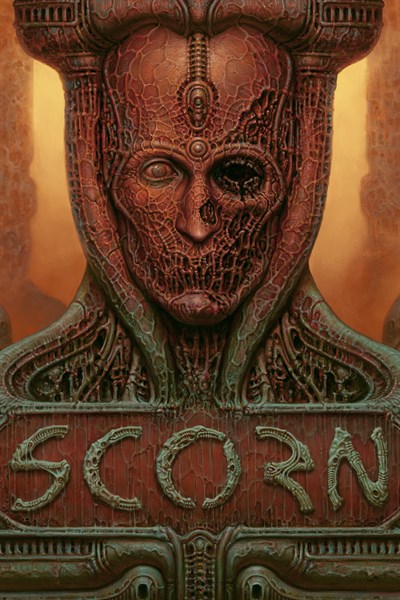 ☆☆☆☆☆
223
★★★★★
$39.99
Get it now
PC Game Pass
Xbox Game Pass
Scorn is an atmospheric first-person horror adventure game set in a nightmarish universe of odd forms and somber tapestry.
It is designed around the idea of "being thrown into the world". Isolated and lost inside this dream-like world, you will explore different interconnected regions in a non-linear fashion. The unsettling environment is a character itself.
Every location contains its own theme (story), puzzles and characters that are integral in creating a cohesive world. Throughout the game you will open up new areas, acquire different skill sets, weapons, various items and try to comprehend the sights presented to you.
GAMEPLAY FEATURES
Cohesive “lived-in” world
Scorn takes place in an open-ended world with different interconnected regions. Each region is a maze-like structure with various rooms and paths to discover. All the storytelling happens in-game, with no cut-scenes to distract you from the grisly reality of the living, breathing world you’re in. But keep your eyes open – the game won’t show you any sympathy if you miss something important on your uneasy travels.
Full body awareness
Players will experience better immersion being aware of the character’s body and movement. Interaction with the world is realistic – objects are picked up with your hands (instead of just floating in midair), machines and instruments are operated by grabbing the controls, etc.
Inventory and ammo management
Your loadout is defined and limited. This plays a big role in keeping the player in an even greater state of awareness throughout the whole game. Players will have to think about when to fight and when to take cover and how their actions affect the world around them. Different play styles will be needed to advance.

Related:
Free Play Days – Embr, Goat Simulator, and Tour de France 2022
Find Out Who Will Sit Upon the PC Game Pass House of the Dragon Gaming Throne
Confront The Herald of the Flame in Sea of Thieves’ Eighth Adventure, Live Until October 27