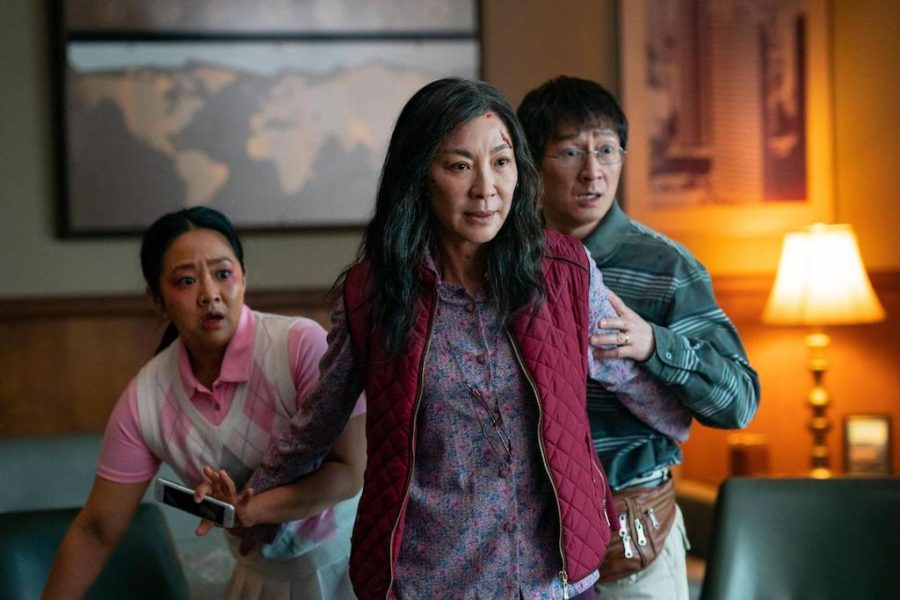 Everything Everywhere All at Once Is a Rare Triumph

It might seem like the most compelling aspect of Everything Everywhere All at Once is its fast-paced, cleverly controlled chaos. But when the wacky fun fades, a portrayal of extraordinary emotional complexity is revealed.

I’ve had a surprisingly hard time reviewing Everything Everywhere All at Once, because my reaction to it keeps changing over time. I was avidly anticipating it, like a lot of cinephiles who see the same things done over and over again in films and get all worked up at the prospect of anything new. Watching the movie was hugely fun at first, generating a fast-paced, cleverly controlled chaos almost from the start, seeming to fulfill all its hyped-up promise.

Then the gradual deflation set in, as the film started getting repetitive and losing steam in what seemed like its overlong 139-minute running time.

Initially I was disappointed overall — though, of course, I wanted to give kudos to Daniels (the professional name of writer-director team Daniel Kwan and Daniel Scheinert) for their inventiveness and energy. I still felt their film was a tremendous showcase for the talents and charms of the fabulous international star Michelle Yeoh, cast against type in the lead role of Evelyn Wang, the frazzled failure in all areas of life who gradually absorbs strength from her innumerable other selves in the multiverse.

But there’s been a strange aftereffect. Now, when I recall the film, I don’t picture the more raucous and colorful scenes everybody’s talking about that represent the teeming variety of multiverse worlds Evelyn bounces around in — the fantastically comical, kung-fu-fighting “butt plug scene,” for example, or that one reality in which everyone has floppy “hot dog fingers” and Yeoh and Jamie Lee Curtis play a devoted lesbian couple with identical pageboy haircuts. When I think of the film now, I just picture Yeoh looking strong, calm, and tender, the ideal maternal trifecta — which means the ending must’ve worked better than I thought at the time.

It’s when she’s confronted by the IRS — one of the most fearsome entities in American life — that Evelyn cracks.

The movie’s basic plot involves dowdy, miserable, middle-aged Evelyn, who’s “bad at everything,” reaching a crisis point in several areas of her life at the same time. Her dingy laundromat business is foundering; her familial relationships are rocky; and she’s in the middle of arranging a combination New Year’s and welcome-to-America party for her crusty, judgmental father, Gong Gong (James Hong), who just arrived from China. Worst of all, she’s being audited by the IRS and trying to organize the thousand wrinkled, grubby documents representing her mess of a life for one high-pressure, make-or-break appointment with fearsome IRS inspector Deirdra Beaubeirdra, an embittered, slit-mouthed, pot-bellied termagant. (Jamie Lee Curtis a total vanity-free hoot in this role.)

It’s when she’s confronted by the IRS — one of the most fearsome entities in American life — that Evelyn cracks.

These riotous early scenes of her apparent mental breakdown involve the sudden appearance of “Alpha Waymond,” the fast and confident kung-fu-fighting version of her sweet but cowed husband, Waymond (played by Ke Huy Quan, the former child actor who was Short Round in Indiana Jones and the Temple of Doom and Data in The Goonies, returning to acting after a long break). His rapid-fire instructions do little to prepare her for the multiverse mayhem that’s about to descend on the IRS offices. There are so many rules for how to navigate the lifesaving leaps to other realities that Evelyn spends almost the first hour of the film just trying to comprehend them. Suffice to say that they involve some impressively mad things, such as having to do something extremely counterintuitive or even viscerally painful in order to prepare for “verse jumping,” like when Alpha Waymond starts seizing sheets of paper and giving himself paper cuts, slitting the tender connective skin between his fingers. (I had to cover my eyes for that one.)

The wacky laughs and action thrills seem like the best part of the movie experience while it’s running — though even that palls a bit by the end due to sheer repetition — while the healing of the dysfunctional family that takes over late in the film seems more slow, contrived, and unmemorable at first. Ultimately, the movie turns into a mother-daughter story, in which Evelyn, who can’t manage any of her relationships, has to resolve the one with her thoroughly estranged daughter, Joy (Stephanie Hsu), in order to save the multiverse. Joy is the host for a nihilistic entity named Jobu Tupaki, who is always dressed and made up for a wild party, minus the party spirit. She rampages through the worlds bent on total destruction in the form of the black-hole-like “everything bagel” force field she’s constructed to absorb all realities.

The image of Evelyn in her worn, quilted maroon vest and the final look of hard-won wisdom in her eyes has stuck with me.

But as the days have passed since I’ve seen the film, the image of Evelyn in her worn, quilted maroon vest and the final look of hard-won wisdom in her eyes has stuck with me. It’s possible that I’m cracking up myself, of course, under the pressure of overwhelming current events, and starting to feel that appalling tenderness for all representations of struggling humanity that is characteristic of certain types of emotional breakdown. But even with that possibility factored in, it seems to me that Michelle Yeoh achieves extraordinary emotional complexity in her characterization of Evelyn.

And Ke Huy Quan matches her in a less showy performance. His plaintive Waymond, routinely dismissed by Evelyn as “my silly husband,” is always trying to lighten the burden of their lives in hapless ways, such as putting googly eyes on random objects in their downscale laundromat, humorously personifying things, suggesting animation in everything inanimate. In one of the alternate realities that features Evelyn as a glamorous movie star who’s never quite connected with the suave version of Waymond she keeps encountering, shot in the style of In the Mood for Love, Waymond makes a touching speech that represents his credo. He acknowledges that he appears weak and ineffectual to others but explains that his constant attempts to soften and lighten life’s grim struggle is “my way of fighting” the terrible forces in the world.

Reflecting on it, it seems like the Daniels have achieved a rare feat of imaginative tenderness in their way of representing ordinary people getting beaten down by the cruel pressures of the world — and still finding ways to get back up again.