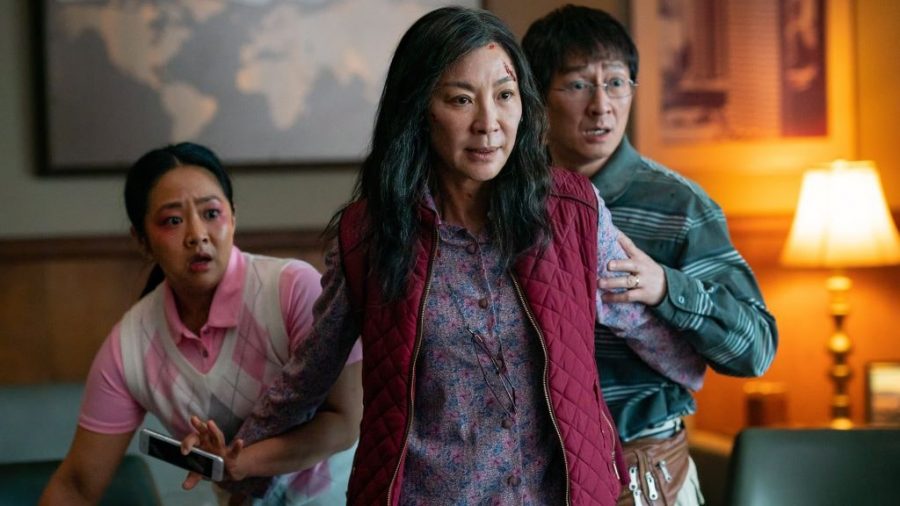 Actually, films that induce this kind of wordless stupor in critics (rarely a bunch to be short of words — short of a lot of other things, but never words) are often bad: Scott Pilgrim, Eternal Sunshine, The Lobster, most Marvel films, all of Charlie Kaufman’s films, and in fact the Daniels’ first film, Swiss Army Man. What is there to say? Lots of stuff happens. There are lots of characters doing lots of eye-grabbing things in short succession. They say cute, disorienting things and do charming, unpredictable things in a predictable sequence, somewhere a story weaves in, the momentum builds, usually it gets chintzy in the end, and then, it ends.

In films like these, the audience is manipulated to produce so many reactions — laugh, cry, gasp — at such a rapid rate that they shortly realize they have two options: stop watching and regain homeostasis or give in to the slipstream of cinematic herky-jerky for a couple hours. And these films are (with the exception of the truly terrible Lobster) usually brightly colored, quickly paced, and full of fun, pretty celebrities inviting you to laugh with them. What kind of stick in the mud can resist? And really what’s the problem? Nothing, in the moment. But by the time you validate your parking, the plot structure goes. Riding up the elevator, the characters go. And by the time you’re half way home, all that’s left of the film in your mind is a few brightly colored wisps — a glib line of dialogue, maybe a particularly well-decorated frame.

Everything Everywhere All At Once avoids the bundt-like (or bagel-like, in keeping with the one of EEAAO’s central images) hollowness baked into the core of films like these — for the most part. The Daniels’ latest swings big for the stylistic fences, but it doesn’t sacrifice heart. Especially when it uses its heart to beat you into a kind of receptive stupor in the last thirty minutes. The emotional cues tug at you from all directions, but most of them are deeply rooted in well-drawn character arcs — except for the Jenny Slate character, a loudmouth Jewish-American princess type who, incredibly, the Daniels actually named “Big Nose.”

The film is fresh in some ways — using sci-fi logic to tell an immigrant story of love and striving is ingenious. In other ways, it just feels like a low-budget Marvel movie that Kevin Feige and co let the creative team have full control over. The most interesting aspect of Everything Everywhere All at Once, the aspect that most certifies the chorus of critical claims to its “freshness” and progressive vision, is actually the movie’s strange connection to a particularly conservative product of Hollywood’s yesteryear.

The film centers on Evelyn Wang, an upper-middle-aged laundromat owner played by legendary Malaysian-born screen star Michelle Yeoh. Evelyn is overworked, harried, hampered by life’s never-ending obstacle course of setbacks and misfortunes, and constantly haranguing everyone around her to do better. Her husband, Waymond (Ke Huy Quan), cheerfully does her bidding but is quietly planning to serve her with divorce papers. Her daughter Joy (Stephanie Hsu) is anything but.

A Chinese New Year party approaches, the IRS is bearing down on the Wangs to get their affairs in order, Evelyn’s father Gong Gong (James Hong) comes from China in poor health to live with them, and all Joy wants is for Evelyn to introduce her girlfriend, Becky (Tallie Medel), to Gong Gong as her girlfriend, not the “very good friend” that Evelyn settles on.

Small fissures grow, threatening to crack open the brittle clay pot of Evelyn’s life, to borrow a metaphor from the film. But help comes from an unexpected, even incomprehensible place. Evelyn and Waymond find ways of tapping into versions of themselves from alternate universes, versions who can outthink and outsmart anything that comes their way in this universe. And a lot does come their way.

After punching out an auditor (an exquisitely funny Jamie Lee Curtis) in a fit of multidimensional confusion, hordes of cops from this timeline join hordes of baddies from many other timelines, who all intend to destroy Evelyn. The baddies swear allegiance to Jobu Tupaki, the only being in the multiverse powerful enough to perceive all matter on all timelines simultaneously. Tupaki sees a threat in Evelyn, who, as alternate Waymond explains, is so powerful because she is the biggest failure of all Evelyns, the one who made all the wrong decisions, and thus the one who can tap into the power of all her better selves. Tupaki is also an alternate of Evelyn’s daughter, who created an evil everything bagel that has the power to swallow up the entire multiverse, naturally.

It’s a waste of time to write about Everything Everywhere All at Once’s plot, because you just need to watch it play out. Aside from Yeoh’s truly extraordinary performance, which completely subverts the poised, supporting-character glamour-goddess type she’s been entombed in, the most interesting part of this film is the surprisingly conservative ending. After two and a half hours of exaggerated performances, narrative experimentation, and extremely high energy genre deconstruction, the film essentially lands on the same note that every family-first propaganda comedy and scare-them-straight woman’s melodrama from the classical Hollywood period used to land on: respect your elders, listen to your children, and love your husband more.

Evelyn learns that the secret to defeating Jobu Tupaki is actually to love her. She only learns that once she finally opens her heart, stops controlling her family, and listens to her husband. Quan zags off some cringe, that reminds her how important love is — “I know you’re all fighting because you’re scared and confused. But you have to be kind, especially when you don’t know what’s going on.”

It bears more than a little resemblance to Rosalind Russell’s maudlin declaration at the end of the forgettable yet utterly characteristic woman’s picture Rendezvous — “Love is my true job!” As with films that are crazy for craziness’s sake, there’s nothing wrong with traditional family values. That the Daniels make such a strong case for them amid such unhinged lunacy in fact establishes an even deeper connection to bright, bewildering women’s pictures of yesteryear. Like those, it may take people a while to realize what a classic Everything Everywhere All at Once already is.