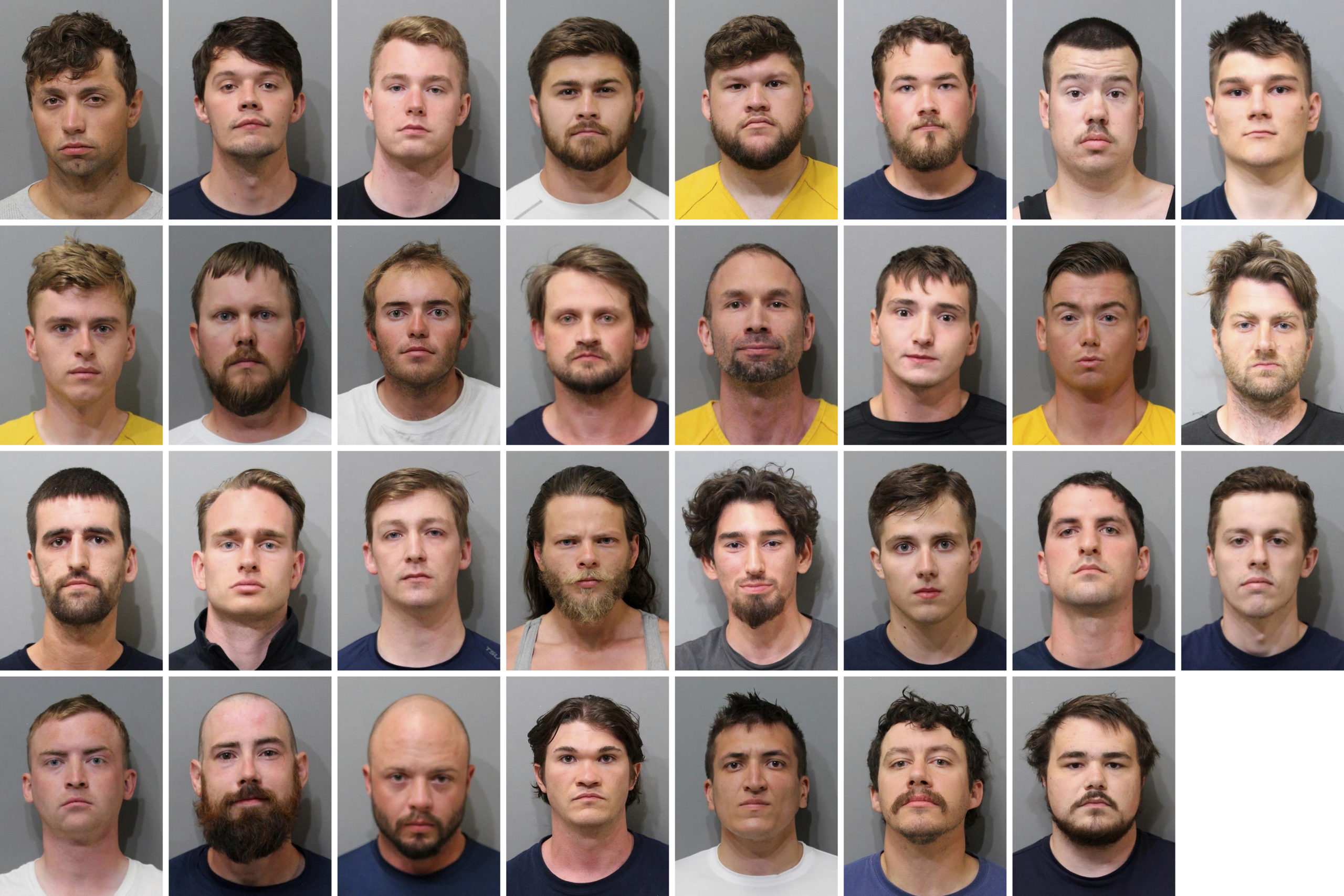 For years, many members of the white nationalist group Patriot Front have mostly managed to keep their identities under wraps.

But now, the mask is off. Thirty-one members of the notoriously secretive, optics-obsessed group, including their leader, were arrested in Idaho over the weekend. And mugshots and names of all 31 arrestees were released by the Kootenai County Sheriff’s Office.

The group was traveling in the back of a U-Haul on Saturday, apparently headed to downtown Coeur d’Alene where an annual LGBTQ Pride event (and a far-right counter-event) was underway, when they were intercepted by local law enforcement.

Coeur d’Alene police said that a “concerned citizen” called the cops when they noticed a group who resembled “a little like an army” clambering into the back of a U-Haul with shields.

Video footage showed police rolling up the rear door to reveal men packed like sardines into the back of the truck. All the men were in Patriot Front uniform—khakis, navy jackets, sunglasses, caps, gloves, and white balaclavas covering their faces.

Unsurprisingly, all 31 of the men who were arrested are white and male, per the group’s requirements. According to a booking memo, all men were aged between 20 and 40 (Patriot Front typically requires members to be under the age of 35).

They hailed from a dozen different states: seven from Texas, six from Utah, and five from Washington. Just two are from Idaho, but neither is from Coeur d’Alene.

They were booked on misdemeanor charges of conspiracy to riot. Law enforcement recovered shields, shin guards, and a smoke grenade in the rented U-Haul truck.

The arrests set off an online feeding frenzy among antifascist activists trying to glean more information about the men behind the names and mugshots.

An activist group in Spokane, Washington, identified brothers Mishael Buster and Josiah Buster, both arrested in Idaho. They are the sons of Matt Buster, who leads a congregation called the “Real Men’s Ministry” and has ties to former Washington state rep. Matt Shea, who was accused by his colleagues of domestic terrorism.

Activists in Portland, Oregon, identified another arrestee, Jared Boyce, as being formerly affiliated with a slightly more moderate far-right group Patriot Prayer, particularly in connection with the anti-lockdown movement in March 2020.

Patriot Front formed in 2017 as a splinter faction of a neo-Nazi group Vanguard America, which came under heavy scrutiny after members were seen at the Unite the Right rally in Charlottesville marching alongside James Alex Fields, who later rammed his car into a crowd of protesters and killed one.

Thomas Rousseau, 23, the former leader of Vanguard America’s Texas chapter, created Patriot Front around some of the hard lessons that the far-right had learned from Charlottesville. Rousseau realized that openly embracing neo-Nazi iconography and rhetoric, as Vanguard America had done, was detrimental to the movement’s broader goals of radicalizing more people to white nationalist ideology. Instead, Patriot Front cultivates a preppy Americana aesthetic and relies on euphemism to express old racist tropes and ideas.

Another key lesson from Charlottesville that Rousseau built into Patriot Front was how members should mobilize in public. The majority of white supremacists who marched in Charlottesville did so with their faces uncovered, meaning they were easily identifiable; many of those who attended reported losing their jobs as a result of their participation.

Patriot Front goes to great lengths to conceal their identities. When they appear in public, they do so with their faces completely covered. They typically arrive to events flash-mob style—in a fleet of unmarked cars, U-Hauls or Penske moving trucks—and then leave quickly. Members are required to fulfill a quota for distributing the group’s propaganda—like fliers and posters—which they scatter across their respective “regions,” and are required to take videos or photos of their handiwork, which are then sent to Rousseau as “proof”). Members are also asked to pay out of pocket for those stickers and posters, which Rousseau himself prints.

They have an exhaustive vetting process, and are required to use aliases even when communicating with one another.

Despite all these precautions, they’ve been infiltrated several times by antifascist activists who’ve leaked their communications, hundreds of gigabytes in total that left-wing media outlet Unicorn Riot has organized and published. Activists also have a blog dedicated to doxing Patriot Front members, called “Patriot Fail.” There were just four names that overlapped with the list of members that activists had previously identified.

All arrestees, who have since been bonded out, were expected in court Monday to be arraigned on a single misdemeanor charge for conspiracy to riot. The FBI has said that they are also investigating.

What these arrests mean for the future of Patriot Front are currently unclear. If convicted on conspiracy to riot misdemeanor charges, they could get six months in county jail, a maximum fine of $1,000, or both.

Membership numbers have been kept under wraps in the past, but was estimated earlier this year to be around 220. And on Monday, local activists in Charlottesville, Virginia noticed a fresh Patriot Front propaganda sticker in the alleyway dedicated to Heather Heyer, who was killed during a white supremacist attack four years ago.