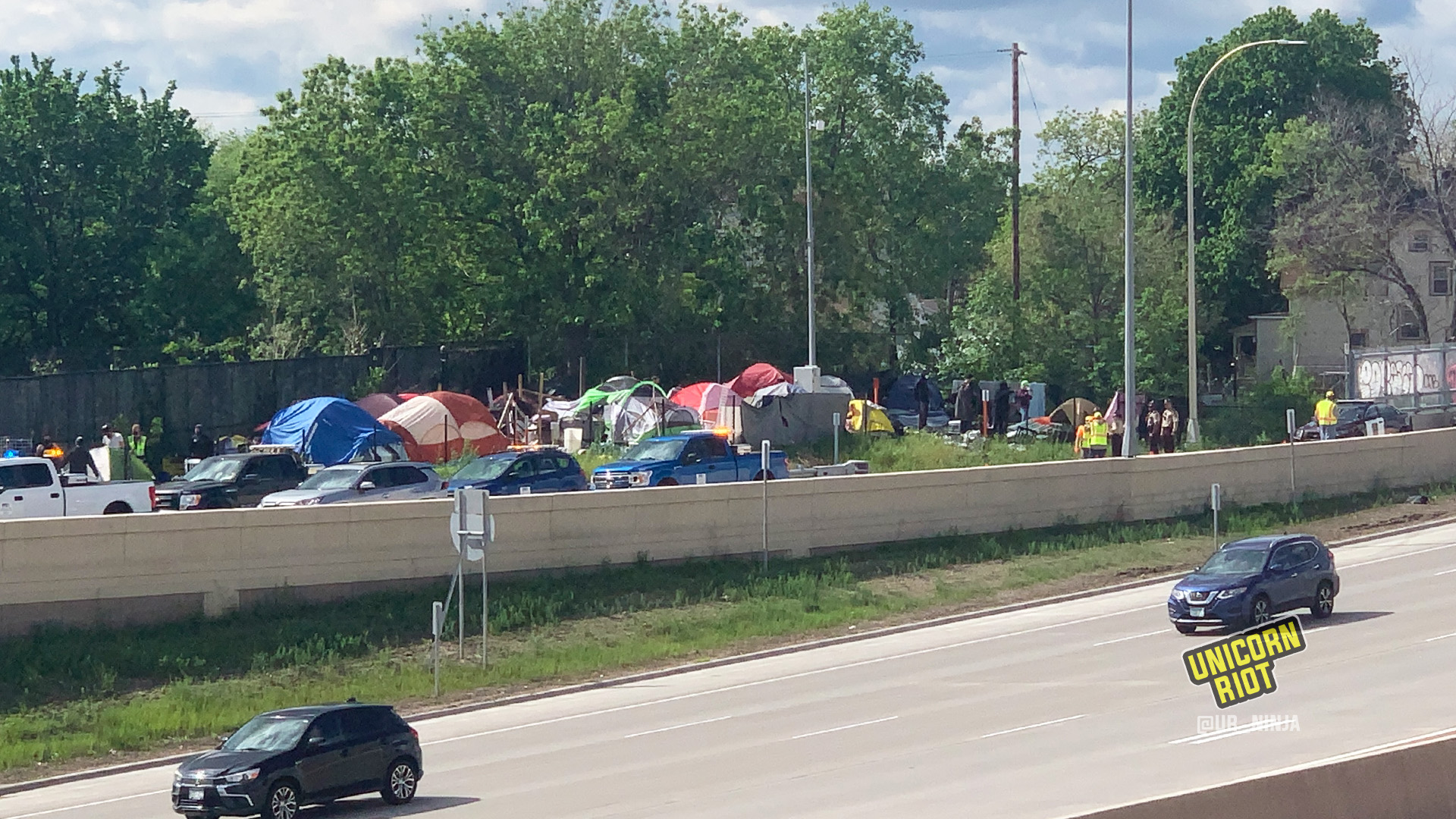 Minneapolis, MN – On June 1, 2022, authorities unsuccessfully cleared an encampment of tents on an unused strip of land off Interstate 35. Eviction defenders thwarted the sweep by asking for documents, helping residents pack and move, and using their bodies and placing objects in the way of authorities. Despite aggression from the contractors hired for the eviction cleanup, no tents were taken. Yet, all residents have since moved.

Arriving around 9 a.m., State Patrol officers and Minnesota Department of Transportation (MnDOT) workers arrived to the encampment next to the northbound 28th St. exit from I-35W, with plans to clear the tents. Residents of the camp started living there because the previous encampments they lived in were also swept by the city.

The strip of land that hosted more than a dozen tents was next to the large Wells Fargo Home Mortgage Headquarters office complex. The eviction was allegedly triggered by complaints made by Wells Fargo employees. Other reasons stated at a later nearby community meeting included the camp being larger than 25 people and that a fence was being used to dry towels.

Filmed discussions between press, eviction defenders and the authorities showed Minnesota State Patrol officers announce that they hadn’t seen proof that an eviction notice was given, but that MnDOT had given notice to residents of the camp in the prior week. Some residents said they never received notice. The authorities said their supervisor would bring the documents, however the documents were never shown.

The encampment was separated from the interstate by a chain-link fence, and in preparation for clearing the area, MnDOT crews cut the fence with power saws. They didn’t take any tents, nor did they attempt to. At times, eviction defenders stood in the way, or near where MnDOT workers were cutting the poles and fencing.

Big Top Contracting, hired to assist the city in the sweep, arrived on the scene around 10 a.m. with several vehicles and workers. Alfonzo Williams, owner of Big Top, walked up taking photographs with his phone. He then initiated an aggressive sequence of events by ordering his crew of workers to start uprooting tents, some of which were housing people at the time. “Take it. Take it. Take it,” Williams barked at his workers.

Neither the State Patrol nor the MnDOT workers made moves to start clearing tents up to that point. Shortly after Williams called on his workers to take the tents, and as tents were beginning to be disassembled, a State Patrol officer came up to the MnDOT supervisor and told him they were stopping the operation and everyone had to leave. “Let’s go, let’s go, let’s go. We’re pulling out,” said the MnDOT Supervisor.

By 10:40 a.m., the eviction attempt was called off and the authorities and contractors left. No tents were taken, but the residents have since moved to other encampments because of the stress and uncertainty, seeking safety in numbers amidst continuing evictions.

In a revealing twist, Williams, who is also the Chief Financial Officer of the Agape Movement, showed up wearing an inside-out Agape t-shirt with a mask over his face.

Agape was formed after the George Floyd Uprising by elder ex-gang members who work with the city of Minneapolis. Agape’s stated mission is to “bridge the gap between the community and law enforcement.” To this point, they’ve been a city consultant working with the Minneapolis Office of Violence Prevention to do “outreach & engagement” and have mostly provided security for the city in George Floyd Square (GFS). They were contracted for at least $375,000 between 2020 and 2021.

Mostly seen at GFS, Agape members became known widely when they served as key actors in enabling the city to move some of the barricades at the Square on June 3, 2021. Local activists have called them a counter-insurgency force or collaborators, while some others welcome them.

Nonprofit newsroom Sahan Journal obtained and published a 2021 contract (pdf) between Agape and the city that shows their staff were receiving $40 per hour during that clearing. That same day, members of Agape were violent toward several community members, pushing one person onto construction equipment and calling them homophobic slurs, while threatening violence on others.

According to the Spokesman Recorder, Agape stated they were not involved in the attempted encampment eviction on June 1, 2022.

A few days after the attempted sweep, Abolition Media, “an online news source for revolutionary movements,” published a communique on June 4, 2022, that reported that a truck owned by Alfonzo Williams contracting was “torched for assisting the Minneapolis encampment eviction.” It read:

“On the night of June first, we incinerated a truck owned by Alfonzo Williams, chief financial officer of the Agape Movement and owner of Big Top Contracting…

A statement was made that Alfonzo was not there as a member of Agape, but as a contractor. We decided we were about to end this man’s whole career.

We found the Big Top Contracting truck parked up by his house, still attached to a trailer filled with stolen possessions from that morning, and put the flame to it.”

The communique ended with the call-out rising in popularity across the country, “you sweep, we strike.”

Over the last two years, there’s been a budding movement of encampment supporters and militant eviction defenders in Minneapolis. While the modes of support, capacity of the volunteers, and needs of residents fluctuate depending on the camp, eviction defense is only provided if residents ask for it.

Several encampment evictions have been stopped over the last years. One of the longer standing encampments, Near North, with dozens of mostly Black and Indigenous residents, has faced multiple failed evictions and continues to remain a beacon of hope for many unhoused folks.

Continue to follow Unicorn Riot for an upcoming piece on another South Minneapolis encampment.