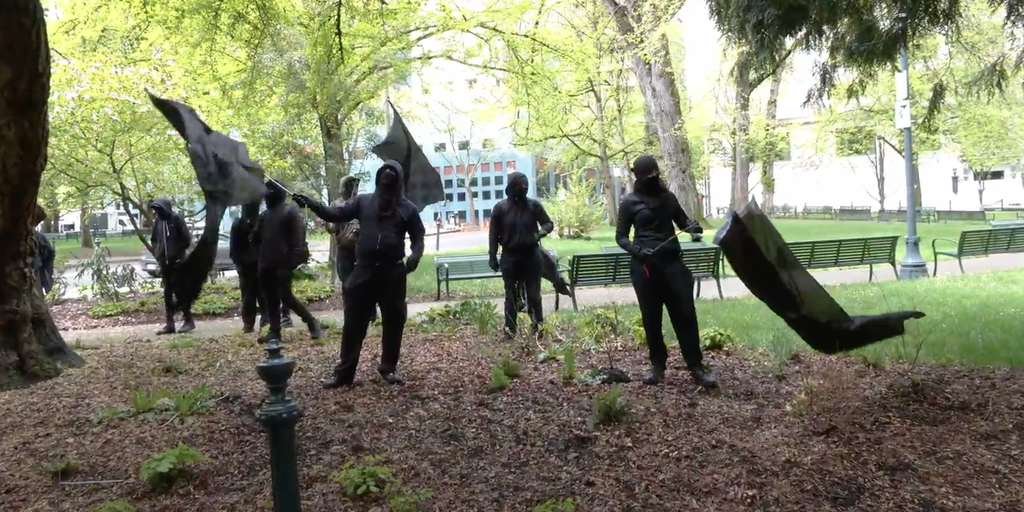 Violent Antifa activists are active again in Portland and Seattle, inspired by a leaked draft of a Supreme Court decision this week reversing Roe v. Wade. Neither city is ready for a repeat of Black Lives Matter-inspired left-wing riots and vandalism. But Antifa is now more dangerous than ever.

Antifa operates most effectively during left-wing movements where they rely on partisan media outlets and like-minded politicians to either justify or ignore their violence. It’s one reason why they pose an enormous threat as pro-abortion activists take to the streets to protest a Supreme Court decision to overturn Roe v. Wade.

In 2020, after the death of George Floyd in Minneapolis, Antifa extremists exploited the Black Lives Matter (BLM) movement. They viciously attacked cops and their political opponents (even murdering one), destroyed property, and took communities hostage with self-governing autonomous zones. They faced little resistance from BLM activists and politicians who benefited politically from the violence.

The goal was to intimidate progressive politicians and silence opposition in order to defund, and eventually abolish, the police. They were largely successful, pushing progressive cities into sweeping changes to policing, while simultaneously cutting police budgets.

Police departments in the Pacific Northwest never recovered and now there’s the resurgence of Antifa. We may be in store for more “mostly peaceful” riots this spring and summer

After the draft opinion to overturn Roe v. Wade leaked, a mob of activists formed at the Supreme Court. By the next day, the mob had grown, inspiring rallies and marches across the country, some turning in violent. In the Pacific Northwest, progressive activists never sit out a political fight.

Hundreds of activists gathered at Lownsdale Square in downtown Portland to protest the Court’s decision. Holding signs claiming that “Women will die” and “We will not go backward,” activists promised to “abort the Supreme Court.”

Similarly, dozens of Antifa took part in a Seattle-based pro-abortion march. They appeared to have little interest in the actual issue, instead taking the opportunity to march to the East Police Precinct, the site of 2020’s Capitol Hill Autonomous Zone, to chant, “I smell Nazis” while waving lit flares in the air. They held a sign reading, “Burn our rights, we burn ur state” with an anarchist symbol. While on the march, they allegedly destroyed a local TV station’s video equipment.

The writing is on the wall: Antifa terrorists are poised to use the pro-abortion movement to continue the violent streak they temporarily ceased when the BLM movement fizzled.

In both Portland and Seattle, activists vow nightly protests. They’re egged on by Seattle’s far-left Rep. Pramila Jayapal, D-Wash., who demands her supporters “take to the streets,” a tone and message identical to what inspired BLM rioters. And they’re doing it at a time when police departments aren’t staffed to handle marches and Antifa violence.

The Portland Police Bureau (PPB) has only 772 sworn members, with just 329 patrol officers between three precincts as the city is on pace to exceed last year’s record-high homicide rate. The police chief believes they should be staffed at 1,100 members. They’re so short that the PPB had to cut its cold case department to move detectives and a supervisor to homicide.

In Seattle, the staffing crisis is even more dire. With roughly 880 officers, the department is short over 500 from the city’s new goal of 1,400 total deployable officers. The Seattle Police Department is forced to augment patrols to meet daily minimum safe staffing levels in every precinct across every watch, borrowing detectives from non-patrol units to respond to 911 calls. Still, as violent crime surges, police are not able to respond to emergencies within a reasonable amount of time.

This provides Antifa with ample opportunity to organize and execute whatever new savage plans they’ve concocted over the last several months. And we’re already seeing their old strategies at work.

They openly organize “direct action” online, not hiding their plans to “gear up” and cause problems. Antifa thugs plan to break the law, so they wear uniforms in the form of black-bloc to conceal their identities from law enforcement.

Online, Antifa and their enablers monitor police scanners, tweeting out intel to their comrades marching on the streets. And when they discover media members the movement deems unfriendly are covering their movement, they send coded (and not so coded) messages online for thugs on the ground to harass or threaten their targets. I’ve experienced this Antifa threat several times while covering their movement in the Pacific Northwest.

Though they often take baby steps before bold chaos, Antifa’s tactics are consistent, so you’d think they’d be easier to control. But with diminished police forces they pose a much greater danger now than they did during the BLM riots.

Antifa is most active in the Pacific Northwest and this time, they may be organizing their terror as police departments are starved of resources and staff. Police were barely able to handle sustained Antifa violence before they were defunded and experienced a mass exodus of staff. What do you think happens when departments that are down hundreds of cops are faced with armed criminals causing chaos?

Portland and Seattle residents may rue the day they let their Democratic political leaders dismantle their respective police departments.

Antifa, however, may celebrate the ease by which they are able to wreak havoc once again.