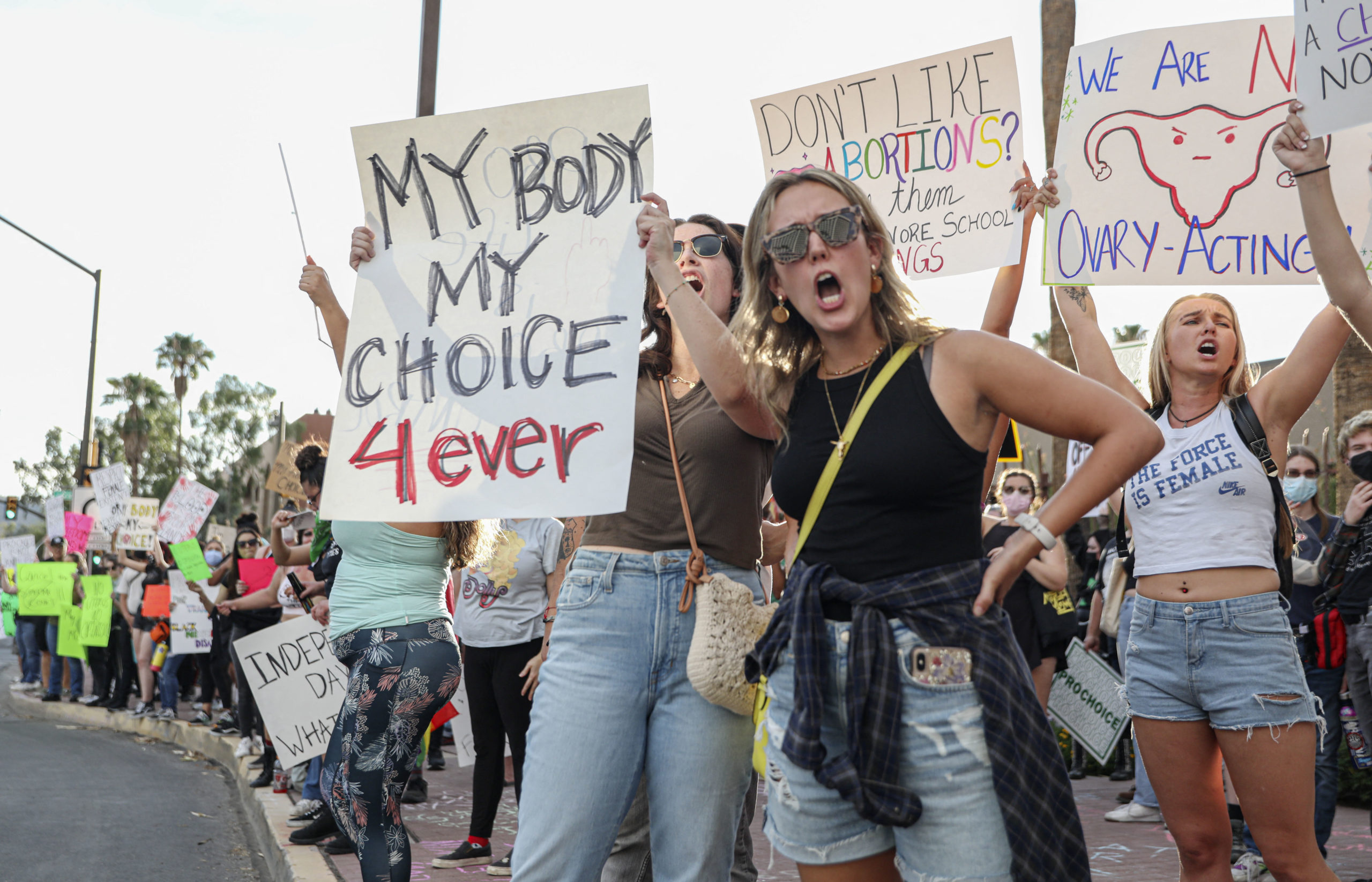 Police in Tempe, Arizona, tweeted on Thursday night that they charged a far-right extremist for spraying bear spray in the faces of several abortion rights protesters and their young children, resulting in their hospitalization.

What the police have not made public, however, is that they have also charged one of the abortion rights protesters.

On Sunday night, a group of abortion rights protesters was standing on a street corner in downtown Tempe after picking up some snacks and drinks from a store. The day’s protests were over, and they were waiting to cross the street to go home when Harrison drove past and sprayed what she herself described as “bear spray” out of the window of her moving car at least twice.

Several people were treated by emergency services at the scene and some were taken away for further treatment, including a nine-year-old boy and a 5-year-old girl.

On Thursday night, the Tempe police department tweeted that they were “actively attempting to locate” Harrison. Hours later, Harrison, who has a long history of attacking protesters and is the leader of the AZ Patriots, “self-surrendered” at 5 p.m. local time, according to an update posted by the Tempe Police Department on Thursday night.

“Jennifer was booked and charged with Disorderly Conduct and Assault. Additional charges of Aggravated Assault will be submitted to Maricopa County Attorney’s Office for review,” the statement, posted on the department’s Twitter account, said.

Harrison, who did not respond to VICE News’ request for comment, claimed she was acting in self-defense in a statement that was briefly posted on her social media channels this week, before being deleted.

As the charges she is currently facing are both misdemeanors, she has been released.

What the department did not make public, though, is that one of the protesters who had been hospitalized as a result of Harrison’s attack, had already been charged with disorderly conduct arising out of the same incident.

Vivika Lofton confirmed to VICE News that she was charged the previous night, though she denies the allegations and says the police have no evidence to back up their claims.

The police say that Lofton put her hand inside Harrison’s car as she was driving past the group of protesters. This is similar to a claim Harrison herself made in a statement she issued on her social media accounts on Wednesday night, before quickly removing it again.

“I’m being charged with the same charges as [Harrison], which isn’t right, because I was the one that was injured and went to the hospital,” Lofton told VICE News, adding that the police told her there was no video footage of her alleged crime.

There were police on the scene monitoring the protesters when the attack happened, but activists who were present told VICE News the officers were too far away to have seen anything and didn’t react quickly when Harrison sprayed them.

Tempe police did not respond to VICE News’ request for comment on Lofton’s charges or the police’s alleged poor response to the incident.

Multiple people were injured as a result of Harrison’s actions, including two young children. A GoFundMe page set up by the mother of the two children who were injured describes the injuries they suffered.

“The pain of being maced is intense and burning, an incredibly strong stinging sensation that does not go away quickly. Additionally, mace reactivates every time it gets wet. This means that every time my children started to cry in reaction to the pain they were feeling, it only made the burning worse. Seeing my children wailing in pain and unable to do anything about it was the most excruciating thing I’ve ever gone through,” the mother wrote.

The money being raised is being put toward legal costs associated with any proceedings that arise from the case.

Harrison claimed in social media posts that she “didn’t expect kids” would be among the protesters she allegedly attacked, but the previous night she berated the same group of protesters and openly acknowledged that a child was there—all of which she livestreamed to her own Facebook page.

This was not Harrison’s first time spraying protesters with bear spray, which is a concentrated form of pepper spray. In June 2020 she filmed herself spraying a girl during a Black Lives Matter protest while shouting through a bullhorn: “Black rifles matter” and “Trump 2020.”

Harrison, who has locked down her social media accounts in recent days, told the Arizona Republic on Thursday: “I have one comment: This was self-defense. I have an attorney, and we are confident that we’ll see this through.”