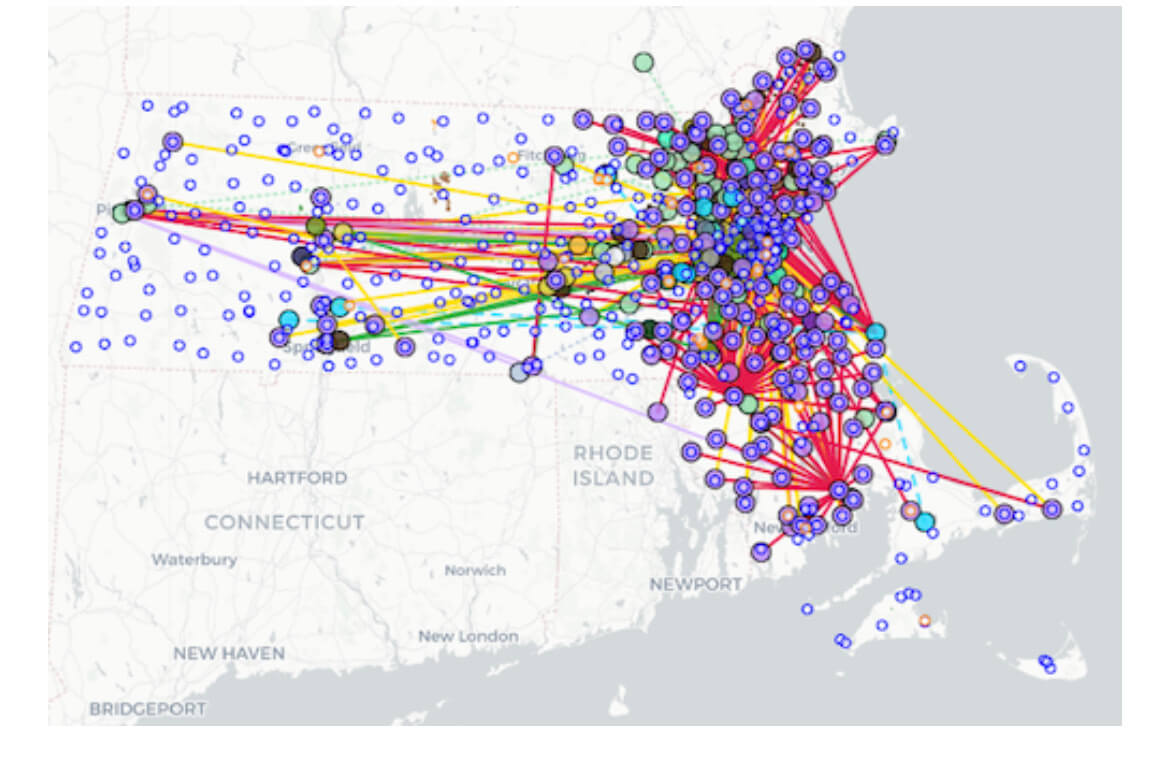 The FBI is looking into a website called the Mapping Project, which published an interactive map of Boston that claims to show “local institutional support for the colonization of Palestine,” the Boston Herald reported.

Joseph Bonavolonta, head of the FBI’s Boston office, told Jewish leaders during a Zoom briefing on Monday that his agents are “very well aware and are tracking the Mapping Project website, and are working to identify additional information regarding this website.”

The creators of the site have remained anonymous and have not responded to journalists’ inquiries. The map has been promoted by the Boston chapter of the Boycott, Divestment and Sanctions movement against Israel.

The project draws what it says are lines of influence among “Zionist leaders” — including Jewish political organizations and foundations,  Jewish day schools and synagogue groups, politicians, pharmaceutical companies and more. The website says the goal is to “dismantle” these institutions.

“Our work is grounded in the realization that oppressors share tactics and institutions – and that our liberation struggles are connected,” the site says. “Our goal in pursuing this collective mapping was to reveal the local entities and networks that enact devastation, so we can dismantle them,” it adds. “Every entity has an address, every network can be disrupted.”

Boston-area Jewish groups have complained that the map’s listing of addresses for scores of Jewish groups — including the Anti-Defamation League, Combined Jewish Philanthropies, JCRC of Greater Boston, Synagogue Council of Massachusetts, Jewish Arts Collaborative and Jewish Teen Foundation of Greater Boston — puts them in danger at a time of rising antisemitism.

Massachusetts Sens. Elizabeth Warren and Ed Markey, both Democrats, have condemned the project, along with several House members, including Rep. Ayanna Pressley, who represents Boston and is part of the so-called Squad of leftist members of Congress who have been highly critical of Israel.

“There is no doubt that antisemitism and organized, violent white supremacy are at a boiling point in this nation and threaten our communities,” Pressley said in her statement. “It is not acceptable to target or make vulnerable Jewish institutions or organizations, full stop.”

During the Zoom on Monday, the Herald reported, Robert Trestan of the Anti-Defamation League’s Boston office said the Mapping Project “calls for a full community mobilization.”

“Our community is not going to sit by, we’re not going to stand by while this antisemitic attack is underway,” the Herald quoted him as saying. “We also need to bring all of our friends, all of our allies, because this type of threat spreads.”

Rabbi Marc Baker, CEO of Combined Jewish Philanthropies of Greater Boston, called the website the “latest truly vile perpetration of hate against the Jewish community and our allies.”

“It’s outrageous and downright scary to see ourselves and our organizations on this list, to see the schools where we send our kids, arts and culture organizations where we are literally creating Jewish life,” he said. “This is a threat to all of us, and we will do everything we can to fight it.”

The post FBI looking into ‘The Mapping Project,’ pro-Palestinian site targeting ‘Zionist leaders’ in Boston appeared first on The Forward.