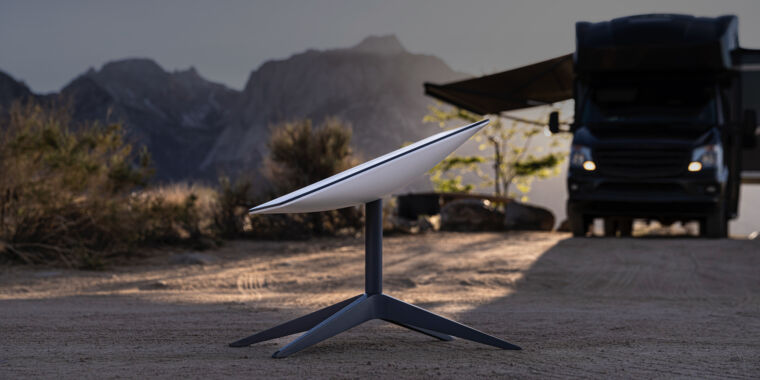 SpaceX has secured US approval to provide Starlink satellite Internet service on moving vehicles, ships, and airplanes. In an order released Thursday, the Federal Communications Commission granted SpaceX’s application to operate consumer and enterprise Earth stations in motion (ESIM) throughout the US.

The FCC also approved a request from Kepler Communications to operate ESIMs on ships. Starlink and Kepler will be allowed to provide service on vessels in US territorial waters and international waters.

Starlink offers a service for RVs but says it isn’t designed to be used while the vehicles are moving. That restriction will presumably be lifted at some point now that SpaceX has received the FCC approval, which says “SpaceX is authorized to operate Earth Stations In Motion on vehicles throughout the United States.” SpaceX is also planning to provide Starlink Internet on flights.

The order issued by the FCC’s International Bureau said granting the applications “will serve the public interest by enabling SpaceX and Kepler to offer expanded broadband capabilities and serve unserved and underserved areas.”

SpaceX asked the FCC for permission to offer Starlink broadband on moving vehicles, ships, and planes in March 2021. SpaceX says it will use ruggedized Starlink dishes that can withstand “harsh environments” with extreme levels of heat and cold. The terminals are too big for passenger cars and are intended for aircraft, ships, large trucks, and RVs, SpaceX CEO Elon Musk said last year.

The spectrum bands used for space-to-Earth transmissions with ESIM range from 10.7 GHz to 12.7 GHz. The FCC is separately considering whether to allow mobile services in the 12.2-12.7 GHz band. Dish Network wants to use that band for its cellular network but SpaceX argues that mobile service in 12 GHz would make Starlink unusable for most Americans because the satellite Internet network uses the same spectrum for downloads.

The FCC order noted that Dish and RS Access objected to the SpaceX and Kepler ESIM applications, arguing that approval “would effectively constrain the Commission’s decision-making in the ongoing 12 GHz rulemaking proceeding” and “complicate the Commission’s ability to repurpose spectrum for terrestrial mobile use.” But the FCC said its approval is constructed so that it won’t limit options for the 12 GHz proceeding:

These services, never before available, promise the potential for expanding reach to remote and rural areas and facilitating higher quality broadband services in the air, on the road, and on the water. We recognize, however, that the introduction of a potentially significant number of additional end users could affect the 12 GHz spectrum environment. We therefore impose conditions to ensure grant of this application does not materially impact the outcome of the 12 GHz rulemaking proceeding.

The FCC said the authorizations are “on a non-interference protected, i.e., unprotected, basis with respect to operations in the 12.2-12.7 GHz band. Therefore, the applicants’ ESIM operations must accept any interference received from both current and future services authorized in the band—even if such interference causes undesirable operations—and must not cause harmful interference to any authorized service, whether licensed or not.”

The FCC required Starlink and Kepler “to disclose to their customers that their ESIM service is being provided under these conditions so that their customers understand that there is no expectation of interference protection. SpaceX and Kepler must disclose the unprotected status of their ESIM offering on their websites, promotional literature, and other means of consumer notifications, including retail locations, online platforms, and telemarketing calls.”

If SpaceX and Kepler accept the license grants, they must “do so subject to the outcome of any future rulemaking, including the pending 12 GHz rulemaking,” which could result in changes to bring the authorizations “into conformance with any rules or policies adopted by the Commission in the future,” the FCC said. Additionally, end-user terminals that are “capable of operating, e.g., receiving, in 12.2-12.7 GHz must also be capable of such operation in 10.7-12.2 GHz.”

We’re trying to clarify SpaceX’s approval to use ESIMs on aircraft. The FCC order said, “SpaceX is authorized to operate Earth Stations In Motion… on non-US-registered aircraft operating in US airspace,” but SpaceX also requested approval to provide service on “US-registered aircraft operating worldwide.” We asked the FCC for an explanation and will update this article if we get more information.