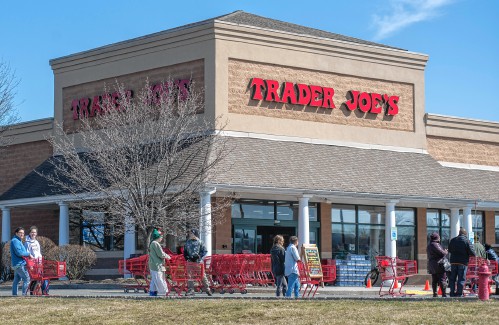 HADLEY — Employees of the Trader Joe’s grocery store on Route 9 have voted to form the national chain’s first labor union by a margin of 45-31.

“This victory is historic, but not a surprise,” the independent union, Trader Joe’s United, said in a statement. “Since the moment we announced our campaign, a majority of the crew has enthusiastically supported our union, and despite the company’s best efforts to bust us, our majority has never wavered.”

The National Labor Relations Board conducted the union election by secret ballot outside the 375 Russell St. store on July 27 and 28. NLRB staff counted the ballots immediately after voting ended, finding 59% of workers wanted Trader Joe’s United to represent them.

A simple majority was needed to determine the outcome.

NLRB board agent Catherine Terrell said there were 81 employees eligible to vote. Seventy-seven ballots were cast and one was voided because the employee signed it or otherwise identified themselves.

Both sides had seven days to file objections to the vote before the results are finalized, Terrell said.

“Trader Joe’s offers its Crew Members a package of pay, benefits, and working conditions that is among the best in the grocery business,” the company said in a statement. “Despite this, employees in our Hadley, MA store recently voted to be represented by a union. We are prepared to immediately begin discussions with union representatives for the employees at this store to negotiate a contract.”

Trader Joe’s said it is “willing to use any current union contract for a multistate grocery company with stores in the area” as a template for negotiations, and that union representatives could choose the template. The company said it is willing to discuss pay, retirement, health care and working conditions such as scheduling and job flexibility.

Maeg Yosef, spokeswoman for Trader Joe’s United, and a handful of other crew members gathered after the vote at Progression Brewery in Northampton for a celebratory dinner. She said the union does not plan to use another contract as a template.

“We’re going to be negotiating a different contract, specifically for us, that the crew wants to see. We won’t be taking any boilerplate template contracts,” said Yosef, an 18-year employee,. The union has received “donated legal support, so we won’t be going it alone, and the legal team is going to grow at this point, so we’re feeling good on that front.”

Although the vote was not unanimous, Yosef said, the union wants a fair contract for everyone in the bargaining unit, which includes the non-supervisory employees known as crew members and merchants. Yosef declined to comment on specific goals for negotiations, but said big issues include worker safety, pay and benefits.

“We’re excited that they’ve recognized us as a union by putting out that statement and they’re ready to move forward and start talking,” said Yosef’s wife, Sara Yosef, another Trader Joe’s crew member who was once a manager.

Backers of the Hadley organizing effort raised concerns about cuts to benefits such as health care and retirement — the company once offered an annual retirement contribution of 15% of previous-year earnings, but that has been reduced to a discretionary payment — and the store’s response to the COVID-19 pandemic, along with what they perceive as a decline in customer experience over the years.

The movement to form a union, which went public in May, drew national media attention and gained the vocal support of members of Congress including U.S. Rep. Jim McGovern, D-Worcester, and U.S. Sen. Ed Markey, D-Mass.

“Congratulations to everyone who made this possible — you are an inspiration!” McGovern tweeted after the vote.

Last month, workers at a Trader Joe’s store in Minneapolis announced their intention to join Trader Joe’s United and requested the NLRB conduct an election.

These developments come amid a surge in first-time unionization at major national and international corporations, including more than 200 Starbucks locations and an Amazon order fulfillment warehouse in New York. Workers at Apple, REI and Lululemon retail stores have begun to unionize as well, along with some Chipotle locations and cannabis businesses.

In April, the NLRB said there were 57% more union election petitions in the first half of fiscal year 2022 than in the first half of fiscal 2021. According to the Bureau of Labor Statistics, in 2021, 6.1% of private-sector workers in the U.S. were members of a union, compared to 33.9% of public-sector workers, and nonunion members earned 83% of the pay that union members earned.

“We now begin the difficult work of sitting down at the negotiating table as equals with our employer, and securing a contract that will benefit and protect us, the crew, instead of the company’s bottom line,” the union’s statement reads. “But for tonight, we celebrate.”

Brian Steele can be reached at bsteele@gazettenet.com.