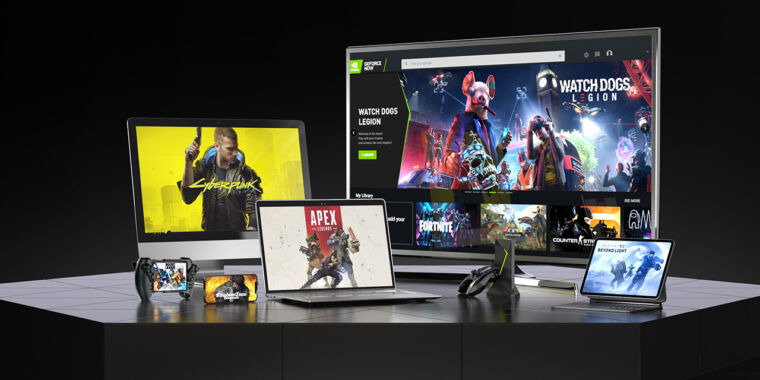 GeForce Now adds Apple Silicon support, making it sort of possible to game on a Mac

Nvidia released version 2.0.40 of its GeForce Now game streaming app earlier this week, and among its new features is native support for newer Apple Silicon Macs.

Like most Intel-only Mac apps, GeForce Now could run on Apple Silicon Macs using the Rosetta 2 compatibility layer. Nvidia says that adding native support for Apple Silicon will reduce the app’s power consumption and startup time and lead to an “overall elevated experience,” though it notably doesn’t mention gameplay factors like streaming quality or input latency.

Apple Silicon Macs from the M1 to the M1 Ultra all have reasonably powerful GPUs compared to similarly priced and specced PCs, but so far, that hasn’t led to an influx of AAA PC titles on the platform. This is partly because Windows enjoys a higher usage share than macOS and is thus a bigger target for game developers. And on the software side, Apple focuses its energy on its own proprietary Metal graphics API rather than supporting the open Vulkan API or modern versions of OpenGL.

We tested GeForce Now’s RTX 3080 performance tier back in October and came away generally impressed with its latency and graphical fidelity. It’s no substitute for having a beefy gaming PC on your desk, but if you’ve been unable to find a GPU or if you’re using a Mac that can no longer boot into Windows because it’s using an ARM chip, it’s a respectable alternative.

As long as you own the games you want to play, a free GeForce Now membership will get you access to GTX 1060-class performance for play sessions up to one hour long. Higher performance, longer play sessions, and RTX-class ray tracing features require paid subscriptions, which start at $9.99 per month or $49.99 for six months.