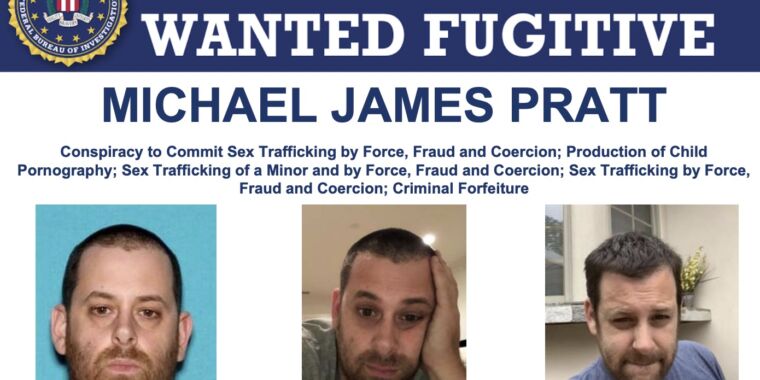 GirlsDoPorn founder, on the run for 3 years, now on FBI’s Ten Most Wanted list

The Federal Bureau of Investigation has added GirlsDoPorn founder Michael James Pratt to its Ten Most Wanted Fugitives list, nearly three years after he was charged with sex trafficking in a US federal court in California. The FBI is now offering a reward of $100,000 for information leading to his arrest, up from $10,000 it offered in September 2020.

Pratt is wanted “for his alleged involvement in sex trafficking and production of child pornography,” the FBI said yesterday. Pratt and others who did not evade capture were accused of “a conspiracy to recruit young adult women and minor girls to engage in commercial sex acts by force, fraud, and coercion.”

From 2012 to 2019, Pratt owned and operated GirlsDoPorn and GirlsDoToys, which generated more than $17 million in revenue, the FBI said. “Locating Pratt is a high priority for the FBI in order to stop him from victimizing anyone else,” Special Agent in Charge Stacey Moy said.

Pratt is from New Zealand but founded GirlsDoPorn in San Diego. “Michael James Pratt preyed on young women and girls and allegedly coerced or forced them through threats and fraud to participate in pornographic videos,” Moy said.

Noting that “Pratt has ties to multiple countries and has the financial means to be anywhere around the world,” the FBI asked anyone with information on his location to call 1-800-CALL-FBI (1-800-225-5324) or submit a tip at tips.fbi.gov. “You can remain anonymous; however, tipsters could receive a reward of up to $100,000 for information leading to Pratt’s arrest,” the FBI said. The agency also said it “believes there may be more victims who have yet to be identified” and encouraged victims to contact the FBI.

Alleged conspirators who were previously arrested include adult film performer and producer Ruben Garcia. In November 2020, Garcia was sentenced to 20 years in prison for conspiring with Pratt and others “to recruit young women to appear in sex videos for adult websites using force, fraud, and coercion,” the Justice Department said at the time. Garcia pleaded guilty to conspiracy to commit sex trafficking by force, fraud, and coercion.

In July 2022, Matthew Wolfe pleaded guilty to conspiracy to commit sex trafficking. Wolfe had filmed about 100 GirlsDoPorn videos, “oversaw the company’s financial books,” and “operated various business entities that were used to promote the business,” the DOJ said.

Other guilty pleas for conspiracy to commit sex trafficking came from cameraman Theodore Gyi and bookkeeper Valorie Moser. Charges against one defendant were dropped.

In a civil case, a San Diego Superior Court judge ruled that the GirlsDoPorn operators owe nearly $13 million to 22 young women who were tricked and coerced into shooting pornographic videos.