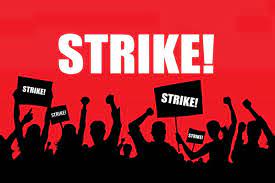 “I voted yes to authorize a ULP strike because we have to stand up for our right to bargain for a fair contract. The fact that the companies are engaging in ULP’s shows that they know we deserve more than they are offering. They just don’t want to give it to us,” says Kim Sisson, a Bargaining Committee member and a Front End Supervisor at Vons in La Crescenta.

“The companies are not playing fair by violating our rights and federal labor laws. After all the hard work we’ve done through the Covid pandemic serving customers so they can feed their families we deserve to be able to feed ours,” says Rachel Fournier, a Bargaining Committee member and a cashier at Ralphs in Los Angeles. “While Kroger made over $4 billion in profits last year, many employees are struggling to make ends meet. This has to change. It is time for the grocery corporations to do better and come back to the bargaining table with an adequate contract proposal that respects our work.”

The ULP charges include unlawful intimidation, harassment, and surveillance of workers protesting low wages and short hours; refusing to implement wage increases as required by the contract; giving small token bonuses when the grocery chains should be bargaining over permanent wage increases, and subcontracting food preparation work to non-union outside companies.

Throughout Covid, grocery store employees worked extremely hard. They stocked shelves and kept the stores clean and open. As employees fell ill and some even died, the companies didn’t provide them with adequate health and safety protections. Employees worked understaffed. They also experienced high physical and mental pressures, employees kept working non-stop to help customers buy the food they needed to feed their families.

Food sales skyrocketed while grocery companies made billions of dollars in profits –Kroger, Ralphs parent company alone made over $4 billion in profits in 2021. This wealth went to CEOs wages and stock buybacks.

A recent study conducted among Kroger employees called “Hungry at the Table” showed that 78 % of workers struggle to feed their families with nutritious foods; over 63 % of Kroger workers have wages that are insufficient to afford basic necessities and 14 % of workers are houseless or sleeping in their car.

For all their sacrifices, hard work, dedication, and health risks experienced during the pandemic, workers deserve better and the companies can afford to improve their contract.

A bargaining committee made up of workers and union leaders began negotiations with the companies in January and bargained for 6 weeks. The contract expired on March 6 without reaching an agreement.

Workers presented reasonable proposals including a $5/hr raise over the 3-year contract, more hours and staffing, and safety in the stores. The companies only offered $1.80 and rejected proposals to improve safety, minimum guarantee of hours and staffing, among other substantial improvements included in the union’s proposals.

UFCW Locals 8GS, 135, 324, 770, 1167, 1428, and 1442 represent over 60,000 employees covered by a Master Food Agreement with Ralphs, Vons/Albertsons/Pavilions, Stater Brothers, Gelsons, and Super A. These negotiations determine key issues like wage scales, progressions, pension, health contributions and the like. The Unions are currently negotiating separately with Gelson’s and Stater Brothers. The impacted employees work at stores spanning from Central California to the U.S.–Mexico border.

Negotiations resume March 30th with UFCW and Ralphs and Albertsons/Vons/Pavilions. No dates have been set yet for a strike.