On Wednesday, the hackers defaced the website replacing its content with a message in support of House speaker Nancy Pelosi’s visit to the country.

“Taiwan numbah wan!”  the message, which is a racist imitation of a Chinese accent that has become a gaming meme, read. “This hack is a retaliation of the DDoS attacks on the presidential website,” it continued, according to an archived version of the site. 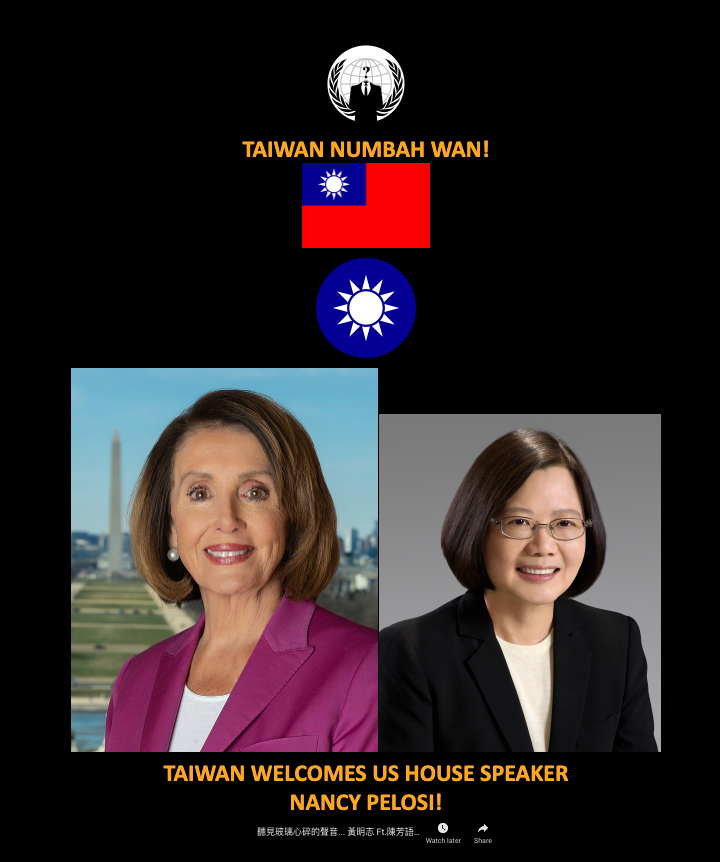 A screenshot of the defacemed posted on the website of China’s Heilongjiang Society Scientific Community Federation. (Image: Motherboard)

On Tuesday, a spokesperson for Taiwan’s president wrote on Facebook that the president’s official website went down for 20 minutes because of an “overseas DDoS attack.” According to a local journalist, the attack flooded the website with traffic “200 times that of a normal day.”

“These are uncoordinated, random, moral-less attacks against websites that Chinese hacktivists use to get their message across,” Johannes Ullrich, Dean of Research at the SANS Technology Institute, a cybersecurity education and research organization told Reuters.

Do you have information about the activities of Chinese, Taiwanese, or hacktivist hacking groups? We’d love to hear from you. You can contact Lorenzo Franceschi-Bicchierai securely on Signal at +1 917 257 1382, Wickr/Telegram/Wire @lorenzofb, or email lorenzofb@vice.com

But the outage of the president’s official website could just be “a slight overload of traffic” due to “people hitting the refresh button,” Dmitri Alperovitch, a cybersecurity expert and chairman of the Silverado Policy Accelerator, told The Washington Post.

“True, there is one China, but Taiwan is the real China while yours is only an imitation straight out of wish.com,” the hackers wrote on the Chinese government website.

The hackers also embedded two videos: one of the song "Fragile," by Malaysian rapper Namewee and Taiwan-based Australian singer Kimberley Chen; and one that plays Taiwan’s national anthem.